As part of her 'Manglish' workshop at a Pedagoo 'Love Libraries' TeachMeet, AST Leader Lisa Ashes demonstrated a fun collaborative learning method called 'Thought Bombing' which teachers can use when there are multiple concepts or ideas that need to be considered. Each 'bomb' is a minituare sized hollow where slips of paper are put in describing one aspect of the subject, and is stuck to the relevant part of a picture.

Instead of forcing children to learn ideas, we like this idea because they are actively taking the 'bomb' from the picture and learning from it - which in essence is motivating them to do individual research and analysis, while collaborating at the same time. 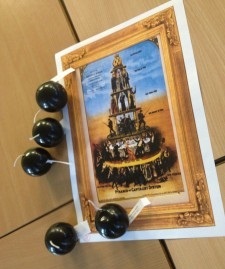 As I am still working on the book version of my new 'Manglish' workshop, I will avoid writing about the ins and outs of it and instead share with you one simple idea for encouraging effective communication. This idea seemed to go down very well both in Edinburgh and at the recent TeachMeet English in Leeds so I thought it might be well worth sharing.

Below is a generic example of an exercise that you could base your own ideas for thought bombing on. This example could be translated into introducing characters from novels or poems (English); exploring the lives and decisions of historical figures (History); looking at cause and consequence (PHSE); Exploring bodily functions (Biology). The list goes on.

The idea is that pupils are given a small amount of information to get them hooked and then the thought bombs are thrown in to 'blow their minds'.

Going SOLO: An introduction to the taxonomy everyone’s talking about

The Structure of Observed Learning Outcome (SOLO) taxonomy aims to show pupils how to develop sophisticated responses to questions by getting them to examine their thought-process as their understanding of a topic improves. I began using SOLO in 2011, and it is now integral to my teaching.

SOLO defines five stages of understanding for any topic: prestructural, unistructural, multistructural, relational and extended abstract. The first three involve gathering relevant information. The other two are about using that information: linking facts and findings, questioning existing ideas about the topic, and forming new theories.

All well and good. But how does it work in practice? Here’s a simplified example of how SOLO can help a pupil with little knowledge of a topic develop a sophisticated understanding of it and see the thought-process that got him there. In our imaginary lesson, the goal is for pupils to write an essay exploring the choices Johnny Depp has made in his acting career. 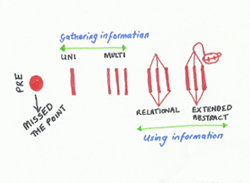 I have it on good authority that autonomy is a problem when our sixth formers leave us for university life.

Helping pupils recognise their learning and find ways to enhance their own exploration of the world in which they live, encourages autonomy; this must be developed earlier if we want to avoid spoon-feeding GCSE students and sixth formers forever, damaging their chances when their apron strings are finally cut.

One of the reasons that I use SOLO is that it is an accessible way to get pupils to see and understand their own thinking. SOLO provides teachers and pupils with a clear path to higher order thinking.

Students are taught the features of each level and how each level leads to the next; with development, our students are able to use their understanding of their own thinking to forward their learning into synthesis.

Marking method: Plus, Minus, Equals

It is great to know that peer assessment can be a time saving, effective form of feed forward. However, we cannot expect our pupils to complete all of our marking… can we? Teachers hate marking books! I have never met a teacher that said: “I have a lovely big pile of books waiting to be marked on my desk; I can’t wait to get started!” Marking takes time that teachers just do not have.

Assessment of any type is completed to provide pupils with a way of moving forward with their learning. It should not be completed in one large batch just before a work trawl. The marking method that follows was developed as a result of me wanting to mark every piece of work that pupils complete but simply not having the time. I took an existing idea named plus, minus equals and developed my own method of delivery that helps me save time while still effectively assessing pupils’ work. 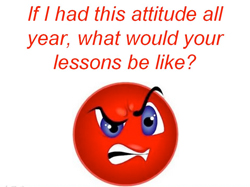 First lessons can be great fun! Most pupils still look neat and tidy and possibly even eager to learn; they are at the very beginning of the honeymoon period and you still have a chance of making a great first impression on them. You are all rested after a long break and the marking has not yet piled up on your desk so you feel a little less stressed than usual.

However, if you have left all of your planning to this final weekend of the holidays and still feel a little groggy from all the sun and sangria meaning you now don’t know where to start, you can use the following reflection to give you some inspiration for that first lesson back. This is how I am going to start my year with Year 9. 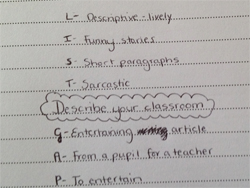 As the end of this academic year draws ever nearer, our GCSE pupils may be in need of a little guidance in preparation for their forthcoming English exams. I can remember being unsure how best to revise for English when I was at school. It is not always as simple as learning facts and regurgitating them in order. Once you know that poem or that story, what do you do with that information? Once you have the names of all of the writing types and their language features under your belt, what do you do with them? Having spent the last year teaching pupils how to use SOLO effectively, I am now using SOLO as a tool to help them revise. I will share as many ideas as possible over the next few days including: reading, writing, contemporary texts, poetry and finally some in class, last minute revision ideas. I hope you find it useful.