App combos with the iPad

David Andrews formed Mr Andrews Online back in 2012 with a vision to deliver better learning experiences for children using mobile technology. Since 2012, he has worked alongside hundreds of schools and teachers, delivering classroom experience days for Primary school children up and down the country. He has recently written a ‘Creative Computing Curriculum’ for a leading Academy, as their previous scheme had become stale and didn’t allow the teachers to exploit cross curricular opportunities. They wanted the scheme to ‘wow the children and be aspirational’.

Website: www.mrandrewsonline.co.uk Email This email address is being protected from spambots. You need JavaScript enabled to view it. 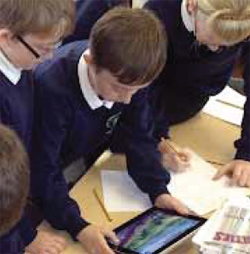 This article originally appeared in the September 2012 Innovate My School magazine.

The iPad is perhaps the most talked-about piece of technology in teaching. Enthralled by tales of educational potential and egged-on by technophile staff, head teachers might be forgiven for investing in the trendy tablets without fully considering how they should be used.

Google Earth is certainly good for familiarising children with foreign geography. Socrative provides a quick way to gauge a class’s progress. The Numbers app enables pupils to produce spreadsheets and graphs, and the Math Bingo game can help them learn arithmetic.

But these programs (or very similar ones) are available on any computer with internet access.

The point is that for many tasks - including essay writing and accessing information - iPads are probably no better than desktops or laptops. Lacking a keyboard, they may even be considered inferior for some purposes. And are the mathematical benefits of Math Bingo really best realised when every pupil in the class is playing the game on a separate device?

Schools that introduce iPads without proper planning do not only incur unnecessary costs: they are likely to overlook the tablets’ subtler benefits.

From bikers to writers

One such benefit is that many of the iPad’s apps either integrate with one another or can easily be used together. This makes it an excellent platform for extending the scope of projects and for teaching children how to find and combine the best tools for a task.

Consider the popular Bike Baron game. The player controls a stunt motorcyclist, rolling, flipping and tumbling through sequences of ramps and loops. The graphics and sound are lively and the levels are short: a few minutes of gameplay is sufficient to provide enough material for a project.

The teacher could tell the pupils to play through one or two levels and to take five or more screenshots as they do. Then they can be shown how to import these screenshots into a comic strip app such as Strip Designer, and how to add captions describing the Bike Baron’s thoughts and feelings. As a follow-up exercise, pupils could use a word-processing app to write an account from the Bike Baron’s perspective - “The Day I Jumped The Ramp” or “The Life of a Motorcycle Daredevil”. Working in pairs, they could even use a movie editing app (iMovie, for example) to conduct an interview, with one pupil taking the role of the Bike Baron. Finally, their work could be posted to a class blog via an app such as Posterous or Blogger. 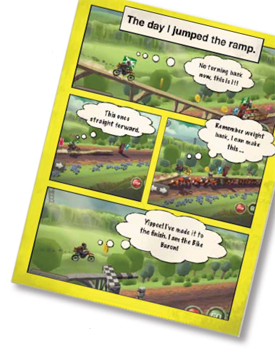 The knowledge that their finished work will be published online reminds children that they are producing it for a particular audience and purpose. It is easy - with classwork and homework - for pupils to lose sight of this, and to feel that they are simply producing something to be seen and marked by their teacher. I also find that getting pupils to publish their writing on a blog and their videos on iMovie or Vimeo encourages them to take extra care with their work.

There are many other app-combo possibilities. Once their SATS were finished, I gave my Year 6 class a two-week project to build controllable vehicles. Working in groups of four, with one iPad per group, the children followed an instruction video, which I and a colleague had developed using the Creative Book Builder app, to guide them through the construction of their vehicles.

Once the vehicles were built, the children planned, filmed and edited a car advert in iMovie, incorporating a jingle created using the GarageBand app, and produced a persuasive and informative car brochure with Creative Book Builder. They used the Posterous app to write a blog about their work, and the Numbers app to create a spreadsheet that summarised the components used and calculated the cost of constructing their vehicles. A presentation to parents and other pupils rounded off the project.

With practice, pupils should be able to select a suitable set of apps for a task or assignment. This skill of finding and combining the best tools for a job is especially useful in modern software development projects, which often require a combination of different platforms, code libraries and programming languages.