Are some school leaders too compliant?

Kevin became a teacher in 1977 and has been head of department, key stage coordinator, and assistant principal. He now works as an educational consultant in a range of roles. Kevin is also an author of educational resources (you can find his new range of posters here), and runs a range of teaching and learning workshops including managing learning needs and his concept of “Learning Intelligence” or “LQ.”

Website: www.4c3d.wordpress.com Email This email address is being protected from spambots. You need JavaScript enabled to view it.

Leadership is important. Google “leadership” and you get definitions, styles, skills, theories, books and courses. What can I hope to add to what has already been written? Well, this article is more about working with leaders, being led by good and poor leaders, identifying true leaders, and discussing those who are simulacrums.

You may not think education leadership is any different to any other form of leadership, but I believe it is. Yes there are similarities, but the process of becoming a leader and of being a leader is somewhat different. There is a common driver between wanting to become a teacher and wanting to become a leader of teachers, that of ‘making a difference’. I believe that, in the best of circumstances, it is this drive that puts people on the path to leadership. It is a simple case of a desiring a greater influence over what goes on in the classroom, in the school corridors, and in the various meetings. But what of the worst of circumstances? This is a different path, one with different drivers and, most significantly I suggest, a lack of an educational vision by those who pursue it.

The nurture/management/authority/administration balance of leadership influence

In my four decades in education I have witnessed a change in leadership expectations and new opportunities for a much wider sphere of influence. Like all opportunities, though, while they may be present this does not guarantee that they are taken up. Administration has always been part of the leadership role, but I have my concerns over how dominant it has become - ie, what percentage of time is taken up with ‘tasks’? My worry is that leaders may not recognise their wider responsibilities of nurturing those they lead, or have the time to do so. The quality of leadership needs to be judged on more than performance statistics.

I strongly believe that in education the key role of leadership is to both protect and foster the teacher/learner environment. I could talk of ‘mission statements’, but few really understand what they are or how they should be used. In my view, they should be a yardstick by which all leadership actions are judged, and not a product of corporate marketing.

Here are some key observations from my career in education:

1. All teachers are leaders, they lead the learning of their pupils. This relationship is no different to the relationship between any leader and those they lead. The maxim of “lead by example” is often forgotten by teachers; they forget what it is like to be a learner. This makes them both poor leaders and poor teachers: poor leaders because leaders should never stop learning from those they lead, and poor teachers because forgetting the anxiety of learning, the need to belong, of having to face choices and needing a voice, will limit your ability to build learning relationships.

2. The route to school leadership is based on teaching less. Doing less of the things you love doing, things that brought you into teaching in the first place. At first this would appear to suggest a conflict, but one former headteacher shared what drove her to be a school leader; it was “the sphere of influence” factor. The more responsible the position, the greater the sphere of influence you have. Whilst it is true you can influence others without holding a position of leadership, especially through the opportunities of social media etc, it is much harder to achieve the same level of effective influence. There is certainly passion and belief attached to this drive, to have influence, but perhaps also ego. These are difficult things to balance in leadership roles.

As a teacher you have influence on the pupils you teach. As head of department, this extends to the teachers in your department. As a leader of a school, it extends even further to the pupils and teachers in your school (it’s arguable that you have an influence in the community too). Others are driven to be leaders by other motives; those of ambition, status, responsibility, notoriety. It often strikes me as strange, though, that we draw school leaders from a pool of talent that came to teaching to teach, and many may be poorly suited to school leadership despite pursuing such ambitions. Perhaps that is one reason for leadership books, courses, and even qualifications. There is more about suitability for leadership in my next observation.

3. This observation is about the nature of teachers, and I know there are exceptions, but bear with me. I have a theory that we explore careers which reflect the environments we favour, that we feel comfortable in, have the talent for, or are thrilled by. Fate may decide that this is not where we end up, but that’s another story. I would argue that those who are successful in school, who enjoy school and benefit from the rewards of being compliant (a behaviour I would argue is a requirement for success as a pupil in school) will tend towards seeking out careers with a similar environment.

Teaching is one such career. The result is, since teachers were compliant students, they become a compliant teaching workforce. This has its benefits, but when we consider many of the leaders we hold in high regard, they are mavericks, non-conformists, even rebels. It begs the question about the suitability of compliant leaders when it comes to doing what is right rather than what is required. There is certainly a case of “horses for courses”, and at times any organisation will require different styles or types of leadership. However, this is another example of how leadership differs in schools.

Education is exposed to political will, ideas and pressures. Schools are not autonomous and be it a board of governors, an academy chain, local authority or any other body that is responsible for the school they ultimately set policy. Where that influence extends to inspection, standards, and regulation (as in the Government) a particular set of powers are employed to direct what happens in schools. Many leaders in schools (at all levels) may disagree with policy but few will be obstreperous. A few will find creative ways around the direction and quietly do what is right other than what is required. Ultimately though, unless successful, there is no reward for challenging policy or being anything other than compliant. This creates its own set of problems for leaders in schools, how to operate a sphere of influence in line with their own experience, philosophy, and ideology when it is in conflict with a government directed policy. It is also responsible for setting up a certain style of leadership, one that is to do more with “enforcing and regulating” than engaging and enabling.

4. Both within and outside of education, there are two types of leaders. I am not talking about styles of leadership; anyone can adopt a style, or at least try. I am suggesting that there are those for whom leadership comes naturally, and those who aspire to leadership but who lack the understanding and drive to truly understand what leadership is about. Knowing which one you are working with is essential for your own wellbeing. You can tell which one you have by observing and noting certain behaviours. The first type of leader is the true leader, and the second is a simulacrum, an imitation that looks like the true leader but gives themselves away in the following manner. I have tried to layout in the table below what their approach is, and what happens to individuals and teams when being led by each type of leader. 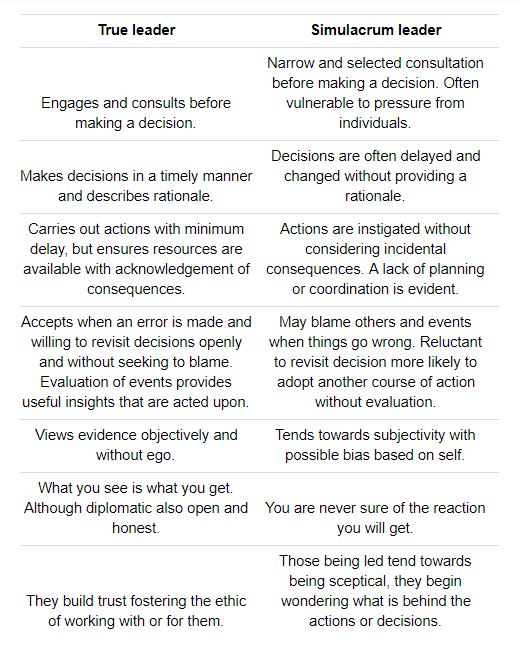 My own approach to leadership

So there you have it, a practical look at leadership in education. As for my own approach to leadership, it is best summed up by the mnemonic “ENABLE”. I see this as the most apt verb to describe the actions of a successful leader.