As teachers, we all think about ways in which we can make what our students are learning in the classroom more relevant to their real lives. One of the ways we can do this is by inviting external speakers to come and give presentations for our students. For example, last year I invited a researcher from a local university to come and talk to my Year 13 students about the evolution of drug resistant malaria on the Thai-Cambodian border.

This served a number of purposes. It helped my learners to link their evolutionary theory with real-time evolutionary processes that have a direct impact on human health, it was a public health issue that was geographically close to them (the Thai-Cambodian border is only around 250 kilometres from Bangkok), and the speaker was a Thai scientist with an international research profile, who gave her presentation in English, and was therefore a great role model for my students.

“A colleague and I invited a team of international researchers from the Mahidol-Oxford Research Unit."

While having an external speaker give a presentation is an excellent opportunity for learners to interact with a professional, ask questions etc, it is even better if there is a way to make it a more interactive experience for them. So this year we went a step further; a colleague and myself invited a team of international researchers from the mathematical modelling group of the Mahidol-Oxford Research Unit here in Bangkok to run a day-long mathematical modelling of infectious disease workshop for our Year 13 students. This is a genuine workshop that the group regularly runs, often for policymakers and health officials who are interested in epidemiology but are new to mathematical modelling.

Prior to the workshop I gave my students an activity to refresh their knowledge of infectious diseases. I began by showing them headlines of the recent Mers outbreak that had killed several people in Korea. I asked them to work in groups to come up with questions that they might need to ask in such a situation, to simulate the kind of activity that a public health outbreak control team would carry out. However, to really get students thinking for themselves I told them that for the moment, during this emergency, the Internet was down so they would have to develop their questions without recourse to Google!

Learners discuss infectious disease epidemiology prior to the workshop.

They found this amusing and it worked well as an engagement tool. Once they had spent twenty minutes or so formulating their questions, I asked the different groups to call out their questions and I summarized them on the board. Then I told them that the Internet was working again, and asked each group to find answers to the questions they had developed for a particular disease. The students were able to choose a disease from a list I provided or choose one of their own. What I was aiming for here was to have the groups working on a variety of diseases based on their causative pathogen, their route of transmission, and so on.

For the mathematical modelling workshop itself, the research group's facilitators included a variety of individuals who provided excellent role models for our Thai learners. The head of the group, Dr Lisa White, is an experienced female researcher originally from the UK, while her deputy, Dr Wirichada Pan-Ngum, is an accomplished female Thai scientist. There were also two PhD students facilitating: Angela Devine, from the USA, and Nattwutt Ekpirat, from Thailand. In addition, the group's administrator, Diva Franssen, was also on hand to help out. It was great to have such a mixture of role models: female, male, Thai & non-Thai. The presence of strong female role models in STEM was particularly well-timed, coming shortly after Dr Tim Hunt's comments about women in science.

After an introduction to what mathematical modelling is all about, there was a practical activity to model infectious disease transmission. This was a fun activity that the students really enjoyed. It involved using coloured plastic balls to simulate the various immune statuses of individuals during a disease outbreak: susceptible, infected, or resistant. This activity generated data for the next practical sessions, using a trial version of the mathematical modelling package Berkeley-Madonna to begin modelling the data. The data generated allowed learners to begin working on a simple SIR (susceptible, infected, or resistant) model. Later this was expanded to incorporate a more complex SIRS (susceptible, infected, resistant, susceptible) model.

In the afternoon there was a presentation on how mathematical modelling can be applied to health economics, with measures such as QALYS and DALYs discussed. This was followed by a brainstorming session, where students got into groups to come up with ideas for research projects which could use modelling. Some great ideas were put forward, including how modelling could be used to provide better quality school lunches, and a project to investigate Bangkok's notoriously bad traffic. This latter suggestion was particularly perceptive, since mathematical modelling does play a major part in traffic management in some countries, such as the UK! 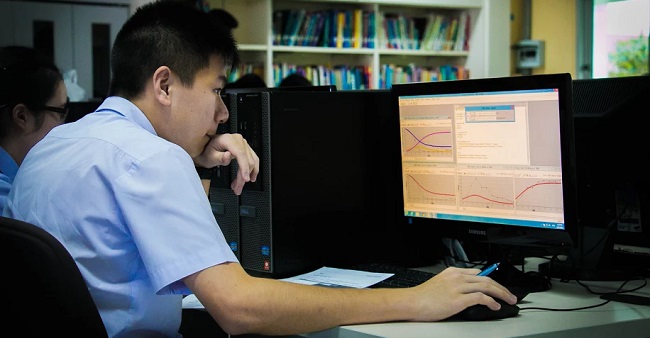 Following the workshop, students were asked by me to complete anonymous evaluation forms for the workshop. Analysis of their feedback suggested that they appreciated the opportunity to learn about mathematical modelling, but that they also really enjoyed gaining some insights into the lives of working scientists. I have since passed on the students' feedback to the team. I think that they may have been a bit taken aback by the how blunt high school students can be! However, they found the feedback informative and useful, and are currently incorporating my learners' suggestions into their workshop plans. We hope to run the workshop again next year, and are in the process of developing a more active programme of activities, which will address the feedback gained from this year's learners.

I would love to hear feedback from other teachers who have tried something similar, or who have any suggestions for ways to improve this kind of activity.

Have you run similar workshops in your school? Let us know in the comments!