Having huge amounts of fun with teaching Shakespeare!

Its was a with some trepidation and a little fear when our head said to us about teaching Shakespeare as a topic. This was shaped by my own experience with Shakespeare at school, which basically amounted to reading from a book and having little to no understanding of his fantastic language. After a staff trip to the Globe in London for CPD and some inspiring ideas shared I was happier, even a little excited about the prospect of teaching Shakespeare to 7 and 8 year olds. My class were called The Tempest - this was primarily the play I concentrated on - but many of the ideas I used could be used and adapted with any Shakespeare play.

My first wish was that I wanted the children to act. I wanted them to have an idea of the language Shakespeare used and the story he was trying to tell, so I used this great book: 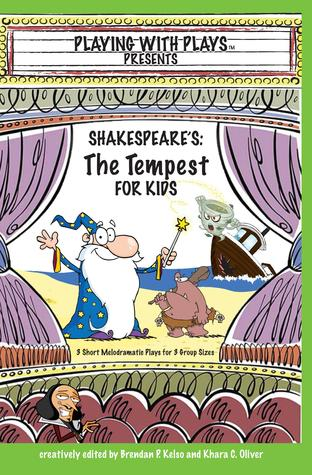 Adapted by Brendan P Kelso, these terrific books (others are available) have play versions suitable for children that mix modern language and actual Shakespeare quotes to make Shakespeare more accessible. I was mindful not to reveal or even read the story of the Tempest myself, so that as we worked our way through the story I could theorise with my class what may happen next. The story was brilliant; full of magic, intrigue, revenge, monsters and romance. My class loved acting out each part and children were chosen at random to act. As an added bonus we were also able to Skype the author Brendan P Kelso for a Q&A session.

One of the most intriguing characters in The Tempest is Caliban: the part-man, part-fish, part-devil creature that lives on the island. What is interesting about him is that we know little of his life before Prospero arrived on the island. We know his mother was the witch Sycorax, but not how he arrived at the island, who his father was, etc etc. Using the origins of superheroes as a hook, I asked my children to write origin stories for Caliban: there were no right or wrong theories, but pupils had to use what they knew to create that story. The children loved coming up with this backstory for Caliban. You can read some examples of the work they created here.

A simple but very effective activity, using just shaving foam and ink you swirl the ink into the shaving foam then lay sugar paper onto it. Once dried, cut out black sugar paper to help depict the opening scene from the Tempest. Looks great but smells good too:

I used the beginning of this as an observed lesson, I put signs around the classroom, each wall was a different sense and I encouraged children to use post-it notes to describe what they could see, hear, taste, smell on Prospero’s island then place the post-it note on the correct wall. Children then looked at the post-it notes and ticked their favourite descriptions, I then went on a tour of the island with the class using their favourite post-it notes to describe the island. This was the basis for their plan which they then wrote and I recorded over the rest of the week.

Possibly the most popular activity that we did, and one we performed to parents during our Shakespearean Summer Fayre.

Using the ‘Shakespeare Insult Generator’ the class generated and wrote insults, before performing them in an insult duel. The generator can be downloaded here: http://playingwithplays.com/shakespeare-insult-generator/

This was a great activity to tick the speaking and listening boxes - take a look at our insults below:

In conclusion, there are a whole host of great ways you can teach and learn about Shakespeare. Luckily we have the internet, and most notably Twitter, for inspiration. Personally, I cannot wait to teach Shakespeare again and once more use some of these activities, as well as others that I seem to be finding out about daily. If this has been of any use to use, please comment below and let me know how your Shakespearean teaching is going

Have you used similar tactics? Let us know below!