How I use scenario-based learning in the classroom

Peter Lee joined the teaching profession in 2004 initially via the Fast Track programme. He was worked in four inner city Birmingham schools and held the roles of head practitioner, head of department, head of faculty, assistant head and assistant vice principal. He is currently the vice principal at Q3 Academy and will be head of school for the new Q3 Langley opening September 2016. He has written widely for The Guardian Teacher network and spoken at a variety of events including the inaugural SLT Teachmeet and most recently the Academies Show in London (April 2015).

Website: www.q3academy.org.uk/ Email This email address is being protected from spambots. You need JavaScript enabled to view it. 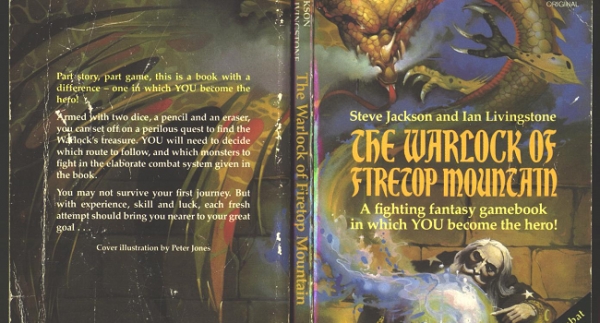 Scenario-based learning is a type of lesson planning methodology that I have used, developed and enhanced since my PGCE year. Its roots come from my childhood love for the Fighting Fantasy books that I was bought by my parents to try and encourage me to read in the mid to late 1980s. In these books you had to make decisions that moved you to different pages and ultimately trying to get to the end of the story. Don’t worry; I grew out of this phase and definitely never entered a Games Workshop.

"I can really delve and probe with my questioning at the time of each decision and event."

In my PGCE year inspired by the work of the brilliant Russel Tarr (of Michael Gove/Mr Men fame) and his www.activehistory.co.uk website. He had several – mainly text based – adventure simulations. I felt they really encouraged students to think about a topic they are studying and allowed them to think critically in a way that a traditional textbook portrayal of the story could not. When I couldn’t book a computer suite to allow the class to take part in one of these scenarios I decided to create my own version for the conquest of England in 1066. Almost immediately I found that students got the ‘hook’ and were engaged thoroughly with the content.

Fast forwarding to my NQT year, and then subsequent promotion to head of department, I began to write a series of these lessons. Generally speaking they followed the same format.

The topic areas that I covered included the rise of the Nazis, Vietnam, 1066 and the Norman conquest, The English Civil War and the Appeasement in the 1930s. Quite often I found that these were the most popular lessons in any scheme and students often requested that we revisited them during revision. 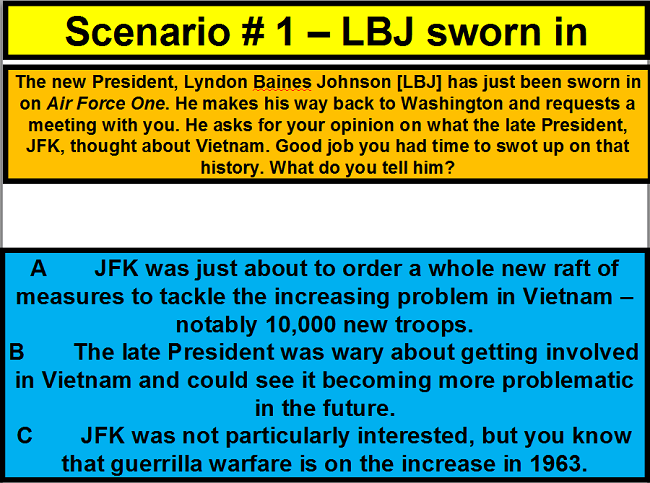 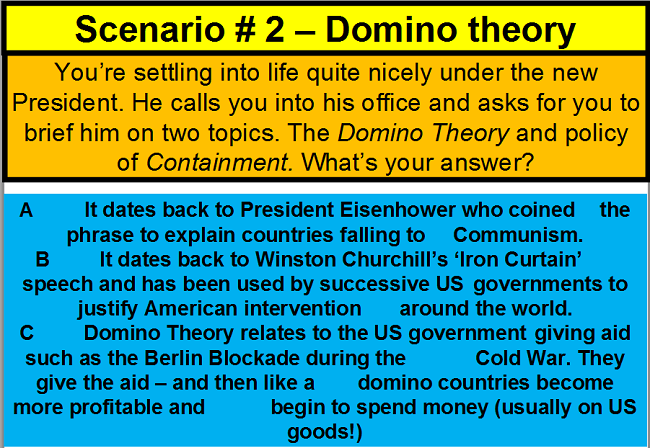 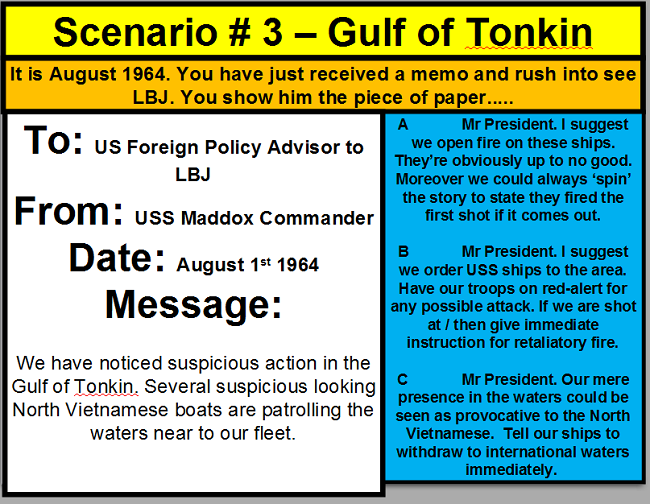 Upon moving to my current school, Q3 Academy in Birmingham, I was fortunate to see this technique in action at inset delivered by the late and great Paul Ginnis. He chose the topic of the Mughal Empire and delivered a model lesson to our staff team in 2013. He slightly tweaked the delivery – mine had always been very teacher-led although, students worked in pairs and groups. In his ‘lesson’, the scenario cards were located at stations around the room and a defined period of time was given for all the scenarios to be completed. I’ve tried delivering like this and re-wrote my Vietnam one, but prefer my teacher-led from the front as I can really delve and probe with my questioning at the time of each decision and event. I was able to share this technique with colleagues in humanities and we even re-wrote one of Sociology lessons looking at coalition education policy and entitled Play as Gove. Again this was well received by students who commented at parents’ evening how it was the lesson they felt they learnt the most during the year.

We subsequently have tweaked several of the lessons and included Monopoly money to add more challenge and competition. Anyone who is thinking about planning a lesson(s) in this way is more than welcome to get in touch with me via the contact details below.

Have you ever used scenario-based learning in the classroom? Let us know in the comments.