How to trap the Tooth Fairy: iMotion and iMagination

I recently came across the above quote on Twitter. Needless to say, it doesn’t apply to me, and if the prospect of glitter on your classroom carpet brings you out in hives, you probably shouldn’t read this!

It’s lucky our cleaners are such good sports, as it took a couple of dolls from Argos, some balloons, the iMotion iPad app and bucket-loads of glitter to pull off my recent Year 1 topic on fairies!

It began with Freddie and the Fairy by Julia Donaldson. If you are unfamiliar with the story, here are some of our Year 1 pupils retelling the story with actions:

On the first day, the children came in to find that a fairy door, a note and a sprinkling of fairy dust had mysteriously appeared in the classroom. Whomever had visited during the night had also left balloons hanging from the ceiling!

The note was from Bessie-Belle (the fairy from the story), challenging the pupils to complete her rhyming challenge. The challenges were hidden inside the balloons. Here’s an example of one of the challenges, which is a quote from the book with the rhyming word missing.

Naturally, the excitement level in the classroom was sky-high as the children popped the balloons and frantically searched for the hidden challenges. This blog post shows the balloon popping in action!

Pupils then had to pass the final rhyming challenge to conjure up a copy of the story.

Just like Freddie, they wrote their own wishes for Bessie-Belle to grant: 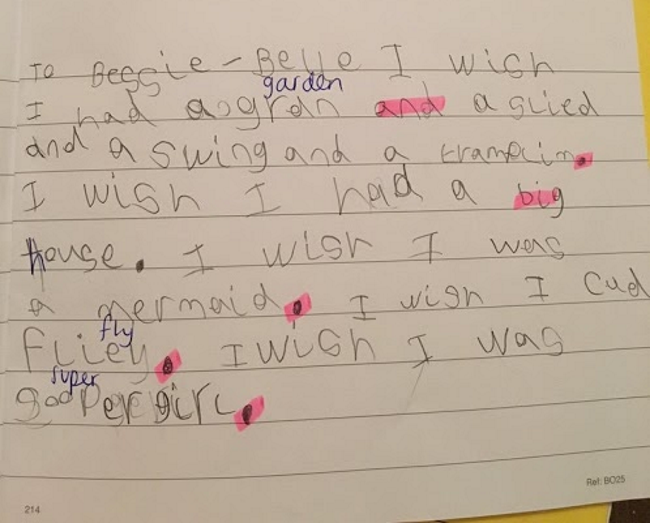 We used the text to teach the conjunctions ‘but’ and ‘so’ within English lessons. 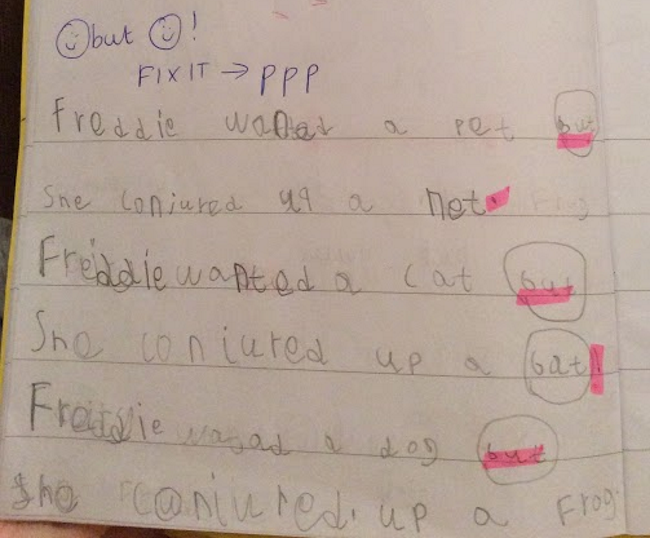 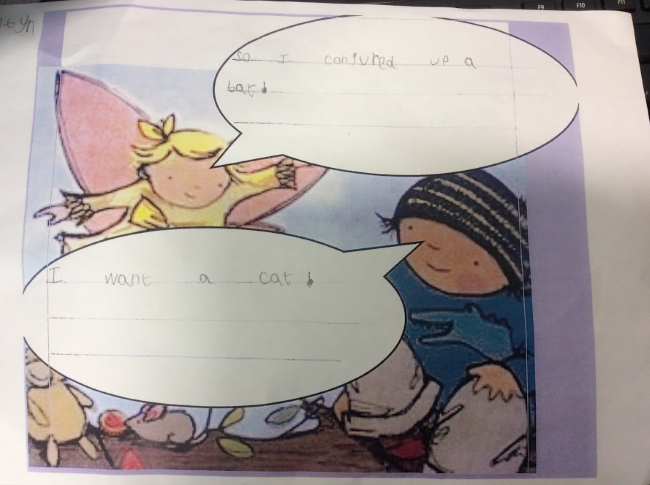 Finally, after using the ‘Talk for Writing’ approach to learn the story with actions, pupils wrote their own versions of the story: 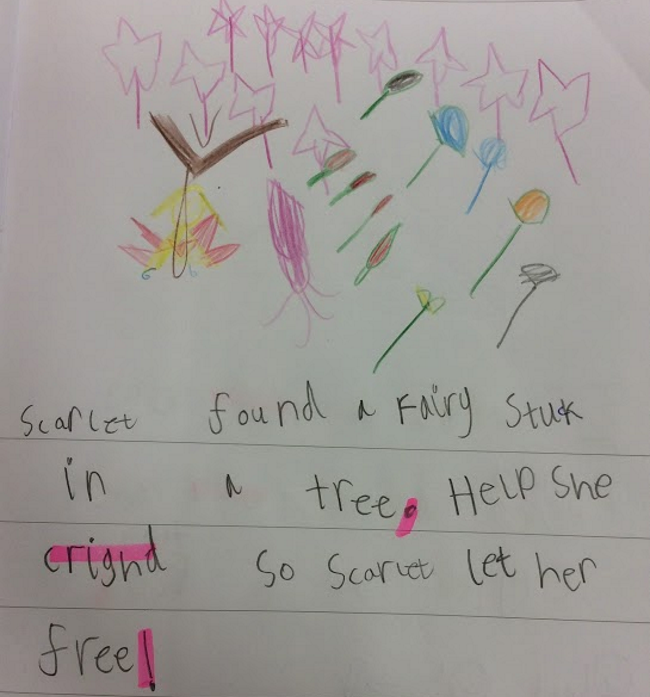 The following week’s text focus was Peter Pan, and pupils arrived at school to find Tinkerbell unconscious in a fairy den! 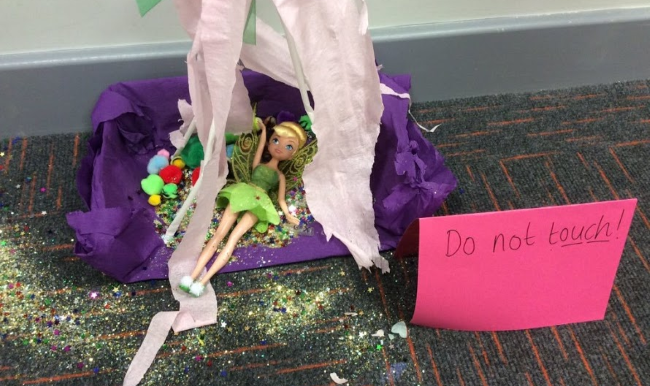 We watched the classroom CCTV footage, showing Tinkerbell drinking the poison and received a chilling message from Captain Hook, who admitted to poisoning poor Tink. He challenged us to make an antidote to revive her. You can watch the videos and the CCTV footage (made using iMotion) on this blog post.

Luckily, Peter Pan had left us some magical ingredients and a set of instructions to make fairy medicine. 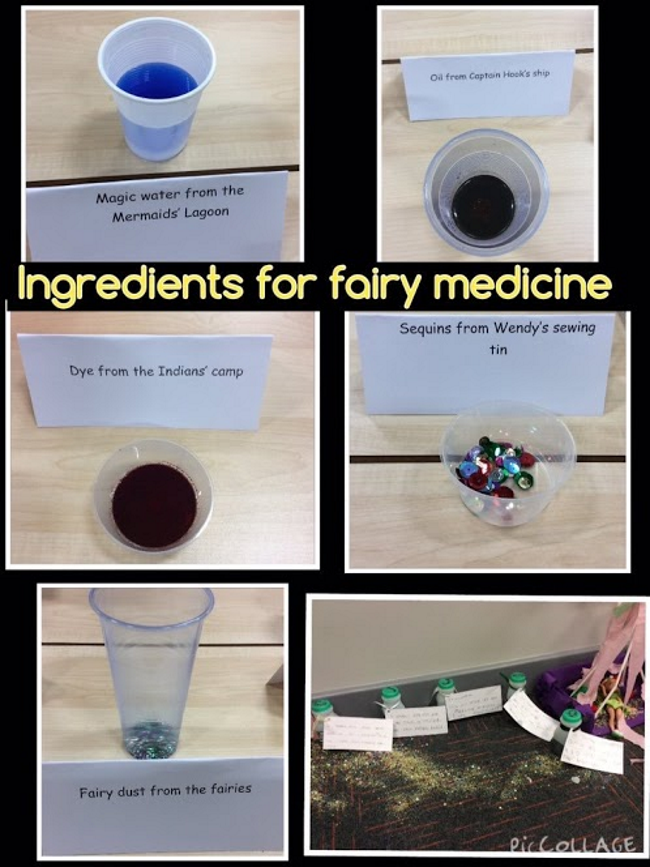 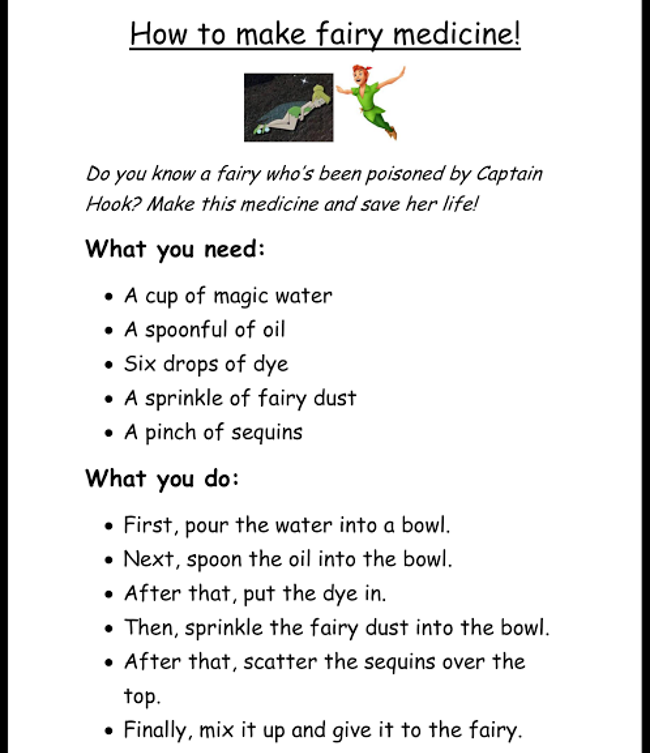 Children worked in groups to read and follow the instructions carefully. They bottled their medicine and left it for Tinkerbell, with a note instructing her on how to take it. 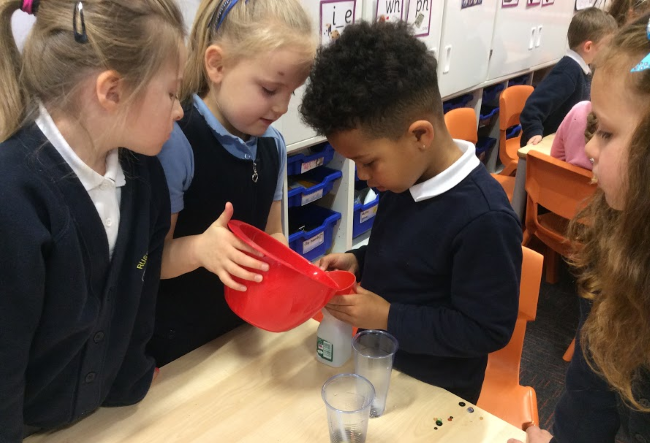 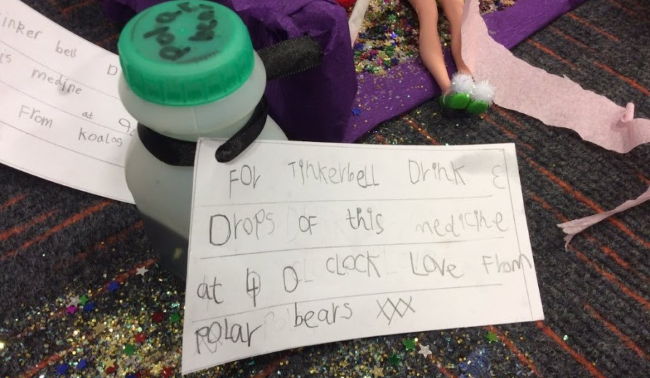 The following morning children were relieved to find that, thanks to their antidotes, Tinkerbell had made a full recovery! 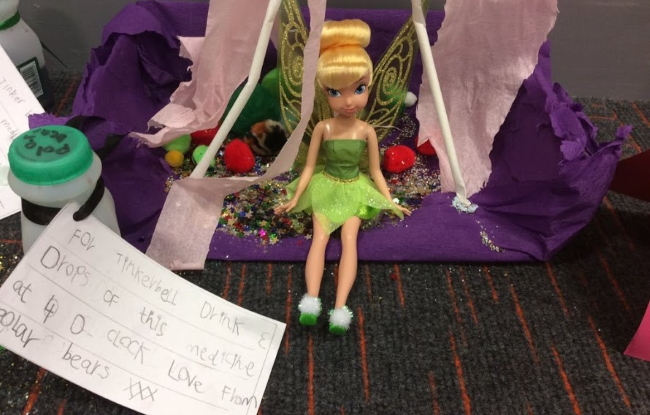 Their work was not yet finished, however, as they had to write a set of instructions to save the fairies of Neverland, who were being poisoned by the menacing Captain Hook. Examples of pupils’ written work can be found here. 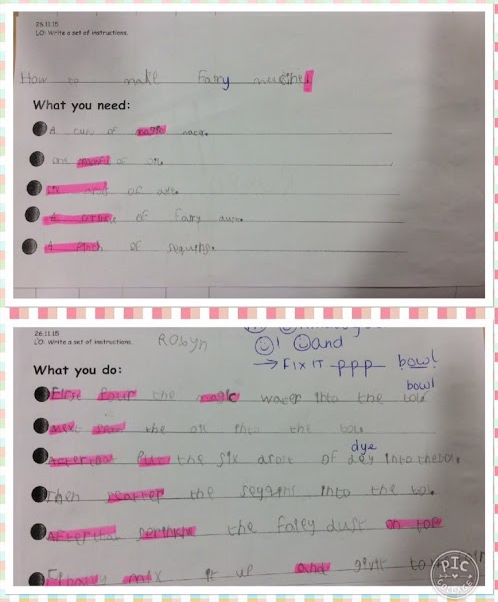 Meanwhile, pupils were enjoying a number of fairy-themed activities within the foundation subjects. Coinciding with Remembrance Day, pupils learnt about the famous Cottingley Fairies. We discussed how the young girls created the fake images and looked at some modern spoof images. Pupils then used the Explain Everything iPad app to create their own Cottingley Fairy-style photos in pairs. 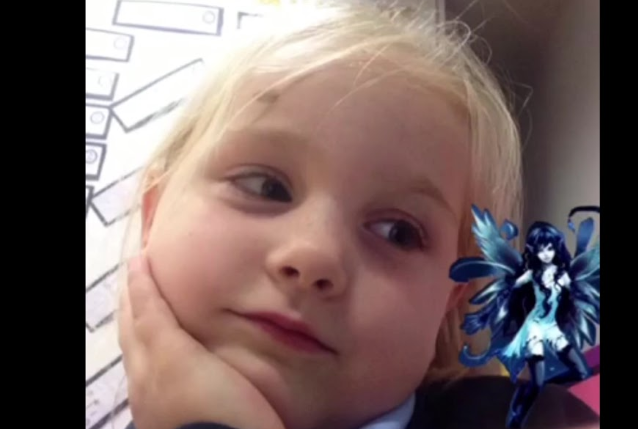 More examples of the pupils’ work can be found in this blog post. During art sessions, pupils made and painted these charming clay fairies! 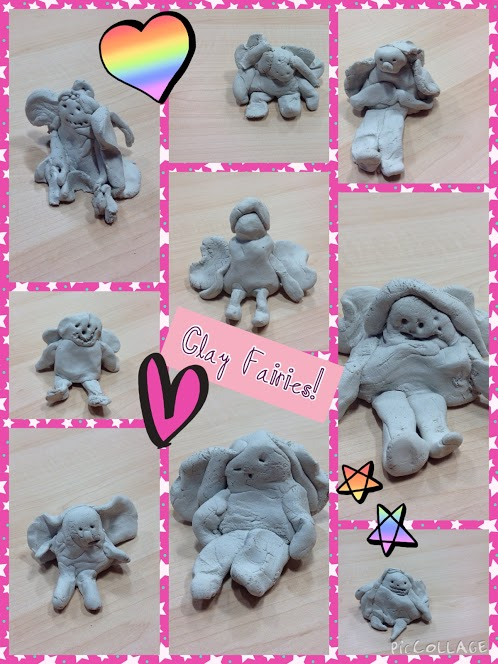 They made their clay fairies dance in short animations made with iMotion. Pupils had to follow a set of rules while creating their animations: 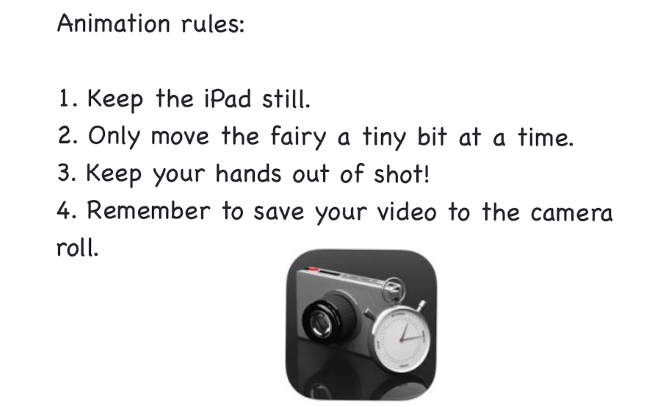 You can see examples of the animations on this following blog post. During Maths, pupils explored symmetry and created these lovely symmetrical fairy wings: 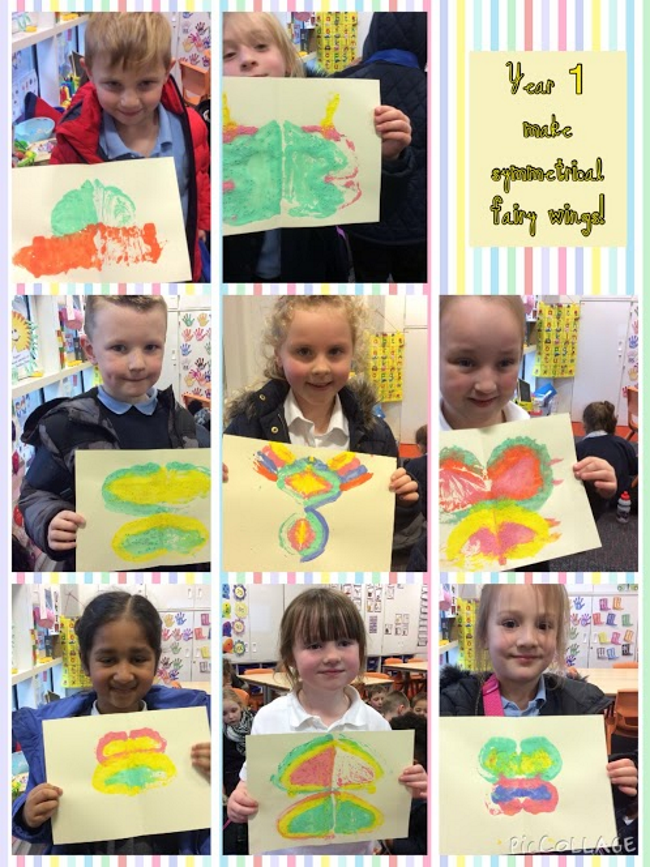 They also explored positional language, with help from a very cheeky Tinkerbell! You can listen to pupils using the language by visiting this blog post. 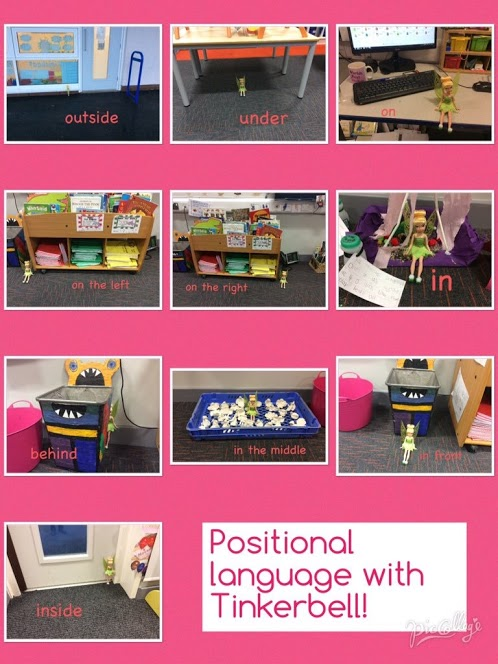 Pupils worked in groups to make these fool-proof fairy traps and were confident that the Tooth Fairy would be lured by a persuasive note, some sparkly fairy dust and a shiny, white tooth dangling invitingly from within the trap. 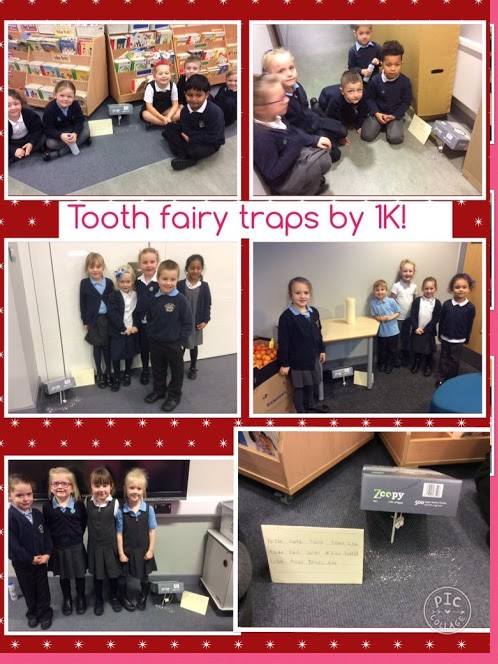 The next morning, pupils were thrilled to discover that their traps had worked! They found that each tooth had been replaced with a golden coin but were disappointed to find no sign of the Tooth Fairy herself. 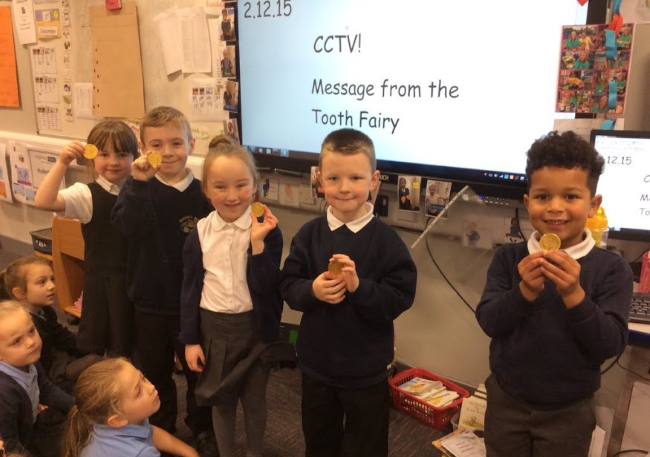 However, all was not lost as the school CCTV footage revealed that the traps had in fact succeeded in trapping the Tooth Fairy! 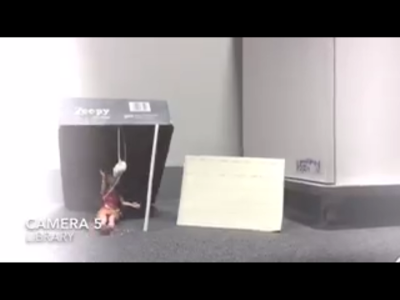 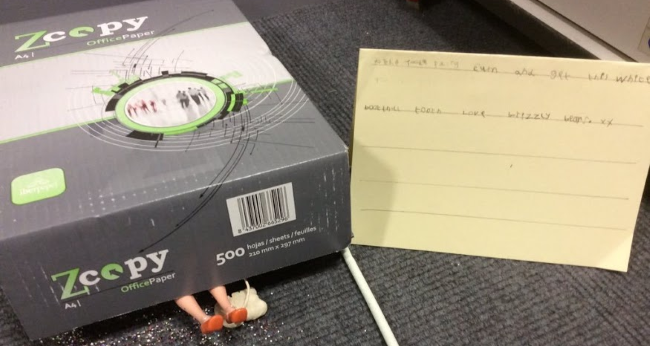 You can watch the CCTV footage and see our follow-up work here. After learning a WAGOLL (what a good one looks like) instructional text, pupils then wrote a set of instructions for trapping the tooth fairy. You can see my pupils performing the text and more examples of their work via the above link. 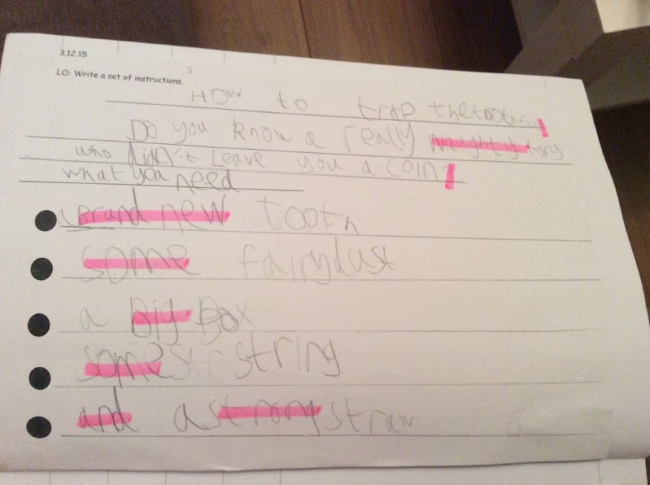 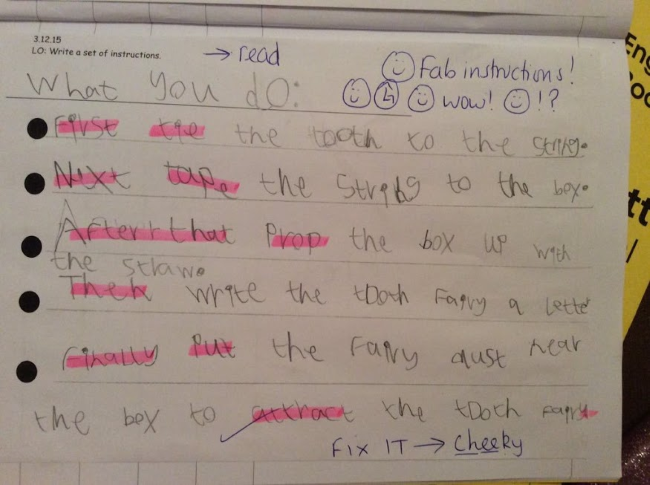 To celebrate the end of a busy term and to culminate our topic on fairies, pupils were treated to a ‘Fairy and Elf’ theme day. Pupils were invited to come to school dressed as fairies and elves, and enjoyed a variety of exciting Christmassy activities, such as a fairy dance, making an ‘elf-yourself’ and baking biscuits. You can find out more about the day by visiting this blog post. 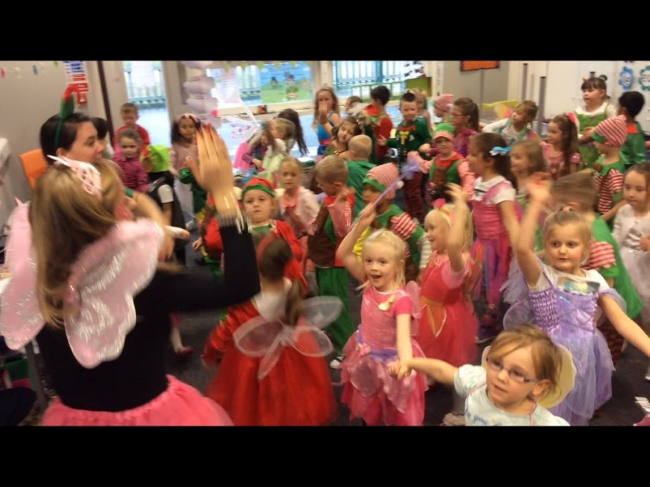 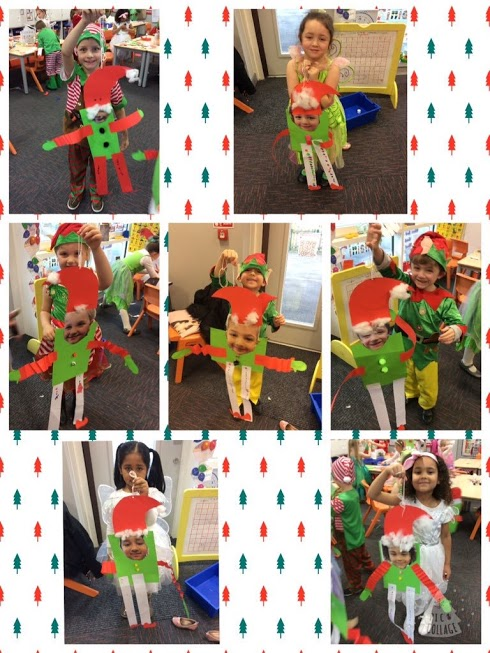 I hope this topic has inspired you to use technology creatively to engage and motivate your pupils. With a bit of imagination, an iPad and half a ton of glitter, I created some magical experiences for my Year One pupils!

Have you undertaken such a project? Share it below!