Richard Spencer has taught A Level biology in Teesside for 22 years and is currently Head of Science at Middlesbrough College. He has won numerous awards for science teaching, reflecting his dedication to students’ success, his passion for effective and engaging teaching and learning and his enthusiasm for sharing good practice with teachers locally, nationally and internationally. In 2010 he was appointed Member of the British Empire (MBE) in the New Year’s Honours List for services to science communication. In 2014 he was named as one of the UK’s Top 100 scientists in a list drawn up by the Science Council to celebrate its ten year anniversary in 2014. 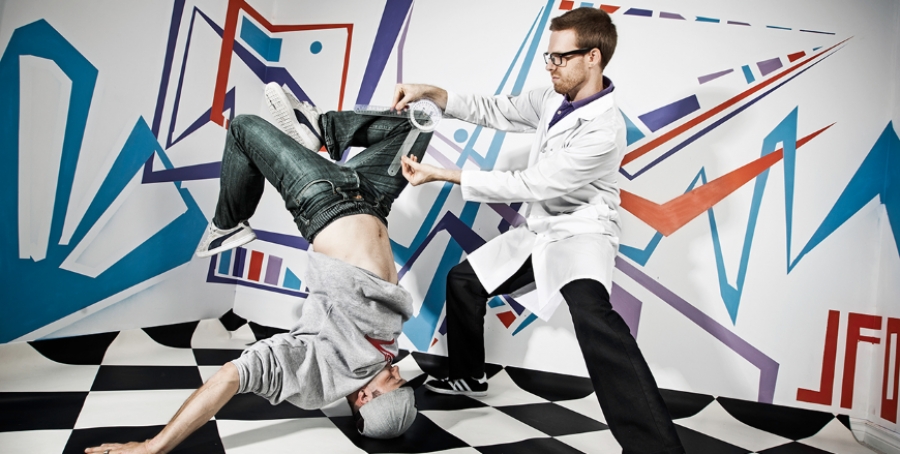 This article is about how simple dances can be used to improve student learning about complex cellular processes. The dances are easy to follow and bring complicated topics to life. They help students learn about processes and terminology which they might otherwise find difficult, dry or hard to remember. The dances afford a multisensory approach to learning; they are a fusion of art and science and a blend of fun and serious biology.

My first biology dance evolved after a lesson on mitosis. I’ll never forget the moment when - after experiencing the theory, a video, computer animations, root tip squash practical and simulation using pipe-cleaners – a student declared "I still don’t get it!” I started to explain the stages of mitosis using my hands and fingers to simulate the movement of the chromosomes during cell division and concluded “It’s a bit like a dance”.

As I walked home that evening, mulling over mitosis, my student's comments and the hand actions, I thought to myself "This is not just a bit like a dance - it is a dance!" Rummaging through my CD collection, I found a suitable piece of music to set the actions to and "The Mitosis Mamba" was created. Students enjoyed performing the actions and they found it much easier to visualise the stages of mitosis then they could have done without the Mamba. A question on the stages of mitosis came up in the summer exams, and students squirmed in their seats as they re-enacted the stages of cell division! Following the success of this activity, I’ve developed other dances: The Meiosis Square Dance; Meiosis in Minute; Nerve Dance Latino; The DNA Boogie; and Aerobics Respiration.

Audiences have joined in biology dances at presentations, conferences and venues from Sunderland in the north to Broadstairs in the south. In March 2011, as part of Science in Norwich Day, members of the public were taught the DNA Boogie and danced it in the street. The Mitosis Mamba has taken me to science festivals in France, Germany, Belgium and Denmark as part of Science on Stage, a European Festival of Science. This has generated further interest from teachers across Europe, with dance instructions translated into Swedish and Dutch. Last year I was nominated to appear on Ashley Banjo’s “Big Town Dance” Show on Sky 1 and chose to show Aerobics Respiration to Diversity as part of my audition! When I say ‘show’, I should really say ‘involve’ because the dances are all about audience participation. The dances haven’t gone ‘street’ yet, but I’m open to new ideas!

Someone once called Boogie Biology an example of ‘edutainment’. I don’t know if that was meant as a compliment or an insult; I do know that the dances are simple, fun and that they work!

“Blame it on the Boogie” (Jackson Five)

Do you go about using dance moves in the classroom? If so, tell us about it in the comments!