Ian Addison is a primary school teacher and ICT co-ordinator. From September 2010, he has been responsible for the ICT at St John the Baptist Primary School, Waltham Chase, Hampshire.

From 2008-2010, Ian was seconded to work with Hampshire LA training teachers on using the VLE, Studywiz.

He has been an ICT Mark Assessor since October 2008 which involves him supporting and assessing schools that have decided to use the Becta Self-Review Framework for ICT.

Website: ianaddison.net Email This email address is being protected from spambots. You need JavaScript enabled to view it. 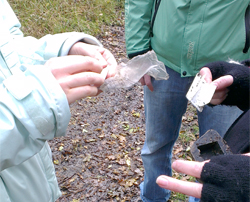 Today I went on my first geocaching experience. For those that don’t know, a geocache is a container that is hidden somewhere in the world. It has coordinates assigned to it and then using these coordinates (or an app) people go and look for the boxes. Inside the box could be a number of things, but usually there is a notepad to sign to show you found it.

Why did we do it? I’ll come back to this later.

We started with getting an app. I used the official geocaching.com app called Groundspeak. This is £6 which in app-world, makes it very expensive, but consider the fact that I was out and about using it for two hours today and it only cost me £6. Plus I get to use it over and over again. It is well worth it in my opinion.