SEN over the years

Carolyn Hughes studied Literature and Communications Studies at Liverpool John Moores University, and began teaching 20 years ago at a Primary School in Wirral. She moved to Meadowside Special School in 2001, as Subject Leader for Music. Carolyn became Strategic Leader for ICT across the school and a member of the Senior Leadership Team. Meadowside School caters for secondary-aged pupils with complex needs, ranging from PMLD to MLD, and the teachers use ICT to develop communication, independence, and also for fun! Carolyn is also a parent to four children, the youngest of whom has Down’s Syndrome and communication difficulties.

Website: www.meadowsideschool.com Email This email address is being protected from spambots. You need JavaScript enabled to view it.

When I began teaching in the early 1990s, schools were approaching the Millennium with great anticipation for a futuristic world of gadgets and technologies. The best we had at that time was a BBC B Computer, hooked up to a dot matrix printer with that awful neverending sheet of paper with the holes in the sides. In some classrooms they were seen as glorified typewriters so that kids could type up a good piece of writing. More adventurous uses included simple programming and filling the screen with scrolling text from a few lines of code.

"Apple were the first to introduce text-to-speech into an operating system."

Computers in the early days were never really seen as beneficial to children with SEN. Assistive technology was never a used phrase, although the use of text-to-speech software has developed enormously in the last 30 years. Apple were the first to introduce it into an operating system and it has become the norm for web pages and electronic devices to include such a feature. It is so much simpler now, breaking down barriers for those struggling to see or read. Speech recognition software did actually begin in the 1950s with Bell’s Audrey system that was able to recognise spoken digits. In terms of classroom applications, it is only recently that it has actually become more functional. If the physical act of writing is difficult, speech recognition software enables independent access to computers and a wide range of classroom tasks. Newer Apple iPads incorporate a microphone icon with the keyboard, for text to be spoken rather than typed.

In terms of access to resources, technology has brought the world to our fingertips. Gone are the days when, for example, a song had to be sourced, ordered etc. It is there, in an instant, ideal for supporting anxious children with ASD, for example, providing security through familiar songs, rhymes and characters. In the early days, I played music on cassette tapes, scrolling through songs while the play button was still pressed and listening for the gap to skip to the next ‘track’. Woe betide the tape got caught in the machinery and became unravelled; then would begin the tedious (yet satisfying) job of winding it manually back together again. The good thing about tapes was that children could record their own voices and play them back almost instantly, but with USB microphones and apps that store voice clips now, tapes are most definitely a thing of the past. Even a computer mouse is becoming obsolete, with touchscreens and trackpads being more responsive and easier to use.

As a Primary school teacher, we had concept keyboards and marvelled at the simplicity for early readers with limited literacy skills, to be able to input information into a computer. Simplicity is now on another level completely. Pupils can say certain phrases out loud and the computer will search for them without even clicking anything! The advent of technology such as ‘Siri’ and ‘OK Google’ mean that pupils with severe physical barriers to learning are not disadvantaged by being unable to type or click. Stephen Hawking is testament to how developments in speech synthesisers can overcome barriers to communication and independence. He has an infrared switch mounted on to his glasses and his cheek movements are picked up by the switch. He uses software called EZ Keys which works effectively through its ability to predict words contextually.

"As wireless technologies have advanced, SEN pupils have been freed from their shackles."

When I first entered the world of SEN, resources were quite clumsy. Huge clamps and mounts, cables and connectors meant that the young person was limited further by the paraphernalia required just to select something on screen or input some text. As wireless technologies have advanced, pupils have been freed from the shackles of wired switches and pointing devices, to be able to use even just eye movements. This used to be incredibly expensive but is now priced similar to that of a mid-range PC, making it accessible to most schools and many households.

The iPad software developers UMoove are making use of the built in camera as an input device, enabling game control from a turn of the head or eyes. They have marketed one as a health app (UHealth), seeing it is a mainstream fun activity for improving focus and attention. Poor focus and attention are central to many SEN difficulties so its application for the SEN market is significant. As free software, this can make a considerable contribution to breaking down barriers to access education and developing independence. Apple’s iOS 7 introduced head-controlled movements to the iPad market, enabling users with access issues to become more independent. There are some fun face-controlled apps available for free, enabling games to be played with movements such as a smile! It is marketed as ‘Face Yoga’, but its application for users unable to control games with traditional approaches is phenomenal.

There is even development of Apps controlled only by the mind, the user wears a headset and focuses on making it happen by the power of thought alone! Mindwave is available on Amazon for under £100.

There is a whole host of products out there, priced around the £100 mark that are groundbreaking and liberating for people with physical access difficulties. There’s Nod, a ring that allows control of a range of devices with just a flick of a thumb or a wave of a hand; Leapmotion brings the futuristic technology imagined in the movie Minority Report to an attainable reality. 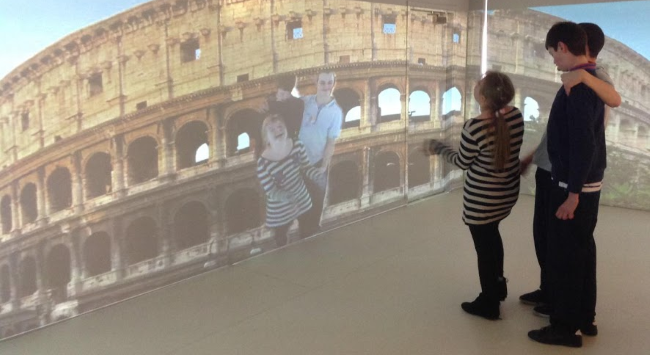 We recently invested a significant amount of money into an Immersive Room, allowing learners with profound and multiple learning disabilities (PMLD) to interact with an environment that is all around them, not just on one screen. Some of the more successful environments have been added for free using online video clips, home made clips and images. The room has the ‘wow factor’ and is beneficial because of its flexibility. Creative uses of Kinect technology and projectors allow users to interact with what they see, even seeing themselves actually IN some of the images. In terms of application for users with SEN, the room can be set up to meet varying levels of need in an instant.

It must be noted that while all these ideas are exciting novelties, in order to actually apply their use to education they need to be used innovatively for teaching and learning. There are a lot of very hi-tech devices and gadgets out there that cost huge amounts of money. The free or cheap innovations can be just as productive provided they are used with thought and purpose.

Do you work in SEN? Share your experiences below!