Teaching Shakespeare is a piece of cake

Special needs teacher Adele Devine co-founder of Early Shakespeare and is also the author of Literacy for Visual Learners and Colour Coding for Learners with Autism. She is also the managing director and co-founder of the award-winning SEN Assist. Adele has over a decade of experience teaching children on the autistic spectrum and worked as an ABA home tutor before qualifying as a teacher in 2004. She lives with her husband and three children in Surrey, UK.

Website: adeledevine.com Email This email address is being protected from spambots. You need JavaScript enabled to view it.

This April, why not throw a surprise 450th birthday party for Shakespeare, with decorations, cake, the lot? Create an afternoon that will stand out in their memories forever. Inspire them! What could they do with their lives? Shakespeare did not start out with pots of money. He used education, life experience and imagination to create stories we still relate to.

So you’ve got the decorations, the balloons and theme... You’ve even convinced a Mum on the PTA to make a huge Shakespeare cake. Next provide placemats of showing Shakespeare’s family tree. Let the students lead their own discussion about the Bard’s life over lunch. When did he get married? How many children did he have? What made his life so party worthy? Send the placemats home (free to print) so the discussion continues...

Stand up for Shakespeare

In 2008 the Royal Shakespeare Company (RSC) launched their ‘Stand up for Shakespeare’ campaign. The RSC suggest children learn about Shakespeare by:

“Shakespeare wrote plays and young children are geniuses at playing. Ask them to comment on a great work of literature and they will shrink away. Give a child the part of Bottom, Tybalt, Lady Macbeth or Viola and watch them unlock their imagination, self esteem and a treasure trove of insight into what it's like to be alive that will feed them for a lifetime. Shakespeare remains the world's favourite artist because his living dilemmas of love, mortality, power and citizenship remain unresolved, vivid and urgent today”.

Keep that pile of plays in the resource cupboard until you have your students so enthused that they will cheer when you produce them. Shakespeare did not set out to write set texts. His intention was to engage an audience - to entertain. 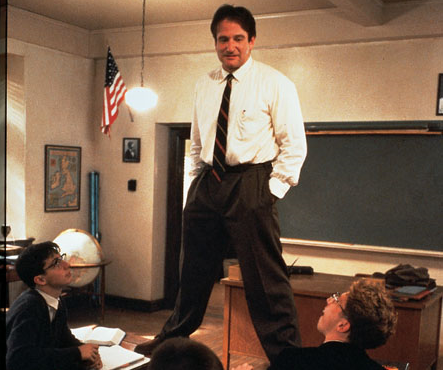 “Why do I stand up here? I stand upon my desk to remind myself that we must constantly look at things in a different way. You see the world looks very different up here … Just when you think you know something, you have to look at it in another way. Even though it may seem silly or wrong, you must try.” – Robin Williams, Dead Poets Society (1989)

Theatre in the Classroom

Spark imaginations with some witchy props – a cauldron, pointy hats, long black cloaks. Set the scene by changing the lighting. Lights out - Prime opportunity to talk about not having electricity and writing by candle light with quill and ink. Get them making spells – adding whatever they like. Use some of the language, but not by reading text.

Get them acting mad. What does madness look like? Have a mad competition where they get in pairs talk about it then act out ‘madness’. Make them laugh so loud the head teacher pops their head through the door to check what’s going on.

Create the balcony scene with a ladder: “O Romeo, Romeo! Wherefore art thou Romeo?” What age was Juliet? How old are people when they marry now? What if parents could still choose them a husband or wife? Look at some pictures of people parents might choose. Make them laugh and get them relating Shakespeare’s stories to their own lives.

Bring in some foam swords and get them fencing. Have teams of Capulets and Montagues. Talk about the types of things that make young people fight. What can affect their moods at school – heat, hunger, home life? What makes them angry? Who are their friends? Act out Tybalt killing Mercutio, and then Romeo killing Tybalt. Have a court scene. Talk about justice. Talk about how people react quickly in the heat of the moment. Link this with relevant events – television, pop groups. Anything that gets them talking. 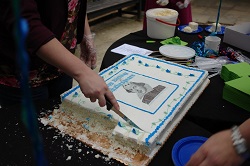 Get the boys being fairies. Then see if the girls can do any better. Join in. Make it silly. Get them laughing. Use this prime time to introduce the idea that in Shakespeare’s day all the actors were men and that the girls parts were usually played by boys.

Show them how Shakespeare sent himself up in the play scene from A Midsummer Night’s Dream (Act V sc i) with Bottom’s exaggerated and ridiculous use of “O”.

Act out the funny play with a big sweeping moves on every Oooooooh! Then be still for the line. Try it with different children being “Wall” and “Bottom”.

Get them up acting out the play with masks as the cartoon actors showing them what to do step by step. Or get them to create their own box theatres, scenery and all and become directors of their own plays. Shakespeare for Schools offers an inclusive approach. They provide students with the experience of performing shortened versions of the plays in real theatres. These are open to all schools. Usually they will have three or four schools including a Primary, Secondary and special educational needs (SEN) schools, and they also offer CPD to teachers and ongoing support.

The Shakespeare’s Birthplace have partnered with numerous organisations to create an all new celebration – ‘Shakespeare Week’ kicks off on 17th March 2014. Over 2000 schools have already signed up. Each child involved will get a free passport to Shakespeare full of offers and opportunities.

When introducing Shakespeare, leave that pile of dusty old books in the cupboard. Arrange a fencing lesson, visit a theatre… surprise them by breathing life into those words. Giving children the right introduction to Shakespeare means they will be less afraid of meeting other classic authors. Learning to love language will also improve their ability to express themselves scaffolding future success.