Steve Bowkett is an author and education consultant. He has written fiction for children of all ages and educational books on literacy, creativity, thinking skills and emotional resourcefulness. His sixtieth book – 100 Ideas for Primary Teachers: Thinking Skills – is being published in spring 2014.

Website: www.stevebowkett.co.uk Email This email address is being protected from spambots. You need JavaScript enabled to view it. 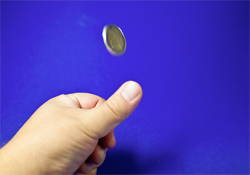 If you find that your children are struggling to have ideas when planning a story, try this simple and very effective technique. Show them a picture or a sentence and play the coin flip game. Invite the children to ask yes-no questions about the picture or sentence stimulus. Emphasise that the questions have to be sensible and relevant. After each question, flip a coin – heads means yes and tails means no.

A further benefit of the game is that it takes away the fear of a wrong answer. Both a yes and a no outcome contribute something to the evolving story. The game also means that children can work collaboratively; in groups or as a whole class. Every child can make a contribution. When running the activity tell the children that they don’t need to write out the questions. A no answer usually means that they don’t have to write anything (i.e. there’s no need to record ‘non-information’). This tends to attract the more reluctant writers. Yes answers can be written down in note form. This helps to break the habit that some children have of trying to write the story during the planning stage. Tell groups that once a question has been asked the coin must be passed on to the next child; this stops someone dominating the group. If a child doesn’t have a question when the coin comes round, tell him that’s fine but he must take the coin and pass it on. This gives that child equal value and status in the group even if he has no question at that time.

Develop the activity in these ways:

Ask children to come up with open questions initially and then turn them into closed questions. So using the stimulus sentence ‘They shook hands but only Baxter was smiling’, a child might ask ‘What does Baxter look like?’ but to flip the coin must turn that into a heads-or-tails question such as ‘Is Baxter a man?’ Encouraging such ‘toggling’ between open and closed questions helps to develop the habit of active questioning coupled with the skill of asking incisive questions.

After a child or group has gathered around fifteen pieces of information, ask them to review it. Say ‘Is there anything you would change for a good reason that would improve your story?’ Then allow them to make those changes. Allow some discussion time afterwards where children can explain their reasoning. Another ploy when playing the game is to flip the coin after asking the first question, then tell the child to decide for himself what the answer will be to the second question. Thus a new pattern is established – flip / decide / flip / decide. Eventually children feel more comfortable simply making up their own minds what the most useful or appropriate answer should be.

Sometimes a child will play the game for a few minutes then come and tell you that he knows what his story is now without needing to do more coin flips. In that case let the child go and write!

Finally, suggest that if children get stuck while writing, playing the game for a few minutes usually gets them writing again.