Whatever education setting you work in, the word “marking” will have a different meaning for you. For a lot of people reading this article, “marking” is the albatross of their teaching career; the one thing which can really impact upon a person’s well-being and, no matter how much we might loathe it, a fundamental part of our jobs.

Marking is also something which needs to be done with great care and attention so that any feedback given to learners ultimately helps them to move forward. This means that middle and senior leaders have a huge role to play in ensuring staff are marking correctly,"The feedback can be quickly written into the learner’s book." but efficiently so that no one’s workload is unrealistic. This is a tough balancing act for middle and senior leaders, and as such this article is going to explore some of the different ways in which marking can be lessened for staff without compromising the quality of feedback given.

Live marking is a simple but effective technique which involves the marking of books during a lesson / series of lessons with a particular class. This doesn’t mean you simply take all the pupils’ books and tick and flick them: it means sitting down with learners and discussing their work in detail with them. Once the discussion has taken place, the feedback can be quickly written into the learner’s book, and they can then act on the feedback straight away. This is an invaluable method for us as educators as it allows us to cut down on what we’re doing outside of the classroom, while also differentiating what support we’re giving in the room via the feedback given to the learner.

A criticism of this technique could be the fact that not all books are marked at the same time. However, this is a big misconception: for marking to be effective it doesn’t have to be given to all members of a class at the same time. This means that educators can split their marking up into different groups per class. When learners are split up into these groups you can devise a system as to how and when you are going to mark each group’s set of books. For example, if you see a class three times a fortnight, prior to one of these lessons you could mark a third of the books, another third in the lesson and another third before the lesson after that one. This can have high impact for you as an educator, as the books you mark during the lesson could be differentiated both up and down so that the learners who need additional support can be given it. 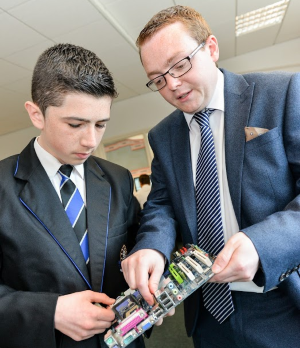 When marking pupils’ work it is important that work is marked in the correct way. This means that comments need to be written in a format which is personalised to the learner and helps them to improve in a fully independent manner. For example, when writing a piece of feedback in the commonly used format of WWW and EBI, the WWW should be specific to the piece of work which is being marked. However, the EBI should be written as a follow-on question from that WWW so that pupils can given be a task which helps them to improve. By adopting a process such as this, it helps to reduce workload as pupils can’t just rely on you the educator telling them what they need to do in order to improve. They have to identify it for themselves, hence making them become independent learners.

Group work is another area where misconceptions with marking tend to take place, and this is where the task can be significantly shortened without compromising the learning process. This is because, although feedback is important for all learners, it is important it is given at specific stages as opposed to be given all the time. This means that marking can be given per group during a project as the whole point of group work is to get pupils to work as a team. Therefore, in order to do this effectively, it doesn’t require all members of that team to receive specific feedback about their work they in fact need to receive it as a collective, so they can decide as a group how they intend to move forward with their work.

Peer marking is another way in which teacher workload can be cut down quite significantly. However, this method can and should be different from just swapping books with the other learners in the room. It can actually take place outside of the normal classroom environment. This process is really powerful as you can get different classes to provide each other with feedback, either directly or indirectly. Peer marking can then be used as a way to move forward if pupils use their marking criteria as a way to critique their own work.

The techniques outlined in this article are just a few of the different ways in which I truly believe marking can be lessened without the quality of feedback being affected. It is important that middle and senior leaders in a school environment consider the implications of marking and come up with systems which are fair, effective and realistic for both pupils and staff. We need to recognise that if a member of staff is going home and marking for three or four hours or more, their books may appear wonderful but their teaching and learning will eventually suffer as the number of hours they’re putting into their work will become unsustainable. I used to be one of these teachers. However, due to the implementation of some of the methods I’ve outlined in this article, this is no longer the case and I am much better for it.

What methods do you use for marking? Let us know below.