What educators can learn from BMX riders and gamers

After 5 years of higher education graduating with a BA Hons from RHUL and an MA from Durham University, Chris has somehow retained an indubitable passion for education.

Now, the lead blog editor for LearnersCloud, a unique e-learning GCSE resource provider, Chris’s passion for innovative technologies has flourished and with it, a desire to share his own insights, reviews and experiences on integrating effective technologies within the classroom.

Website: www.LearnersCloud.com Email This email address is being protected from spambots. You need JavaScript enabled to view it. 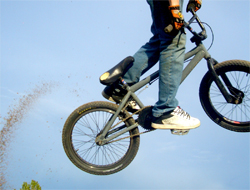 One of the most important things for young people growing up today is the appeal of embracing change. The catch for educators in preparing students for the 21st-century workforce is how to get them to question and challenge our current understanding and practices.

In the past, what we’ve commonly referred to as the gaming disposition provides insight into this. If you consider the gaming industry − the hardcore gamers, those that play MMOGs (massively multiplayer online games) such as Final Fantasy and World of Warcraft, the surprising characteristic is that these individuals are almost exclusively bottom-line oriented. They want to be measured; they want to know how their abilities rate against others.

In fact, this is part of the hook: gamers want to learn, albeit not in a conscious way but by developing their skills – reaching the next level, completing higher-order tasks or gaining superior powers and attack combinations. They are not just embracing change, but thriving off the prospect.

Once rewarded, this desire and willingness to change is reinforcing their behaviour and motivating them to push on to higher levels of performance or more advanced levels in the games.

Building on the gaming disposition...

I recently moved to a house on the outer reaches of London, in Hertfordshire. I’m not going to claim to be an extreme sportsman (although that would sound cool), but I am fascinated by the dedication involved in stunt riding and skateboarding. Near the new house, my nephew, an amateur in the world of BMX stunt riding, invited me down to his local skate park, which had just been refitted with new rails, a half-pipe and what he referred to as ‘loads of extreme’ jumps. While there, I began to notice a consistent behaviour pattern demonstrated by all of the kids in my nephew’s group. At the end of each jump or ‘run’, whether the rider landed the jump or failed, each of the observing riders would park up next to them and talk through what worked, what didn’t, what’s the best approach and what they could add on their next run to improve the intensity. This was never prompted nor requested, in the same way gamers would form player guilds and alliances during in-play and talk through battle strategies over headsets or in-game messengers.

Each rider would become a learner and a teacher − although none had had professional training − developing their knowledge and skills over time. Once we got back home, I asked my nephew where they had learnt each trick and he simply explained that they would all watch endless clips on YouTube, and every time they met up they would each bring something new to advance the jumps and tricks they’d already perfected.

It was obvious they loved every part of the experience, from the adrenaline-fuelled jumps to the delicate rail grinds and wheel balances. Oblivious to the risk and the amount of time needed to get to a higher standard, they all offered their complete dedication.

The answer is the same thing that motivates hardcore gamers, the same thing that motivates musicians, theatre performers and athletes for that matter – their passion and desire to compete, to better themselves and to better their profile compared to their rivals and peers. In their own field and context, each individual demonstrates significant focus, determination and motivation to develop and improve, all of which is achieved through the process of learning, whether they actually realise it or not.

What can we take from this as educators?

In each example − where a communal group connects through a shared interest and passion − learning takes place, whether consciously or not. Within this group setting each individual inputs, comments, feeds back and recommends – all of which marinades and throws out teachings that are absorbed and built upon.

These behaviours are what accelerate our ability to learn and evolve, something that is as important for young people today as it has ever been, given the speed and rate of change that we’re now seeing. Skills must be dynamic, enhancing and adapting to cope with education systems and employers’ and society’s demands changing over time.

The challenge for educators is how to create a context for individuals to harness their skills and support their learning once a student has identified a career path or passion that they want to pursue.

While this is subjective, from my experience observing my nephew and his friends as well as researching the behaviour of online gamers, the concept of play is one of the most significant learning anchors. Play in a literal sense has been in and out of the media and education agendas for the past ten years. However, I’m not limiting play to the physical act of engaging, I’m referring to play in the sense of tinkering: taking an idea, playing around with it, making it personal, forming a sense of ownership and investing time into developing that idea.

From writing the first paragraph of a new blog article and changing the opening sentence, tweaking wording, starting with a question or possibly a surprising fact, to testing how two chemicals react together and varying their concentration levels or exposure time. In this way, tinkering can involve experimenting, trialling or testing different components. It is this exposure to failure or success where advanced learning takes place. It is only when we become frightened or intimidated at the prospect of failing that the process of change can no longer take place.

Making mistakes is acceptable, even vital, as they lead us to ask why, and focusing our attention, we become dedicated to finding a solution. We start to question variables, we find ourselves motivated to finding a solution or improving our performance. We tinker, we take on board ideas shared by our communal group, we tinker again, we question (e.g. watch YouTube clips of role models) and we continue to tinker until the original idea evolves into something improved, and more advanced.

Whether tinkering is logical or not, as we absorb ourselves in finding a solution, we gain focus, determination and oftentimes an almost intuitive feel for what needs to be adapted for the idea to be progressed.

This, for me, is how we as educators need to guide our students into establishing their passions and to follow their desired career paths.