Why the world must unite for education [interview]

Myassar Itani is a Primary school teacher from Lebanon. She has been teaching English as a foreign language at Mohammad Shamel Public School since 2007. Itani is an ISA ambassador for the British Council in her country, and a part of a global network of teachers that participate in Connecting Classrooms.

Stewart Cook is a Year 5 teacher and SENCo at Frances Olive Anderson Primary School in Lincolnshire, England. He is also a British Council ambassador, promoting the work of the British Council throughout the UK.

How best to build pedagogic bridges across the world? We recently had a lively Skype conversation with Stewart Cook (Frances Olive Anderson Primary School in Lincolnshire) and Myassar Al Itani (Mohammad Shamel State School in Beirut) on their award-winning, transglobal partnership. The two educators were meeting at a Connecting Classrooms event in Amman, Jordan, and were keen to tell us about the power of such a collaboration….

First of all, how did this partnership get started?

Stewart: It got started in 2012, so it's been going for a while now. For us here at Frances Olive Anderson Primary School, we're from a very rural, monocultural area, and we were very keen to give our children experiences of other cultures. So we contacted the British Council to ask them for some ideas and, as it happened, Lebanon was one of their priority countries. They then put us in contact with a partner school in Beirut.

Myassar: We were able to connect with a school before, but unfortunately they were closed by Ofsted. We liked the idea of communicating with a school outside Lebanon, and found Stewart's school – they were very willing to share their experiences with us by starting a partnership.

Exciting times! What have been some of the most exciting activities that pupils and teachers have been taking part in?

Stewart: The refugee project was good.

Myassar: Yes, because it helped both schools and students to develop their learning on an emotional level.

Stewart: Myassar has around 250 Syrian refugees in her school. Our children had heard lots on the news about refugees, not all accurate, and wanted to break up the stereotypes surrounding the situation. It was really all about helping pupils to understand that the Syrian children were basically just the same as them. It's about giving them that insight and experience that they wouldn't otherwise get. Trying to help them realise that something is happening in the world but these people aren't necessarily the same as how the media is painting them. It's about giving pupils access to a good project.

Myassar: Whereas the students in my class, they love that someone was willing to listen to them! Many refugees feel as if they are sometimes receiving minimal help, with the world in general just carrying on. It was nice for these children to talk with others their age and share their experiences.

Stewart: A good phrase that the British Council used was that it opened up an 'emotional hotline'. We concentrated on the rights of children, what rights they think they should have, with a lot of learning based around citizenship and PSHE. It's helped to make the curriculum much broader in our school - not something that's just bolted onto our existing curriculum, but instead it's something that underpins everything we do in our school, adding depth organically.

Myassar: It's the same for us here in Beirut also. With all of these activities, it's easier for the teachers to work on something that's fully part of the curriculum, as opposed to it being extracurricular.

It was a delight to see proud pupils from Mohammed Shamel State School holding up a banner with “PEACE” emblazoned on it.

Stewart: That's a project we ran called 'Peace In Our Hands', where we looked at messages and symbols of peace, and we exchanged banners at the event.

Myassar: Yes, you can find that project on Twitter through the hashtag #coreskillsvisit!

You talked about embedding emotional learning activities into the curriculum. How have you gone about making this such an integral part of teaching and learning?

Stewart: Well, we've concentrated on this being a values-led curriculum. Each term, we'll concentrate on a different value, and we try to ensure that projects mirror whatever value it is we're working on during that particular term. So, one of our values is 'Peace', which meant looking at the idea of peace and friendship, and the barriers to achieving them, with our partner school.

Myassar: We try to have a timeline planned out in advance, looking at when we'll begin each project, how long it will take, ensuring that each project runs smoothly, and so on.

How does this affect teacher workload in your schools?

Stewart: I think that, because the projects are so embedded into the curriculum, all teachers are on-board. That's the main thing. It's not adding to their workload, because...

Myassar: And once you start, you can't stop!

Given that the passion is so clearly there, how would you recommend schools develop a more global perspective, particularly with regards to refugee crises? How can we help schools understand more about the people wrapped up in these situations?

Stewart: I think that because we're both ambassadors for the British Council, one of our roles is to encourage more schools to become involved. Within Lincolnshire alone, we've got five or six different partnerships with Lebanese schools, and it's been great working hard on setting those partnerships up. Last year we came out to Jordan and brought three Lincolnshire teachers with us, and that's why we're both here in Amman today. In the next room, a team of British teachers are getting set up with peers based in the Middle East, beginning their own school partnerships.

Myassar: Yes, it's all about the sharing of experiences. It definitely helps that schools can see how successful these partnerships are they can see for themselves what can be achieved. We've built a reputation which shows what can be done, how smooth the work can be. With such a successful partnership going on for six years now, we're able to give many great examples.

Stewart: Getting in touch with the British Council is the best first step. They helped us a lot when we were first starting, and the Schools Online website is just full of resources and project plans.

Myassar: Actually, right now I’m teaching Syrian teachers as part of a British Council programme called Pathways. We look at the best ways to pronounce words, different phrases, integrating grammar and vocabulary… Something else that is helping the students at my school in their English is World Voice. It is one of the British Council's Programmes that teaches languages through songs. It is very helpful in learning English and the correct way to pronounce words.

Stewart: It’s also worth mentioning Chatterbox, another thing that the British Council are encouraging UK schools to try out. Chatterbox employ refugees in the UK to teach people Arabic, and they British Council are offering free one-hour sessions to schools in the UK! They’re a fantastic organisation, and this helps refugees find work. We’ve been teaching some Arabic here at the school - general phrases, greetings, what have you. Pupils find it difficult, but it’s been good.

Myassar: Our next activity will be looking at Arabic words and terms related to the idea of peace.

Great video conference with partner school in Lebanon looking at peace, thank you to @itani_myassar’s student for teaching us the Arabic words @Schools_On_Line @yorkshirejohn pic.twitter.com/p7VD4votZH

The Frances Olive Anderson Primary School motto is 'Being Different, Belonging Together'. How does the partnership honour this sentiment?

Stewart: I think that contrast has made it such a good partnership. Gainsborough has a population of around 18,000, whereas Beirut has well over a million. Gainsborough is very white and Christian, whereas in Mohammed Shamel State School alone you've got 441 Lebanese, 280 Syrian, 56 Palestinian... All of these nationalities and religions working together.

Myassar: These differences are actually causing pupils to be more curious. Children want to know about how the lives of their peers across the world differ from their own.

Stewart: Whenever we run a Facetime or Skype session, conversations always go off on tangents after the main discussion. Children are always intrigued to ask about each other, what they've been up to, what they're doing in the holidays. What everyone's realised is that the children are children, no matter what country they're in.

Myassar: Yeah, we're the same. I remember that, when asked about the key differences, one of my students said that the pupils from Gainsborough speak “English English”, so that's the version of the English language that they're learning! 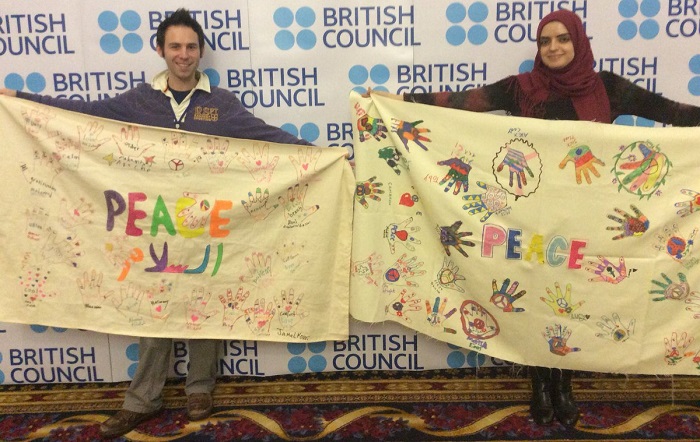 Myassar and Stewart exchange their latest project work on peace during a #CoreSkillsVisit in Jordan.

All of this must have a really positive impact on teacher wellbeing.

Stewart: Yeah, definitely. I think that makes the day-to-day a little more exciting - I know you shouldn't say that! - and it makes the curriculum a little more 'real life', based on real life experiences. We're sharing work all the time with our partner school, and knowing that we're sending something to Beirut means that everyone has to do their best. It really motivates everyone.

Myassar: The best part is that when children hold letters - snail mail - from across the world, there's a real sense of excitement. That connection is awesome.

Tell us more about technology that you use to make the most of this partnership.

Stewart: We're both very much into our ICT, so that's a big aspect of the partnership. We need to open up as many paths of communication as possible. It's not always easy to connect – the internet's very slow in Beirut!

Myassar: We always have plans all the way from A to Z.

Stewart: Exactly, so we start with one and we keep moving on to the next one as necessary. We’re in constant contact on Whatsapp, we set up Facebook pages to connect and share our work. The good thing about this is that we can share the project with our respective communities as well, which makes them want to get involved too. Twitter has been great for this as well.

Myassar: Padlet and WeTransfer, too. Zoom for video conferencing… Skype and FaceTime have of course been a huge help. Even YouTube!

Stewart: Absolutely - we just have loads of go-to resources. It’s about using whatever technology gets the job done.

With regards to the future of the partnership, what do you hope to achieve?

Stewart: I think mainly it’ll be just carrying on what we’ve been doing so far. Our next activity is going to be looking at pupil aspirations for the future.

Stewart: Exactly. Children in Beirut are introduced to English at a really young age, so their grasp on the language is fantastic. We hope to introduce a bit of that to our Arabic learning at Frances Olive Anderson Primary.

Myassar: And it’s still a great opportunity for the Lebanese kids to practice their English. They really look forward to it!