Engaging learners of all levels through entertainment

Dekko Comics is an educational comic company who take lessons from the current curriculum and turn them into engaging and informative comic stories. With three issues available, as well as a range of workshops and posters, Dekko hopes to change the way we view learning and show that learning is never boring but how it is presented can be.

Website: www.dekkocomics.com Email This email address is being protected from spambots. You need JavaScript enabled to view it.

Dekko Comics is an organisation who combine entertainment and education through comic stories, thus helping those who feel intimidated by the current systems and left disinterested in the learning process. With a roster of vibrant and engaging characters, Dekko Comics have proven popular, with both children and adults finding them a great way to engage with the lessons being taught.

For many pupils, school is the start of being misunderstood and made to feel stupid. This is particularly true for the many people in the UK with learning disabilities, one of whom is Dekko Comics creator Rossie Stone. Diagnosed with dyslexia at the start of Secondary school, Rossie struggled with lessons that only presented information in one way. Every attempt to try and follow the lessons only left him frustrated and stressed, while his classmates had no problems at all.

While studying for his final exams he made the active decision to enjoy himself, and so turned his study notes into a comic. As he read the comic he found that not only was he having fun, but he was actually retaining the information that he was reading.

His personal discovery is one that has been supported by research. In Sheffield Hallam University, Dr Paul Aleixo was the lead 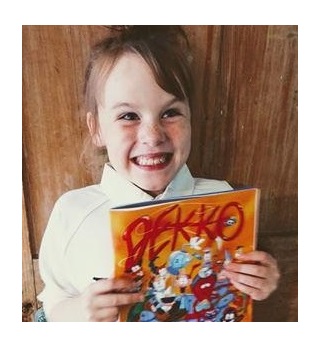 researcher whose study was to see which way students best engaged with the material in the lessons. The project presented the information in three ways – comic book pages, text-only and text alongside images. Participants were then asked to undertake a test which would check how much they had remembered. These tests showed that there were significantly high memory scores in the comic condition compared with both the text only and partial comic options.

Dr Aleixo was in no doubt about what these results meant, stating: “The findings of our research has provided evidence to support the idea of using comic books to create instructional materials such as textbooks.”

That is exactly what Dekko Comics have been doing with their first three issues, and the results have been overwhelmingly positive.

As one mother put it: “What made my day was I had to ask my daughter to STOP reading Issue 3 on the way home or she would be sick in the car, but she said ‘I find reading this comic like being in a ditch - easy to get in, but so difficult to get out of.’”

Dekko Comics have proven particularly useful for students with dyslexia, autism and more. This is due to their focus on visual learning, the easier-to-read exaggerated facial expressions, and the colour-coded teaching style.

If more students viewed learning as something easy to get into but difficult to stop, then maybe less people would be feeling let down by a system that is so crucial and yet refuses to change.