Rebecca is a teacher at a Primary school in north Melbourne, Australia, and enjoys sharing her ideas of embedding technology in the classroom with other teachers. She is also completing a Masters in Education, specialising in IT.

Are too many wall charts and posters undermining our focus on digital learning?

In order to be consistent with digital learning, teacher and technology enthusiast Rebecca Spink argues that keeping traditional forms of visual displays such as posters is contradictory. For those concerned with storing charts on a computer for no one to see, however, the solution may lie in 'Google Sites', an online collaborative platform with more to it than meets the eye. 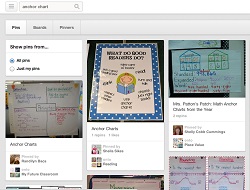 It has become quite a running joke with my year 5/6 students that I am obsessed with posters, or 'anchor charts', in our classroom.

For months I have continued to brush off their comments, believing what I have always been told: that students need these visual displays that have 'captured their learning'; that I was creating a 'print rich' classroom environment that gives my students (and visitors) a clear image of our classroom culture and what we are currently learning about.

I had often been told by casual replacement teachers that they were appreciative of the many charts as they found it easy to pick up and teach if I was absent. I was commended by other staff, with many often coming in to take pictures for their own ideas.