From library to LIBRATORY

Todd Burleson is a library media specialist at Hubbard Woods Elementary School in Winnetka, Illinois.  He is passionate about creating flexible learning environments that encourage kids to explore, learn and make.  In his free time he enjoys reading, photography and woodworking.

Website: azenlibrarian.blogspot.com Email This email address is being protected from spambots. You need JavaScript enabled to view it.

The transformation of our library to a libratory began well before I accepted the position as Resource Center director six years ago. I had been fortunate enough to have taught in the building for 14 years prior taking on the position. I watched how my students interacted with technology and books in the space. I saw overstuffed and inflexible bookcases, cluttered horizontal surfaces and a space that was visually disorganised. The whole space seemed askew - I have always been good with the ‘flow’ of spaces.

My classroom was sought out as an example by administrators and colleagues as a ‘smart’ space that responded to student needs. This seemed to come naturally for me, but then I realised I was always observing how people interacted with their environment. 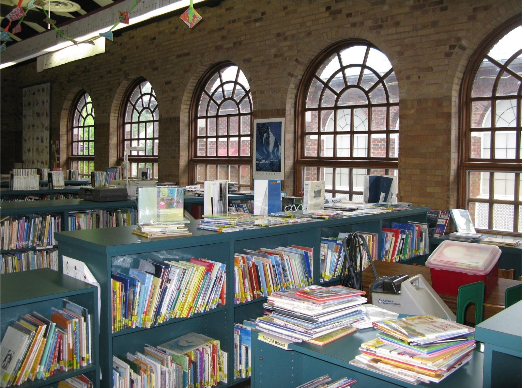 When I started that very first day of summer, I began by literally busting the bookcases from their bases with a 20 pound sledgehammer. After 25 years, new carpet was going to be installed later that summer. I knew that if the bookcases remained bolted to the floor there would be no chance of me liberating them for another quarter century. I’ll never forget the look on the former RC director’s face when he came in to return a few items on that first day of summer. I looked up from smashing some of the bases in the fiction section. He had a look of absolute terror. “I’m making them so that they can move. I’m putting them all on casters,” I said after wiping my brow. With that, I continued to noisily detach the bookcases from the floor. Later, I cut the the shelves into smaller sections. I then built new tops and bottoms, installed new end caps and put everything on industrial casters. 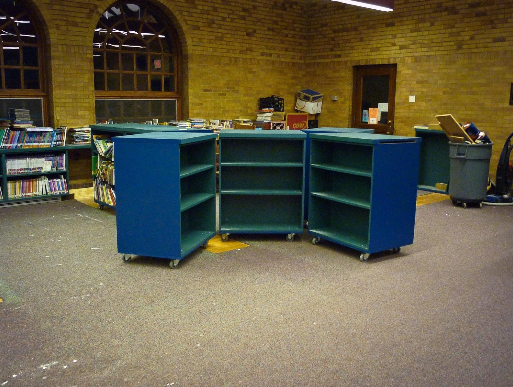 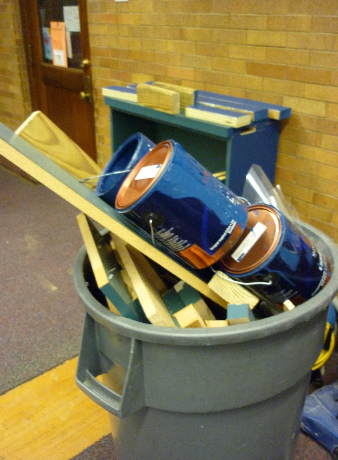 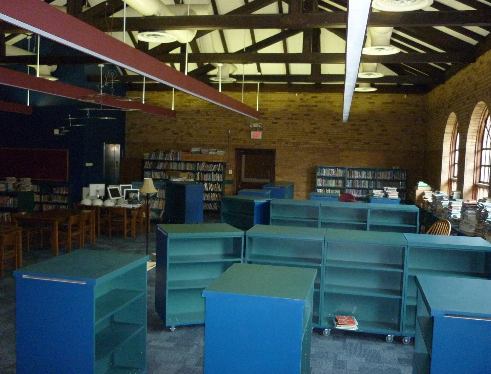 Of course, in the process of rebuilding the bookcases, I handled every single book multiple times and instituted the first ‘weed’ of the library in more than a quarter century. Well over a thousand books were purged due to being outdated, in poor condition or just no longer appropriate for our students. This was painful. Several staff members questioned my motives and had a very hard time letting things go. Classics were stored in an ‘archive.’ Treasures that were badly damaged were replaced with new and more lively editions. Clutter was removed, everything was sorted, organised and labeled. Stage one was complete. 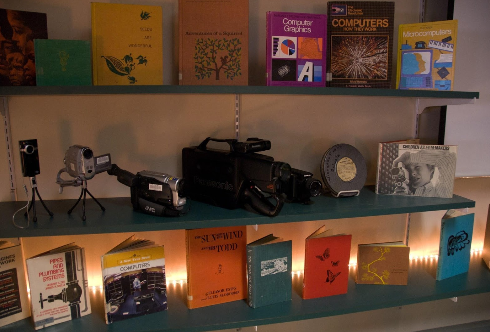 After this initial, somewhat violent first step, I made many smaller, less obvious changes. Policies and procedures were updated. The collection took a collective deep breath now that it could do so. New books were added by the hundred. Displays were developed and students and staff responded with ever higher check out rates. For the next five years I continued to research learning spaces, always adding to my storehouse of dreams and plans. Each visit to a new space for me was like a kid in a candy store. I looked to books like The Third Teacher and Make Space to help me continue to refine the connection between space and learning for all who used the space. Each week, our library could now host our Town Hall meetings. The bookcases, now on wheels, were moved to the sides and our entire school could fit in the Resource Center. For faculty meetings, the bookcases could be moved to allow all sorts of configurations of the library tables. 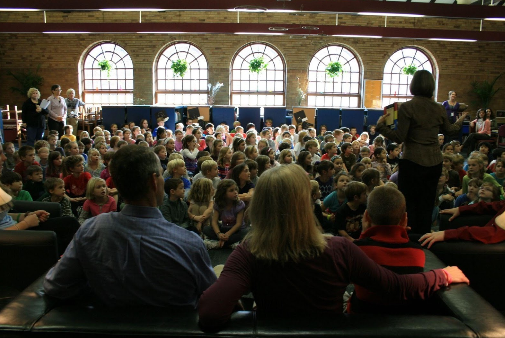 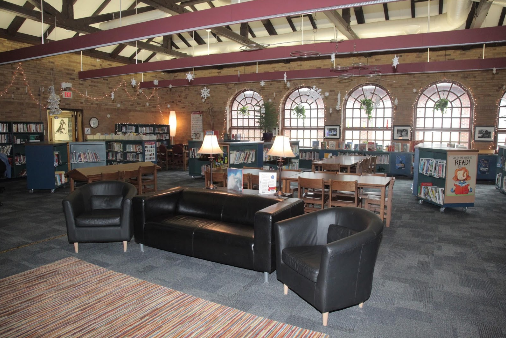 When our technology director and principal came to me and asked if I thought our space would work as a STEAM makerspace, I jumped at the chance. My five years of ‘research’ immediately came to the forefront of my mind. I began imagining how the space could be transformed even more. This started with furniture. Our sturdy-but-incredibly-heavy library chairs and tables needed to be replaced. After much research and field trips, we settled on flip tables from VS Furniture. These sturdy tables can be moved quickly and easily. We decided on a mix of stools and chairs. Our chairs were replaced with stacking, ergonomically friendly chairs. Both of these were significantly easier for our students to move making the whole transformation process even simpler. Next we began to think about how our computer lab space could be reimagined. This took even me a bit of time to accept. The big, bulky desktop computers were anchors in the computer lab for over a quarter century. Lessons were taught to the group and then everyone went to their desktop and worked. Getting rid of the desktops was revolutionary. Instead of having these large, heavy computers constantly in the space, the room was cleared. After beefing up the counters with simple galvanised piping, a huge new workspace was revealed. For those who experienced heart palpitations at the thought of losing our desktops, a laptop cart is within reach. In moments a class could once again use the space as a computer ‘lab.’ The rest of the time it can be used as one’s imagination desires. 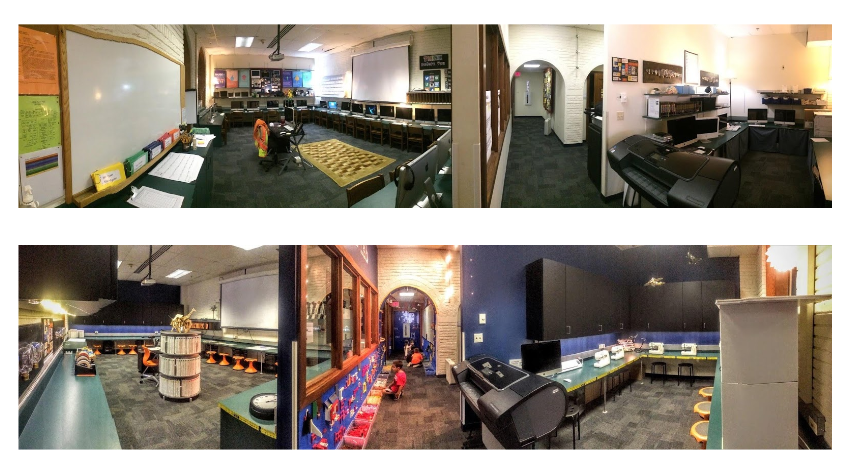 The next stage of the transformation was mostly cosmetic. I believe colour has a profound effect on your mood and productivity, and had seen this when I painted the 25 foot walls in our library dark blue. Everyone said that it seemed warmer, calmer and more peaceful. I continued this colour into our new space, now called the IDEA Lab. The shelves were taken down, the walls were repaired and were all painted the same beautiful shade of dark blue.

Furniture and cabinets were ordered. After more research and exploration, materials and supplies were ordered and curriculum started bubbling to the top.

The next stage of the transformation involved maximising the creative spaces. I took the low walls that joined the main library to the IDEA Lab and completely covered them in Lego base plates. This process, much like tiling was relatively simple, but has resulted in the biggest response from all stakeholders. A little pop of colour for our new television studio area and we have some personality and pizazz. 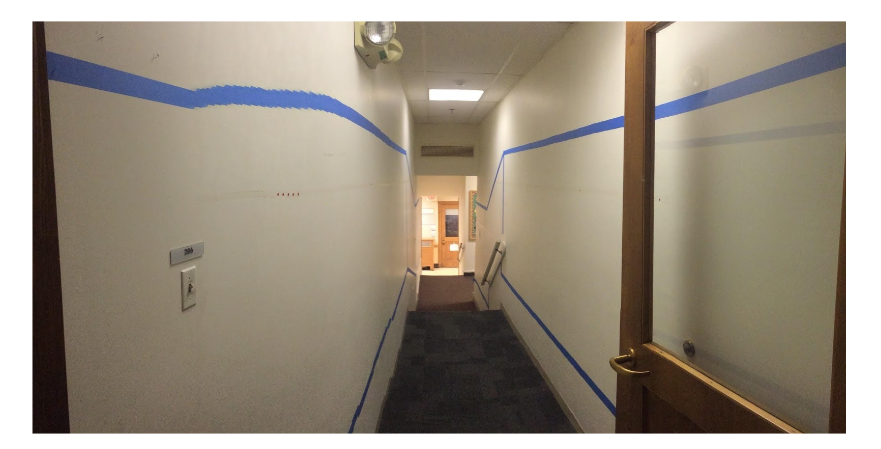 I took this funky, old hallway that is the result of nearly a century of evolving use of space and turned it into our Wonder Walls. Nearly 300 linear feet of dry erase board made from cheap shower board. The combination of the warm blue and the bright white made this hallway one that all our visitors now come through, being impressed with the wonderings of our students. The last step, so far, involves sorting, storing and organising the myriad of resources. We bought containers in bulk and put everything in its place. Shelves were built, cabinets and pegboard was installed. The effect is a sense of calm, order and possibility. 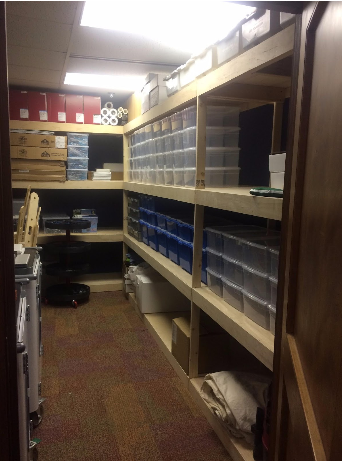 Final touches were added that accentuated the sense of possibility and pleasure of use. LED strip lighting provides a warm glow for creative minds. New window benches flip up to reveal enough room for a whole class to work. New workspace islands were created. Accents like our illuminated light bulb and foam letters show that care was put into the smallest of details.

When a transformation of this magnitude occurs, it must be matched with support from the administration. Our schedule was reconfigured in a way that celebrated the balance of books and bytes. We created sacred ‘library’ time in which students would be exposed to and explore all sorts of literary resources. We also created an hour long block for each class in which they would use the IDEA Lab. Grade levels were grouped by day to allow for even greater flexibility and collaboration.

The IDEA Lab is a pilot site for our small district. If the reception by our community is any indication, the transformation from a library to libratory should not only be taking place in all of our district’s schools, but in every school!

Have you undertaken such a renovation? Share your stories below!

Register for free to continue reading
Registration is a free and easy way to support us.
When you register, you'll join a grassroots community where you can:
• Enjoy unlimited access to articles
• Get recommendations tailored to your interests
• Attend virtual events with our leading contributors
Register Now
Already got an account?
Login
Read 7688 times