6 fun activities to get your pupils hooked

It is a truth universally acknowledged that teachers are under pressure to produce value-added results, follow an ever-changing curriculum and teach to inspection standards with limited amounts of planning and preparation time. With multiple lessons planned for the week, short-term, mid-term and long-term it is easy to fall into the same pattern of activities: the worksheets, the interactive whiteboard presentation that isn’t always interactive, and the card sort that is creased from its annual usage at the same stage in the trusty scheme of work. And let’s not mention the marking. The 10 mugs of coffee a day is a habit that’s hard to kick.

Enter the pupils. They aren’t the same as last year. They don’t all have the same learning styles. They don’t all have the same academic ability; some have additional learning needs. They definitely don’t all want to be there; and with some groups, neither do you, if you’re completely honest. I’ve been there. It was only with this experience of teaching that I developed activities that don’t require massive amounts of preparation and engage – dare I say it – all pupils in the group; and they can be adapted to cross-curricular subjects. It is because of this, as a sign of solidarity between fellow teaching professionals, I simply have to share!

Sharing best practice is something I am passionate about. There is no reason not to go crazy and tell everyone when you find or devise an activity that children enjoy. Who doesn’t want the buzz of seeing all children actually enjoying a lesson and the concomitant surprised faces that the lesson has gone quickly when it’s time to pack-up (and it’s not just yours!)?

I am a magpie for listening to people who share what works, because I like to give it a go and it inspires my own creativity. My favourite people in education are those who get excited at the prospect of team-teaching groups, so that ideas can be demonstrated, and learnt, ‘on the job’, and I regularly do this with my department. On our schemes of work, there is a dedicated column entitled ‘Outdoor English Education’, where we plan activities for a minimum of one lesson every fortnight that will take place outside of the classroom. Some of these activities are school trips, but many take place in the school grounds. Leading the way and showing staff what works is the most effective way of creating a change of approach from the team.

Here are some of the ideas for inside and outside the classroom that have had the pupils hooked this term.

1. Get a darts board – before the Risk Assessments are drawn up and declined, for a nominal amount you can purchase a Velcro darts board. Any quiz that you are planning to have on a topic can then be made even more competitive using this. Each team has to answer the teacher’s question, or questions devised by the opposition; if they get it correct, they throw the darts at the board. The number of points they get are the number of points they then accrue for the team. This ticks the numeracy box in English, as I encourage them to add the scores up for me and I record it on the board. If the darts don’t hit the dartboard or bounce off, they don’t score anything, even though they got it correct. Amazingly, they don’t feel too aggrieved as long as you’ve explained this could happen before you start the game! 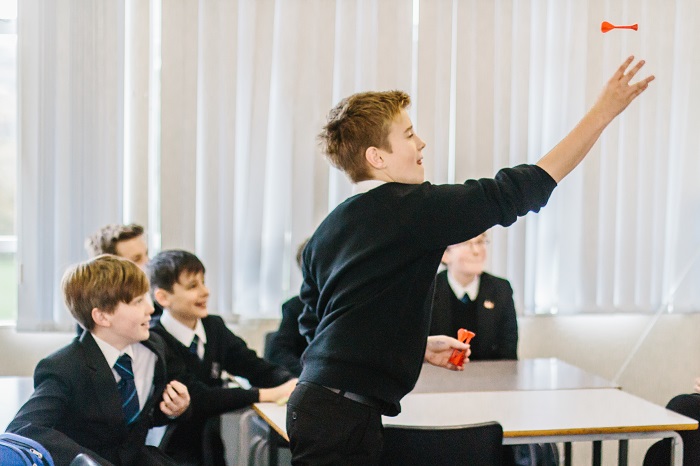 2. Play Jenga (indoor version or large, garden game version for outdoors) – in English, we have ‘Simile Summit’ and ‘Metaphor Mountain’ Jenga, where pupils have to give a simile or a metaphor respectively. They then take a piece of Jenga away. The thing that was being compared to is then the thing that needs to be compared to something else in the next pupil’s turn. For example, ‘love is (like) a flower that blossoms over time’ might be the first simile or metaphor, and then the next pupil needs to think of comparing a flower to something else. The game ends when the tower falls.

This could easily be adapted to cross-curricular subjects for key words. A pupil might be given a keyword and have to put it into a sentence, or give an example of the key word’s meaning before taking a piece of Jenga and the teacher then gives the next key word to the next student. The game ends when all the words are completed or the tower falls. 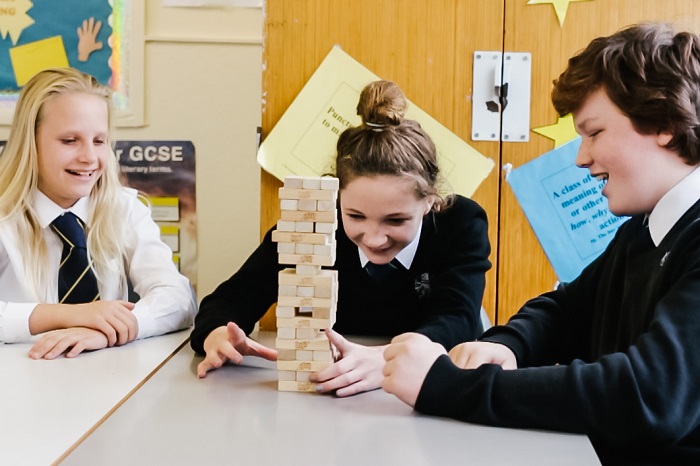 3. Channel your inner-Andy Murray, buy some tennis racquets and soft balls, and head to the tennis courts (sweat bands are optional)! Vocab tennis is a favourite game with younger students, but adding in the challenge of actually playing tennis is irresistible to the older students too. Even if they aren’t good at tennis, playing doubles removes the fear factor, alongside watching their teacher have a go outside of their natural English classroom habitat. Pupils have rallies, and every time they hit a ball they have to say a type of word (eg nouns). The recipient of the shot then has to think of another word beginning with the same letter that the previous word ended with. Scores are kept the same as in tennis. Be prepared for pupils to get increasingly better at this as the year progresses - and for rallies to get longer! It could be adapted for keywords in a subject, where pupils list the words they can think of for the topic until they can say no more or miss the shot; for times tables etc. 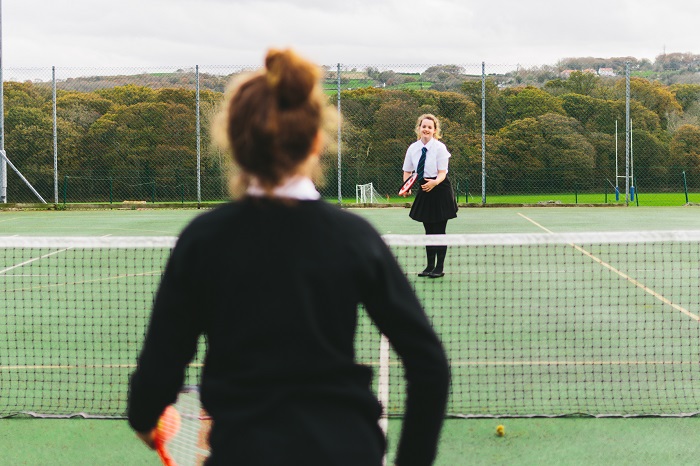 4. Tap into their childhood love of Postman Pat – you can buy a mini wooden post box from the Early Learning Centre, or just fashion one out of a cereal packet. Grab some card, cut it into postcard size pieces and hand one out to each of the group. In descriptive writing, I use this for pupils to write a setting on the card and then three descriptive writing devices - similes, metaphors, onomatopoeia, for example. I then crank up the Postman Pat theme tune and the pupils post their cards, which is then delivered to their peers (I really must purchase a Postman Pat hat!). The challenge is for the pupils to write a description of the setting on the postcard they have received, and to use the three descriptive devices as a minimum. This again could be a cross-curricular literacy challenge. In Business Studies, pupils might write the name of a company and three business terms that must be included in writing a report about the type of company it is and how it operates, for example. 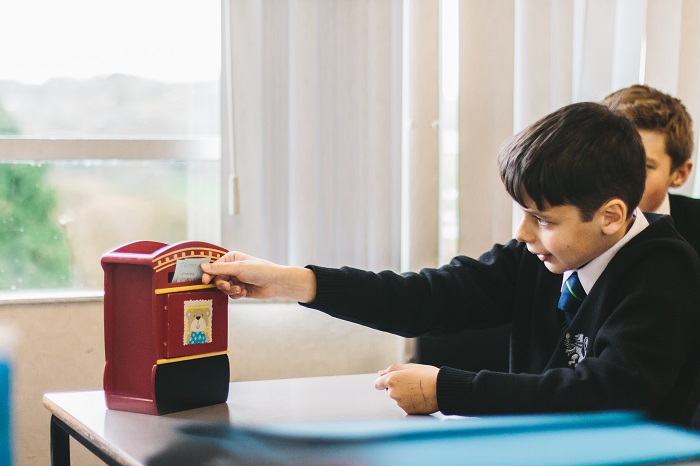 5. Run like Usain Bolt to give them a relay race - for any quiz you want to do, get outdoors and split the group into however many relay teams you need. You will need some pupils to be the quiz masters, and you can give them the questions to ask with the answers. For additional challenge, if they are more able, you need to know the answers themselves and seek your help if they don’t. A member of each team runs to the questioners, answers the question if they can, and returns to the team before the next person from their respective teams can run for the next question. If they can’t answer, somebody else from the team must answer it before they move on through the questions. If nobody answers correctly, the last person must be told the answer so that they can tell the team and learn what it was they didn’t know! The team to answer all their questions first and fastest is the winner. 6. Run to the answer – I use this for grammar and descriptive devices. I put cards around the Sports Hall and give examples of a verb, noun, adjective and adverb, with the children then running to the correct word type card. The last one there is out and then says the next word. With descriptive devices, I give sentences with techniques in such as personification and they have to run to the personification card. It can be used for theme/character revision etc. 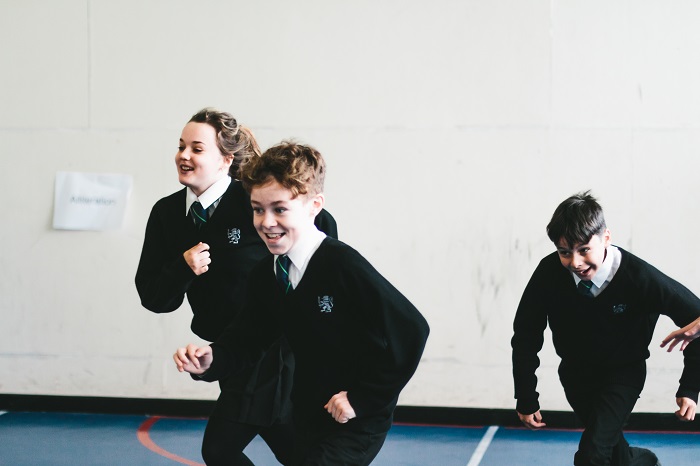 So, the next time you feel a lacklustre lesson on the horizon, give one of these activities a try; it might be just the simplest thing to prepare that leaves you and your pupils with the best buzz – and that has to be better than caffeine, right?!