Rachel Chatterjee and Ben Gill are operations commander and launch pilot respectively at Rocket Fund, a crowdfunding platform for schools created by Nesta.

Website: www.rocket.fund Email This email address is being protected from spambots. You need JavaScript enabled to view it.

Just over one year ago, Rocket Fund, the crowdfunding platform for schools, was launched by Nesta, the innovation foundation. Over this time, we’ve learnt what makes a successful school crowdfunding campaign, from creating a project to attracting donors.

Crowdfunding can be an incredibly rewarding experience; not only does it give you the opportunity to raise extra funds, it also gives you an opportunity to get the local community involved in your school. From the point of donation, each donor creates a personal link with the school. Furthermore, it’s a great marketing opportunity: you have the chance to tell everyone about the work you do, and why it’s so important. Once people have heard, they’re far more likely to want to be involved in the future.

With this in mind, here are our nine top tips for a successful school crowdfunding project.

Before your project is published online, there are a number of things to do to ensure you’re ready.

It’s inspirational to see one teacher running a fundraising campaign alone, and we’re often amazed by the results. Running a campaign solo certainly is possible; however, it’s far easier if the lead teacher has a fundraising team to support them. This could include other teachers, school governors - whose contacts often prove vital - the PTA, the receptionist, and even the school’s digital leaders. The more people involved, the wider the group of people you’ll be able to connect with - and the lighter the workload.

Example project: Ardleigh Green Junior School created a team to swim one mile of the Thames to support their fundraising - check out the ‘updates’ tab for pictures: https://rocket.fund/p/ardleighafloatchallenge 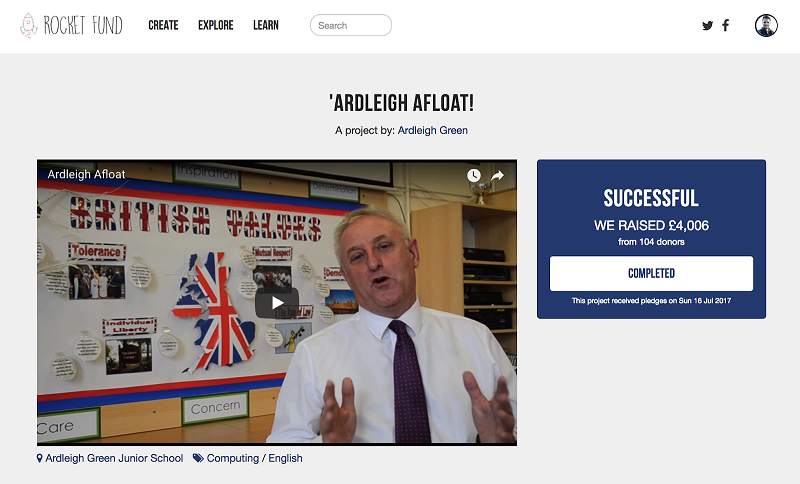 Potential donors may never have visited your school; so how are you going to persuade them that your students are great or that your project is worth supporting? Give as much detail as you can about your project: show how much it matters and what impact it will have on your students. Make your project stand out by adding quotes from the students, photos and - this is a big one - make a video. Although not essential, it will really bring your pitch to life. 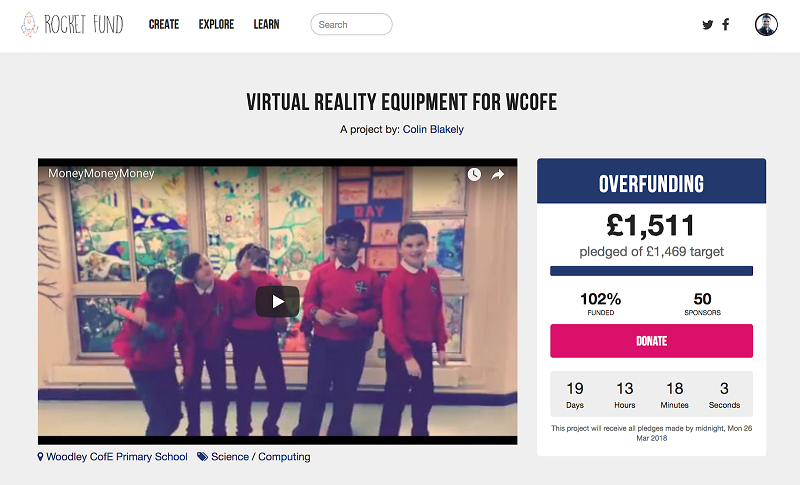 Not only does a video improve your crowdfunding page, schools that create fundraising videos have another advantage; students are involved with the campaign long before fundraising begins. These students tell their parents, who, in turn, tell friends and family. This means that momentum has been building before the project has even gone live - making your job on day one that much easier. 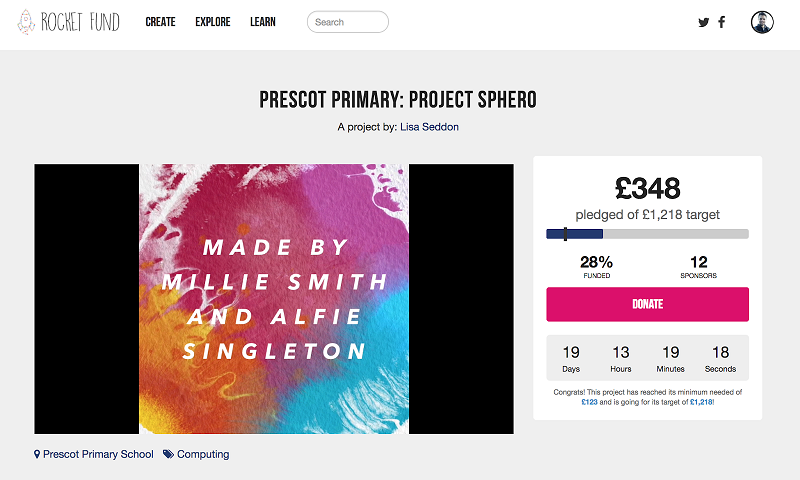 Congratulations, your project is live! Now you need some donors - here’s how to get them:

In crowdfunding, there’s a commonly-used systematic approach to attracting donations.

1. First, approach those who are most likely to donate: your close friends and family. Tell them about your project. As they are personally invested in the project through their relationship with you, they are extremely likely to donate.

2. Once you’ve had several donations from those close to you, reach out to those slightly further afield: your friends on Facebook/Twitter, and school parents who you can contact directly (via school email/text message systems). They’ll see that some people have donated already, and so they themselves may be more likely to do so.

3. Contact those with more distant links to the school, with general posts on the school’s social media accounts, and through local community groups, or via alumni. Again, your previous donations indicate that your campaign is worth supporting, so these new contacts are more likely to support you too.

4. Finally, reach out to local businesses. Now that your campaign has (hopefully) received considerable support, this is the prime time to contact local businesses. Explain what they’d get in return, eg great publicity.

Central Park Primary students wrote letters to local businesses, then went to say thank you after they had donated.

While you’re systematically making your way through the list of people to contact, think of this as spreading your attention rather than shifting away from one group. Your new group can be your focus, but don’t give up on those you’ve already contacted. Don’t be afraid to ask more than once. If a potential donor has quickly read your first Facebook post on their daily commute, they will be far more inclined to donate if they see the campaign mentioned again later.

Having said this, make sure you’re not spamming your contacts with the same information every day. A fundraising campaign can be an emotional rollercoaster. How did you feel when 30 people donated in the first hour? What about that extremely generous donation from the parent of an ex-pupil? Share these emotions. Remind your contacts about the purpose of your campaign. Remember to say thank you to all your donors as well, and celebrate reaching your milestones with them. 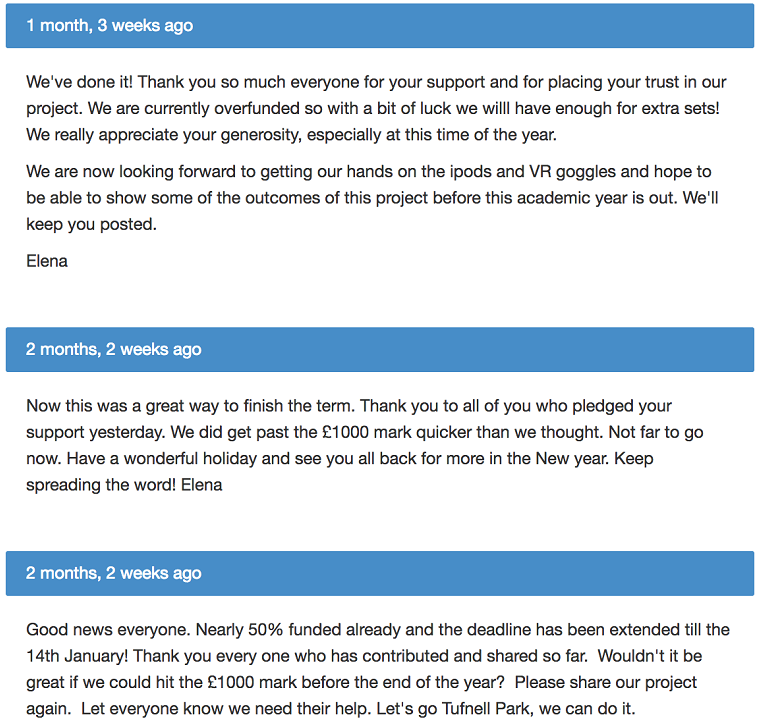 Tip #7: Remember: you can combine offline with online fundraising

While working in operations at Rocket Fund, I’ve been surprised at the number of teachers who’ve told me they’ve “only received donations from parents so far”. Fundraisers often see crowdfunding as a new concept which has to be separate from offline fundraising. However, online crowdfunding is simply a more effective way of fundraising: it enables you to reach a larger audience and collect larger donations. It also encourages donors to share your project with their networks, creating a snowball effect.

However, it doesn’t need to replace your traditional methods; don’t restrict yourself. Why not combine online and offline fundraising efforts? Collect the money from your bake sale and add it to your project on Rocket Fund!

@RocketFundUK delighted with our latest total lots to mark off our rocket today. Still need help to reach our target total @DunblanePrimary pic.twitter.com/4cNfpQH57H

Although the reason for your campaign is to raise funds, this doesn’t mean every mention of your campaign has to involve money. Sometimes it’s a good idea to shift your ask. For example, instead of asking local businesses directly for money, you could simply ask them to spread the word, or for prize donations for a school raffle. And instead of asking parents to donate, why not ask them to share the project with their networks?

Tip #9: Keep everyone in the loop

When your project has finished, celebrate this with everyone who’s been involved! Once you’ve received what you were fundraising for, send pictures to everyone who donated their time or money. Make sure people who have invested know the impact they’ve had. If they are aware that their donation has been valuable, they are more likely to donate next time.

Some of the schools on Rocket Fund have said that businesses are keen to maintain links after they have donated. Now that the local community knows about the importance of your school’s work and has an easy way to support you, why not maintain this momentum? Increased connections between your school and its local (or distant) community can only be a positive thing.

Crowdfunding for schools bears a lot of value, and not all of it monetary. Many of the skills you will teach your students during a crowdfunding campaign are extremely relevant to the modern world, including project management, pitch creation, media production and marketing skills. It’s also an enjoyable experience, and will feel like a real achievement for the children involved.

Register for free to continue reading
Registration is a free and easy way to support us.
When you register, you'll join a grassroots community where you can:
• Enjoy unlimited access to articles
• Get recommendations tailored to your interests
• Attend virtual events with our leading contributors
Register Now
Already got an account?
Login
Read 5418 times
Tweet