An English trip to Shakespeare's birthplace

A teacher for 19 years, ‘cazzypot’ has taught in key stages 2-4 in mainstream schools, special schools and, more recently, in the role of Subject Leader for English in a Pupil Referral Unit. She also worked for some time in an LEA funded advisory capacity, providing strategies for dealing with pupil behaviour issues. She’s also offered teachers advice, resources and guidance on the National Literacy Strategy.

Website: www.cazzypotsblog.wordpress.com/ Email This email address is being protected from spambots. You need JavaScript enabled to view it.

For the last fourteen years I have taught English to secondary-aged pupils at a Pupil Referral Unit in the Midlands. Many of these students are vulnerable and complex, some are in care, and a large number have severe behavioural difficulties. All of this means that we must be especially cautious when choosing a location for school trip. Notwithstanding the risks, last summer I made the decision to take a KS3 group to visit Shakespeare’s birthplace, in Stratford-upon-Avon.

This was as part of an English topic we were doing on the theme of ‘Performance’. We'd already studied The Globe Theatre, in context, and learned about some of its fascinating history. More importantly, perhaps, we’d looked at extracts from some of Shakespeare's plays and also studied plot synopses and analysed a selection of quotes.

Now, I must confess that I was dreading this trip. As the day approached, I began to question what on earth I thought I was doing, arranging to take a group of potential delinquents to such a precious, historic place. I even made a special visit to the house, prior to our trip, to forewarn them and discuss the risk-assessment aspect with the staff. En route to work on the M5 on the morning of the trip, I honestly considered continuing my journey south for hot dogs on the beach in Devon. At least I’d have been spared the shame of becoming headline news for allowing a bunch of highly unpredictable kids to wreak havoc at Shakespeare’s treasured childhood home!

Thankfully (and to my great relief!) my fears turned out to be totally unfounded. To my surprise and absolute delight, the pupils were completely and utterly transfixed for the entire day.

Paired-up and armed with clipboards and cameras, they took some wonderful photographs and made intelligent notes. They asked pertinent questions of the excellent staff, and joined in enthusiastically with the brilliant performances and songs in the yard outside. Here, they were encouraged to sing traditional Elizabethan songs 'in the round'. Soon after this, several of them were given lines to say, and wooden swords to join in with a fight scene. A substantial crowd gathered to watch their performances, and the delight of the kids was palpable.

Inside the house, they seemed to particularly enjoy hearing about Shakespeare's father's glove-making business, and visiting the room where the goods were actually made and sold. They were agog on visiting the bedroom area and learning that the female offspring generally slept on the floor! They were also very impressed with the kitchen and seemed fascinated to learn how the food was prepared - particularly the tiny bread rolls being cooked on a flat plate above the open fire. For all of us, I think, the sun literally shone on every single aspect of the day. 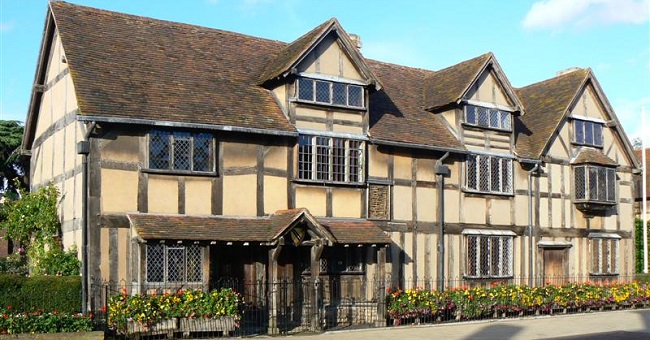 But the moments that resonate, perhaps even more so - especially in light of the new curriculum and its fairly hefty Shakespearean requirement, occurred in the preliminary exhibition, before we’d even entered the main house. Here, there is more of a focus on Shakespeare's works, rather than the minutiae of Elizabethan life. Amongst many other things, the pupils were able to study a scale model of The Globe - which also detailed the surrounding area. They were delighted to see an early original volume of the complete works of Shakespeare, carefully preserved in a glass case.

They were also very impressed with a life-size model of the man himself, seated at a small wooden desk, with a quill pen in hand. Meanwhile, screens were showing scenes from renowned adaptations of some of the plays and speakers played other well-known excerpts. At one point, a booming voice was reciting ‘The Seven Ages of Man’. “Miss, Miss!” shouted a year 7 girl. “It’s ‘All The World’s a Stage!’” A few minutes later a cackling female voice began, “When shall we three meet again…” “Oh, Miss! I know that!” one of my most damaged and disaffected boys exclaimed immediately “…It’s the witches from Macbeth!"

It seems to me that the earlier pupils are given access to Shakespeare’s works, the better. The extraordinary timelessness of Shakespeare’s writing is already obvious: the perennial human conditions of love, war, money, rivalry, parenting, jealousy and death never change. Couple this with Shakespeare's wonderful storylines and the children's own youthful, creative imagination, and the texts come alive. Indeed, as the popularity of Tolkien’s ‘Lord of the Rings’ and ‘The Hobbit’, and JK Rowling's 'Harry Potter' series have more recently proven, fantasy, fairy tales, the eternal battle between ‘good’ and ‘bad’ are no barrier to young minds - quite the contrary. Indeed, as the youngster noted, the man said: "All the world's a stage, and all the men and women merely players...".

Given the propensity that some educationalists have to suggest that Shakespeare is 'boring', 'not relevant' to their lives, or simply 'too difficult´ for certain young people to master, I think accounts of experiences such as this should at least go some way towards demonstrating how flawed such thinking is. The pupils clearly loved being there. There is no doubt that our trip enhanced and added an extra dimension to the work we were doing in class and hopefully breathed extra energy and life into their fledgling Shakespeare studies. This particular group were clearly delighted to have gained further (tangible) knowledge and understanding about the man and his works. As for their future studies, I can only hope that experiences like this will make them feel excited about, rather than daunted by, any future encounters with Shakespeare's work.

What amazing school trips have you enjoyed? Let us know below!

Register for free to continue reading
Registration is a free and easy way to support us.
When you register, you'll join a grassroots community where you can:
• Enjoy unlimited access to articles
• Get recommendations tailored to your interests
• Attend virtual events with our leading contributors
Register Now
Already got an account?
Login
Read 7160 times
Tweet