Educating and innovating - 25 years of the World Wide Web

Phil Worms is currently Chief Marketing Officer for Glasgow headquartered iomart Group plc, one of Europe’s leading cloud computing companies. He has spent 30 years in the IT industry having worked in a variety of roles with BT, Centrica and Texas based VarTec Telecom. During his career, Phil has led many technology firsts including the roll out of consumer broadband across the UK. Phil has sat on several national and Parliamentary advisory committees and regularly contributes internet and “new media” related features for trade publications and national newspapers. He writes an award winning blog, is a board member of eSkills Scotland and a Fellow of the Royal Society of Arts. He is currently leading a charitable campaign to create a Digital Skills Academy in Helensburgh, Scotland, birthplace of TV pioneer John Logie Baird.

Website: www.iomart.com/about Email This email address is being protected from spambots. You need JavaScript enabled to view it.

25 years ago, 33-year-old British scientist Tim Berners-Lee created one of the greatest tools the human race has ever seen. The World Wide Web opens doors for billions of people worldwide and makes the impossible possible - plus, Innovate My School couldn’t exist without Berners-Lee’s invention. Phil Worms, Iomart’s director of Marketing & Corporate Comms, comes to IMS to discuss why the net is so invaluable for education. 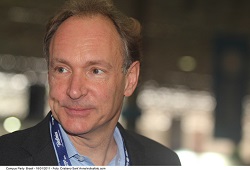 Happy Birthday World Wide Web! It is 25 years since a young British computer scientist named Tim Berners-Lee submitted his idea for allowing scientists to share information between educational faculties across the world to his manager at CERN. The idea that his boss described as a “vague, but interesting” started a revolution in learning which continues today. It has changed the way we teach, the way we learn and how we access information and communicate with each other.

Before the World Wide Web entered the classroom, we learned by rote from a teacher who wrote things on the blackboard with white chalk – the traditional ‘talk and chalk’ approach. If we wanted to source or research information, we either made notes, referred to our text books or visited a library. This doesn’t compute for the school child of today. Today’s students are better connected, have millions of sources for reference and are more globally aware than ever. It’s quite incredible how much knowledge can be accessed at the click of mouse or the swipe of a screen.

It was Thomas Jefferson who stated “All that is necessary for a student is access to a library”, and whilst this is obviously over-simplistic, it does highlight the fundamental fact that having access to global databases of information is key to the education of an open society.

The internet offers us the biggest single opportunity, since the founding of the Library of Alexandria in 288 BC when papyrus replaced tablet, to advance the publication of all of man’s knowledge across the globe for the benefit of all and many have seized on it.

Educational scientist Sugata Mitra, winner of the 2013 TED Prize, recognised the transformational power that the web could bring to education early on. He has inspired children here in the UK and in countries like India, South Africa and Mexico to self-learn by providing loosely supervised access to the web. He is building ‘schools in the Cloud’ using technology and internet access to allow children to explore and learn from one another rather than having to attend static and formulaic lessons in a classroom.

Millions of learners young and old can sign up for free online courses from the likes of Massachusetts Institute of Technology (MIT) and Harvard University, and now these Massive Open Online Courses, or MOOCs, are coming to the UK with the launch of web sites like FutureLearn.

And games are now considered a way to open up learning in exciting ways. Minecraft is being used by teachers to encourage the youngest children to learn about strategy and almost one million children are now being taught using Zondle software which allows teachers to create and share educational content within online games to meet the specific learning needs of their students. As one teacher puts it, “You know you’re on to something when a kid chooses to stay in school after the bell rings!”

And not only is the use of technology expanding our children’s learning experience; it is also equipping them with the skills that virtually every employer will demand over the coming years.
I sit on the board of eSkills Scotland, where we constantly debate the challenge of preparing the children who come out of schools, colleges and universities for life in a digital world. Girls and boys should be encouraged to code in the classroom long before they get to university, just as they should be encouraged to learn about how to run a business. Our industry, the technology industry, is working with educational institutions to close the skills gap that currently exists and leaves us looking at a potential shortfall of candidates by demonstrating the sorts of jobs we can offer and encouraging more girls to get involved.

The digital sector is one of the fastest growing parts of the UK economy and offers huge opportunities to those who are willing to embrace it. We want and need our young people to ‘create’ technology rather than simply ‘consume’ it.

“This is for everyone,” were the words that Sir Tim Berners-Lee typed on the computer screen during the opening ceremony of the London 2012 Olympics. He was right. It is for everyone, and we must ensure that every child can take advantage of the opportunities it can bring.

25 years on, there are many of us that simply cannot imagine life without the internet, but we must not fall into the trap of assuming that everyone else is busy browsing, tweeting, researching and emailing. We couldn’t be more wrong. Government statistics reveal that about one-third of the UK’s population still does not have access to the Internet at home and roughly a quarter of the UK’s adult population has never accessed the Internet at all.

Let’s not deny future generations one of the greatest gifts that we can bestow: opportunity. We can’t ever hope to be a truly aspirational society if we continue to deny people the chance to further themselves based upon their ability to pay their way or their physical location.

Tim Berners-Lee could have made himself billions and billions of pounds had he chosen to commercialise the web. He didn’t, he chose to give it to the world for free. We owe it to this man to deliver his original vision – we must provide ‘everyone’ with equal access.