Five storytelling techniques to support literacy in the classroom

Wendy Shearer is a professional storyteller who performs stories across the UK in schools, at festivals, major museums and attractions. Her repertoire of tales is drawn mostly from her Afro-Caribbean heritage and specialist area of Ancient Greek literature and mythology. Following several years as a BBC Children’s TV producer, she is passionate about inspiring the next generation of readers, writers and storytellers. You can find her on Facebook at www.facebook.com/StoryBoatTales.

Website: www.Storyboat.co.uk Email This email address is being protected from spambots. You need JavaScript enabled to view it.

Originally published on 2nd June 2016 To celebrate the 2015/16 school year, we're republishing the most populacle of each month. Today: June's top read. We'd love to know what you think, and if you've used these ideas yourself in the classroom, let us know in the comr artiments section!

Storytelling in the classroom can be a powerful way to support literacy. Children can be so absorbed in the tale, they are inspired to retell what they’ve heard to others, motivated to read it for themselves and encouraged to take it further and write their own parts or versions. The National Literacy Trust advocates that ‘speaking and listening skills underpin all learning’.

In my experience, there are always a few pupils who are quite confident and eager to join in a storytelling session"Ask them to carry out the actions of one of the characters while you’re telling the story." when there’s an opportunity to speak or share their thoughts. That’s a wonderful thing, but it’s also really rewarding to hear teachers remark how storytelling can give less confident students an opportunity to take the lead and let their imaginations run riot.

Here are a five storytelling techniques for you to use during or after your storytelling session with students:

Everyone telling a story wants to bring the characters alive for their listeners. A fun and inclusive way to do this is to choose children and ask them to carry out the actions of one of the characters while you’re telling the story. A jumping monkey, a flat footed elephant or a crooked, mean-looking witch. I’ve found that allowing pupils, from Foundation stage right up to Year 6, to physically jump into the tale with you captures their imagination and encourages all abilities to shine in their own way.

When there’s repetition with dialogue or rhymes in the story, I’ve been amazed how quickly pupils pick it up and sometimes run away with the story, acting it out before your very eyes! When telling folktales from Africa or the Caribbean, there can be lots of animal characters in the trickster stories. In keeping with the traditional style of these tales, there is often a rhyme or a ‘call and response’ between characters. I find that pupils easily catch on to this style of storytelling and it’s a lively way for them to interact with the story.

With older pupils you may wish to do story development afterwards, and there’s an interesting exercise I took part in during a workshop led by renowned storyteller Jan Blake. When getting pupils to think about the motivations and actions of characters in the story you’ve told, choose someone to be that character and other pupils can ask them questions. The chosen pupil has to answer the questions in character, responding as if they were in the story. It’s a creative and challenging way to get everyone understanding the meaning behind a story. Sometimes the questions from pupils have been ludicrous, but it’s good to let the imagination have a little wriggle room! You could also put pupils into pairs or groups. Everyone can take a different character in a story and have conversations with each other. The drama which unfolds can be really rewarding as pupils are not only retelling some of the story they’ve heard, but also creating their own parts of it. 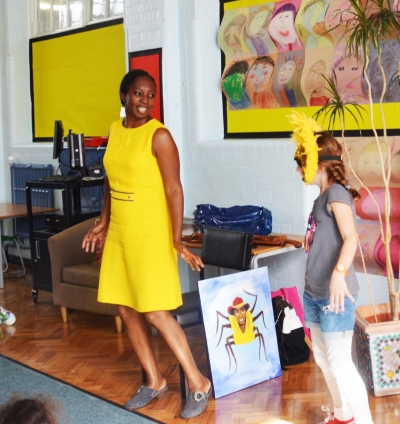 2. Music to your ears

Playing pre-recorded music to accompany your storytelling can help pupils get to grips with the story and ignite their imagination. You may try playing a traditional tune that is from the country of your story or has instruments which are reflected in your tale. "You could play recorded sound effects, like forest noises, storms and rainforest animals."When set as background music, it’s another way to transport everyone to a different time and place, using their listening skills.

Rather than a melody, you could also play recorded sound effects, like forest noises, storms and rainforest animals. It is a useful marker to signify that the storytelling session has begun. Everyone then has an opportunity to share with you what they can identify from the sounds which also creates the scene of your story.

With younger pupils, another way to make the story interactive is to allow them to create simple sound effects with their voices, eg animal sounds, creaking, stamping - whatever will go along with your story. This is also encourages everyone to join in regardless of their language skills.

Props can be a beautiful way to illustrate a story. A large conch shell instantly takes everyone to the beach or a tropical island, a piece of material can take the form of the sea or the design could reflect its country of origin.

There is lots of appeal with using props, but they do need to be managed carefully with younger children. Otherwise, they become an unwelcome distraction. The best thing to do to is to show everyone your prop and then cover it up. Out of sight, out of mind!

As the storyteller, you hold the power to guide the story. You know which direction it needs to take and what the ending is going to be. This is also a unique opportunity to get your pupils involved with developing the plot by asking them a few questions about what could happen next in the story, or what a character needs to do to solve a problem. If it is a familiar tale, you could ask pupils to come up with their version of the ending. What would they like to see happen next? These scenarios give everyone a chance to become the storyteller and develop the story in a collaborative, creative way.

If you have time to spend working on a story, a fantastic technique to help children remember the stages of a story is on of Pie Corbett’s Talk 4 Writing techniques. You can all create a 'Story Map' together. Rather than writing out the story in words, pupils can draw pictures and symbols which map out the story and the characters. When you have finished, they can use the map to retell the story in their own words. This can have a positive effect on their confidence and ability to articulate the story.

I hope these tried and tested storytelling techniques have piqued your interest. Perhaps they will support your literacy development in the in the classroom too.

Do you tell stories in the classroom? Share your experiences below.