David Chalk has been a Secondary Science teacher for 11 years. He has taught from KS3 to 5 and is a firm believer in being innovative within his teaching and loves using new pedagogical techniques. David's motto is 'If you keep trying the same old things, you'll keep getting the same old results'. Imaginative teaching ideas help stimulate students and improve student retention. He has been the second in department for five years, and has interests in CPD, resource development and teacher training. Facebook: @teachlikeahero

Box set binging, is it a good thing? Some people would argue for and an equal amount against. When you are watching a full series you get to know the characters, not forget what happened in the previous episode and understand the plot of the series. I realise at this point you’re probably thinking that you were going to read an article on a speed lesson taught using zombies, however, everything should become apparent shortly. At some point over the summer when I decided to watch The Walking Dead, in-between thinking that every episode is basically the same, I noted down in the margin of my planner ‘teach a lesson using zombies’. About three weeks ago, I found this this note. This is my story about what happened next.

Over the last term, I have been mentoring a PGCE student in his school experience placement. I think that it is an important part in the process to demonstrate a range of pedagogical techniques as this is an area that covering theory at university does not prepare them for. To achieve this I’ve tried to put together a few lessons which tick all the boxes. When I realised that the next lesson I was going to teach my Year 10s was on speed and time distance graphs, I was given the perfect opportunity to use people being chased by zombies in a lesson. 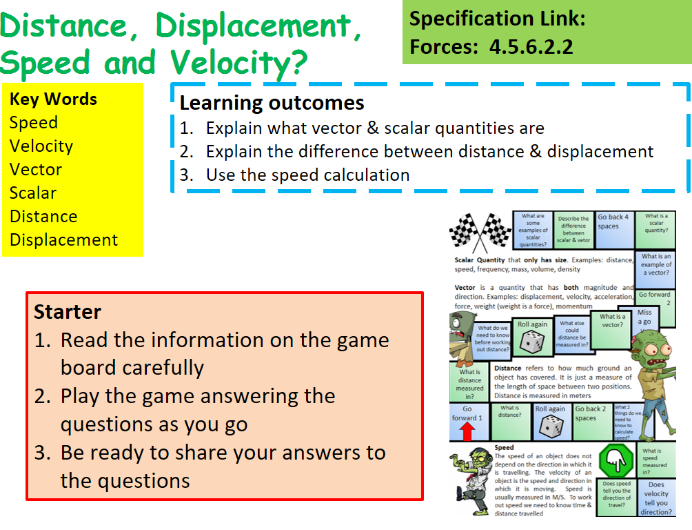 At the start of every lesson, I have trained my students to come in, get the title, key words, and date down without being asked. This plays two roles in the start of the lesson. Firstly it helps settle your students as they like routine, and secondly one of the key areas that students lose marks on is their use of key words. If they have the key words for the lesson it helps keep them in the forefront of their minds so they are more likely to use them.

The use of key words is also the first thing which will help tick the box for literacy within the lesson. The remainder of the starter activity focuses on students working their way through a game based on the definitions for some of the key words they will be using. Before starting to play the game, you need to make sure that students know they need to read the information (you wouldn’t believe how many don’t realise that important point), and that after they have finished playing the game you will be picking at them at random to answer questions they should have gone through. This starter activity will give students a good basis for the context of the lesson and will get them reading without realising that’s what they are doing.

One of the new aspects of the specification is that students need to recognise the differences between scalar and vector quantities. There is a good chance that you will have already taught them a separate lesson on this, however, I think that it is important in Physics topics that students keep revisiting content to enable them to make connections. The first task in the main part of the lesson is designed to do this, and should be quick and simple. After a short discussion with students to remind them what these two quantities are, ask them to write down in the back of one of their pairs book which each of the examples is. You can then ask students which they think each is then by a show of hands show how they did. By working through this activity in pairs, students should be able to help remind each other, and by having to make a list in the back of one of their books all students must participate. 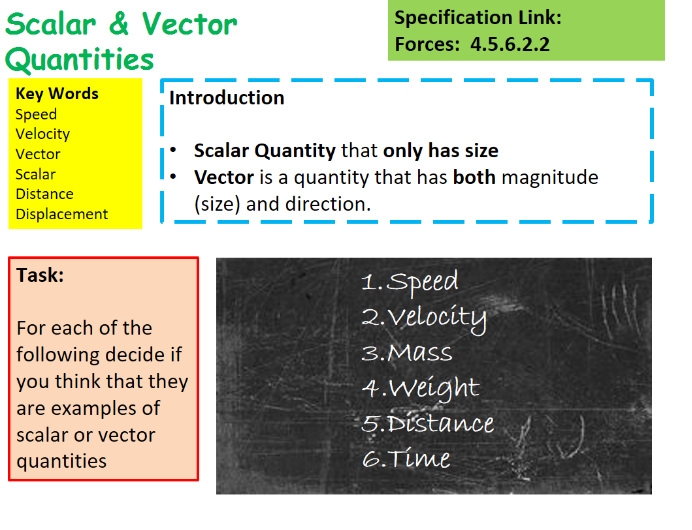 The second task is centred around the speed equation; more specifically, helping students to recall how to use this equation. From KS3, students should already have some understanding about how to calculate speed, but they will need reminding. The way that I have approached this is to quickly go through the equations, then ‘gamify’ the activity.

This idea of gamifying activities has been around for a while now, but it basically boils down to taking something mundane and turning it into a simple game so students learn without realising that they are learning. As students will already have a dice handy from the starter activity, it made sense to me to use it again. The way that it works is that students take it in turns to roll a dice to pick which set of variables to use to calculate speed with. After the activity, make sure that you ask a few specific students what they calculated. 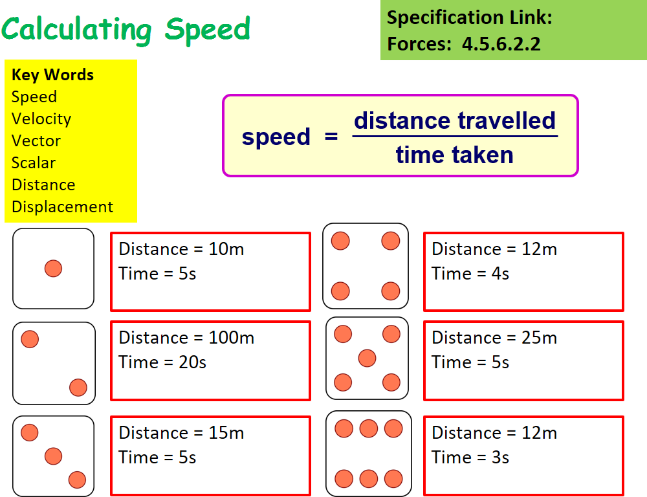 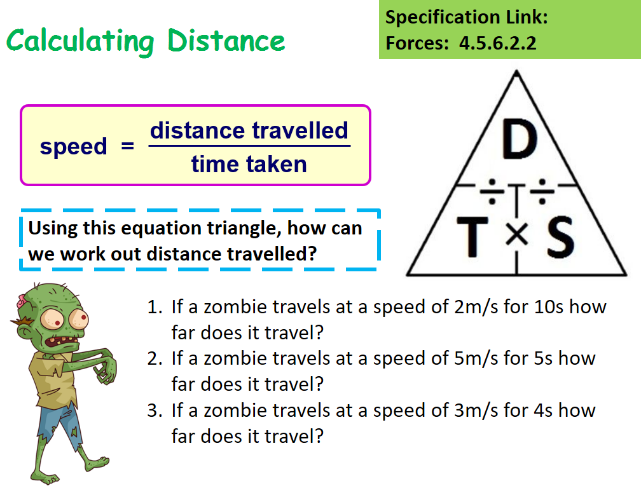 Before the lesson began, task four was set up in the centre of the room, so the anticipation will have been building. It’s at this point that the zombie aspect of the lesson really comes into its own. On two or three tables in the middle of the room draw a street map, place on a few buildings, and position several humans and zombies around the streets.

Before students start the activity they need to draw a table with columns for time, distance, total time and total distance for them to fill in during the activity. In pairs, decide if students are going to be a human or a zombie. The aim of the humans is to avoid the zombies, and the aim of the zombies is to eat the humans’ brains!

The other main thing to do before starting the activity is to make sure that students know that 1cm is equal to 1m, and that they remember the equation they need to use. To carry out the activity, students will need to move a total of six times. By doing this they will produce enough data in their table which they will use later in the lesson. Each turn you need to tell students how many seconds they are moving for and they need to roll a dice to see what speed they are moving at. By doing this, students will be able to work out the distance they get to move each time.

Once students have completed being chased by zombies, they should have enough data to be able to draw a distance/time graph. Don’t assume that students will be able to automatically turn the data they have gathered into something usable. I found explaining how to work out total time and distance using an example helped with any misconceptions. As with many activities, students will possibly need some help with drawing graphs. Using the data I already had on the board, I quickly drew an example graph on the board to demonstrate to students what they need to do. After students, have completed their graphs, give them a little time to swap graphs and peer assess. This is the last activity in the main part of the lesson and truly ensures that your numeracy box is ticked.

The plenary of the lesson is designed to assess what students have covered and, at the same time, tick the box for improving exam technique. Give each student a six mark question on analysing a distance/time graph. Once students have answered the question, get them to swap their answer with their partner and then peer assess it using the attached mark scheme. When students are marking each other’s work, I put up some simple guidelines on how to mark a long answer question.

By the end of the lesson I found that my students understood the content, and at the same time had a bit of fun. One word of warning: other teachers may ask you why students leaving your room are pretending to be zombies! My answer was “obviously, they like brains”.

Do you use gamification in your classroom? Share your stories below.

Register for free to continue reading
Registration is a free and easy way to support us.
When you register, you'll join a grassroots community where you can:
• Enjoy unlimited access to articles
• Get recommendations tailored to your interests
• Attend virtual events with our leading contributors
Register Now
Already got an account?
Login
Read 7692 times
Tweet