How can we use the power of GBL in the History classroom?

Jonny Hemphill is a History teacher who works at Small Heath School, which is in inner-city Birmingham. He is probably best known for his YouTube channel, worcesterjonny which includes useful videos across all the key stages. Many of the videos have been designed to supplement the History of Medicine and Germany 1919-1945 topics that are run by Edexcel and OCR.

Website: https://www.youtube.com/user/worcesterjonny Email This email address is being protected from spambots. You need JavaScript enabled to view it.

Many of us have grown up playing board games. I spent endless hours building up real estate portfolios when playing Monopoly and solved murders playing Cluedo. These days I dig these games out on wet Sundays to play with my own children. I work in a school where many of my pupils may not get a chance to play these games, and therefore I could see not only educational benefits, but it also gave my pupils a chance to interact with one and another and have some fun. This great mix of social interaction, competition and education has certainly helped my pupils over the years.

I remember getting a pack of Top Trumps superhero cards when I was a child and trying to out-trump my friends. This has been easily applied to my Key Stage 4 pupils, with packs of cards produced using characters from the History of Medicine and individuals and groups from Germany 1919-1945. 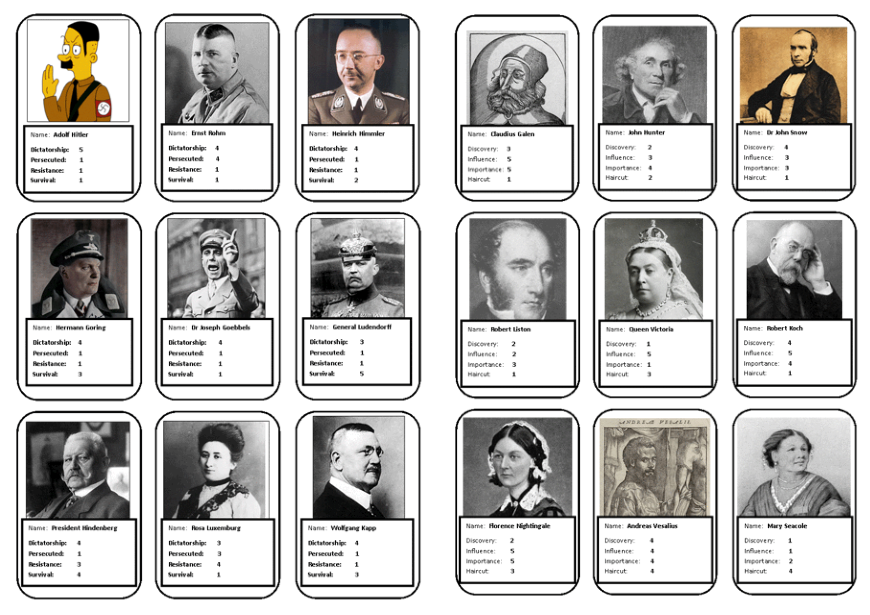 The basic idea of Top Trumps is to beat your opponent’s score in one of four or five categories. The cards are divided out among the players face-down. The first pupil lifts up the top card and reads out a score from one of the categories. If the score beats their opponent’s score, the player wins the card. It really is that simple! But, in terms of educational use it’s a little basic, especially if the cards have been designed in advance with the scores already produced by the teacher. This is easily remedied by giving the pupils the cards and getting them to assign scores to the categories. The pupils have to justify why they have given the scores to the individuals.

These cards can be used in lots of different ways. I sometimes get my pupils to the put the cards into chronological order, or I give the pupils a particular event, for example the Munich Putsch, where they have to hunt through their pack of cards to find the individuals or groups associated with the event. Finally, I can simply walk around the class and ask the pupils who the individuals are and why they are important to the topic we are studying.

I recently produced a board game about the life of a child in 19th century England. Simply put, I wanted the pupils to understand that if you were poor during this period, then their life chances weren’t great. The game could be played with two to four pupils. I got all the pupils to design their own counter with a picture of themselves to make it a little more personal. The pupils had a sheet of paper with their name and age on it, and as they made their way around the board they had to record what happened to them. 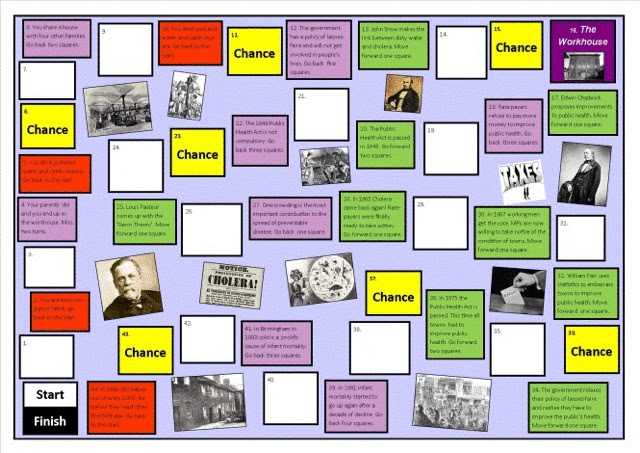 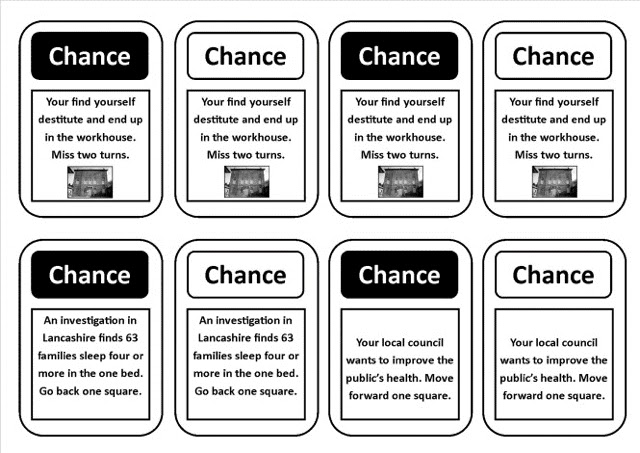 As I have already stated, the game was to be quite difficult to reflect the poor public health problems of the era. If you landed on square, which stated you had contracted cholera, it simply sent you back to the start. The board game included many of the public health problems, the Public Health Acts and the factors that led to improved public health in the 19th century. I also threw in some chance cards that often led to more illness or death. The square before the finish was the most striking, as it stated that 163 out of every 1000 children died before their first birthday. This was to illustrate that although the government was getting more involved in the lives of ordinary people in the 19th century, the problem of poverty was still very much present.

This board game could be used to introduce public health problems or to recap what they had learnt over a number of lessons. I suppose the reason I produced the game was to re-enforce what the pupils needed to know to help them answer a GCSE question. However, for the pupils it was much more about having some fun in their lessons and interacting with other pupils in the class that they wouldn’t normally get a chance to interact with. In hindsight, I could have simply given the pupils a blank board game and a textbook and asked them to come up with their own version, but secretly I enjoyed the process of making it.

Snakes and Ladders-style board games have also been used to great effect in my lessons. One that I use helps to answer the question ‘How did Hitler become Chancellor in 1933?’ The game is set out chronologically, with the pitfalls and the factors that helped Hitler become Chancellor along the way. Throw in a few ladders to help Hitler climb, and a few snakes for him to slip-up on along the way, and you have an engaging 10-15 mins for you pupils. 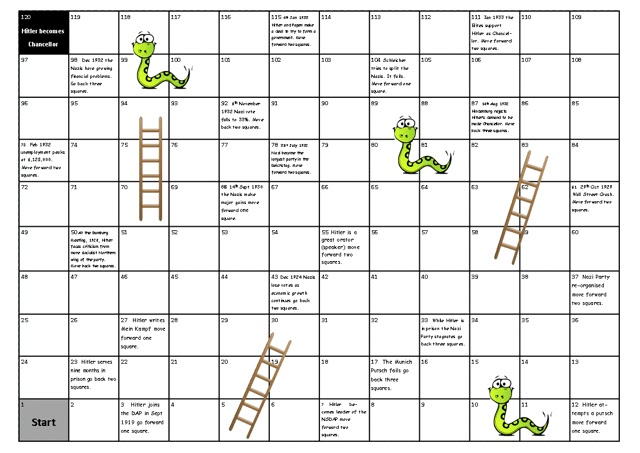 I use a similar version for my year 8 pupils when they look at causes of the English Civil War, where they are given a key with all the different factors that led to the conflict. 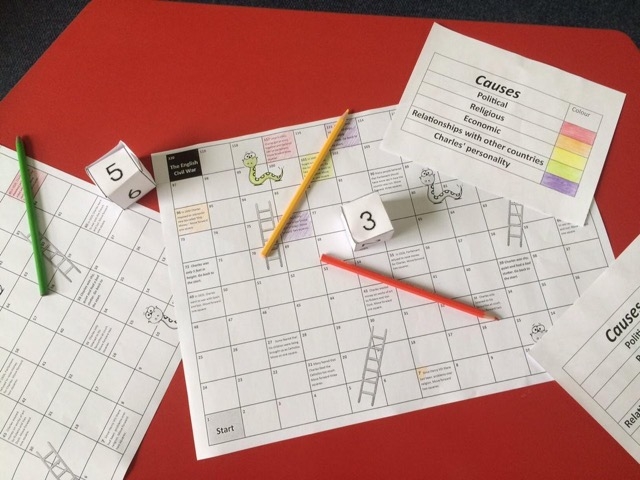 The pupils then have to read through a list of events and identify which event links with each factor(s). For example, ‘Many in England feared that Charles favoured the Catholics too much - after all, he was married to a Catholic’. The pupil would then underline the event with the correct colour from the key.

The pupils then produce their own snakes and ladders game using the information that they have learned. Again, this activity feeds into an assessment, and hopefully through play my pupils have gained some information they didn’t know or re-enforced what they already knew.

Some of you may remember The Wheel of Fortune. This quick fire quiz is loosely based on the 1980s television programme. I’ve downloaded the music and the opening titles from YouTube to make it much more like the original show. I used PowerPoints to produce this game as it allows me to loop slides over and over again and only when I press the backspace button the slides stop. 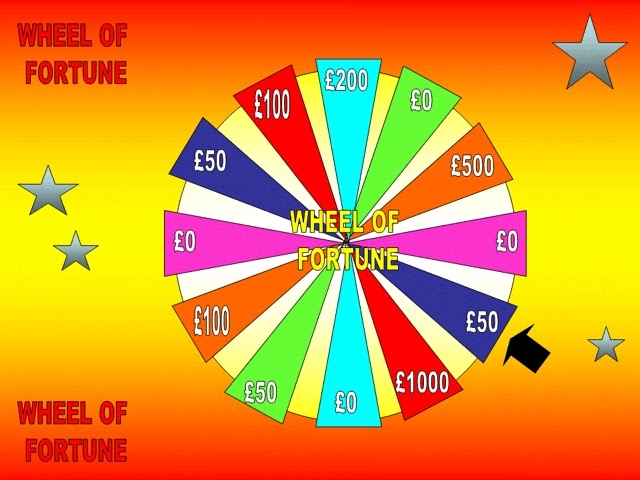 I’ve found this works well with small groups, particularly with my A Level students when we are revising a topic. The teacher needs to write out the question cards with key individuals or events on them. I then divide the pupils into mixed ability teams and they all choose a team name. I spin the ‘Wheel of Fortune’ and the pupil shouts out when they want me to stop the wheel. The pupil then comes to the front of the class and chooses one of the cards that are lying face down. If the pupil gets the answer correct they get the points that appear on the ‘Wheel of Fortune’. If they get it wrong, I allow the other team to steal the points. The team with the most points at the end of the session wins.

Chatterbox is a great little game that the pupils can make fairly quickly. It could be used as a plenary to a lesson or to help with revision. This simple task involves a piece of A4 paper, a pair of scissors, some colouring pencils and a bit of folding. The pupils need to come up with eight questions and answers which they write inside the Chatterbox. The pupils then take it in turns asking each other questions using the Chatterbox to generate the questioning. There are lots of video tutorials or websites (snapguide.com) that can help you create your own. The pupils really enjoyed making them. 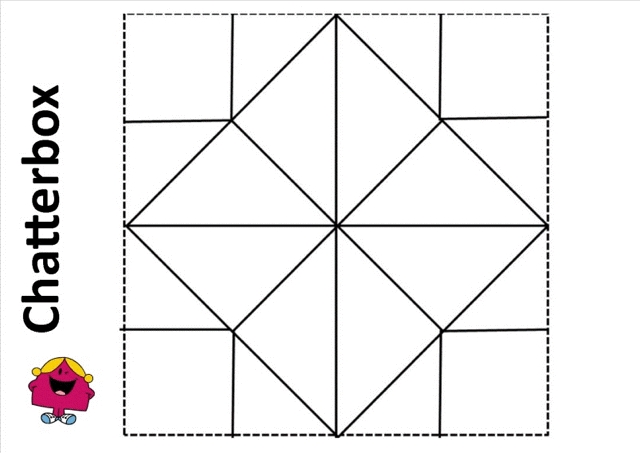 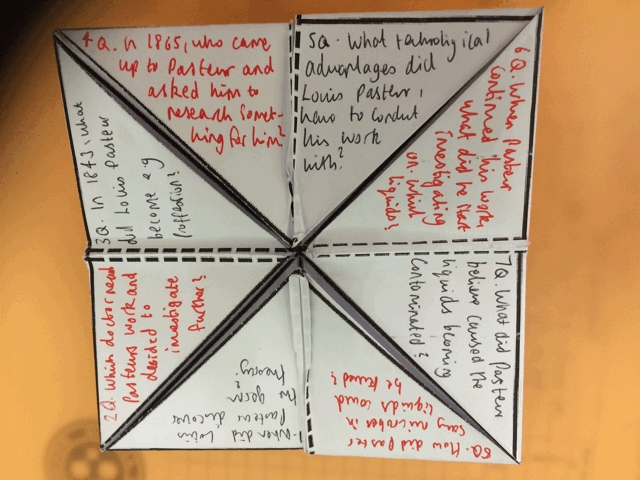 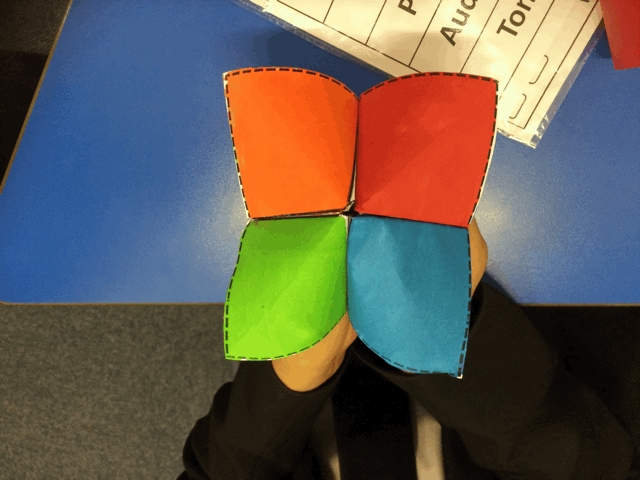 I know that, in an age of online games and social media, some of our pupils can demand ‘whistles and bells’, ‘flashing lights’ and in a word to be ‘entertained’, rather than wanting to learn for themselves. However, in an age of great change some of the most simple, but effective learning can occur through games based learning. Snakes and Ladders, Bingo and Top Trumps still have their place and are often the lessons where my pupils learn the most.

Do you use GBL in your chosen subject? Share your experiences below!

Register for free to continue reading
Registration is a free and easy way to support us.
When you register, you'll join a grassroots community where you can:
• Enjoy unlimited access to articles
• Get recommendations tailored to your interests
• Attend virtual events with our leading contributors
Register Now
Already got an account?
Login
Read 8199 times
Tweet