How I use project-based learning to engage my pupils

It has been suggested that in many cases student projects are little more than busy work, which fail to promote higher level thinking skills. Increasingly, however, new ways of thinking about project-based learning (PBL) are emerging. A great resource for PBL is the Buck Institute for Education (BIE). They suggest that there are eight essential elements for PBL, for example having open-ended projects that involve in-depth, real-world problems that are more meaningful and engaging for learners, and encouraging student voice and choice in which projects to do and how to approach them.

I would love to be able to spend more time developing PBL with my learners at Patumwan Demonstration School, Bangkok. However, in my school, as in many others, there are limitations of both time and the requirements of curriculum-driven outcomes, which can be obstacles for implementing effective PBL. Despite these limitations, we do have a number of long-term projects with which students are engaged. For example, our Grade 9 (Year 10) students do year-long integrated projects that incorporate Maths, English, Science, Social Studies, Health, and Art. Here, however, I will describe the Grade 11 (Year 12) science projects that I coordinate. I will outline the positive features that these projects offer learners, and also explore some of the challenges faced both by the learners themselves, as well as challenges faced by us, the teachers, as the project supervisors.

The science projects may focus on one science-specific subject; for example, a past project involved an investigation of factors that influence electrical resistance in different materials, and was essentially a physics project. Another project was biology-based, and looked at the antibacterial effects of different brands of toothpaste. Other projects may be more interdisciplinary - a number of past projects have investigated water quality, and encompassed various scientific disciplines, such as chemistry, biology, environmental science etc.

Students carry out the projects in small groups of four or five students per group. In the past I have selected the groups to ensure a range of abilities and a gender mix. This year, as part of an ongoing process aimed at improving the projects each year, I plan to let students self-select their groups to see if this has any noticeable effect on how they progress with their projects.

The projects run for the entire school year, during which time the students are responsible for carrying out their projects under the guidance of their supervisor. At the end of the first semester, the groups are asked to submit an interim written report. At the end of the second semester, students are required to give a ten-minute project presentation, followed by a question and answer session with the science teachers and students from the year below. In the first semester of their return as Grade 12 students they, are asked to produce a scientific conference-style poster based their projects.

One of the key features identified by BIE for effective PBL was student voice and choice. The science projects facilitate this, since students are able to come up with a project idea and research question of their own, or choose a project from a range of suggestions supplied by their science teachers. Previous examples of student-chosen projects have included an attempt to create a chlorophyll battery, and an investigation into which brand of diapers was most efficient. Student voice and choice will be further extended this year since, as mentioned already, the students will be able to choose their own groups. 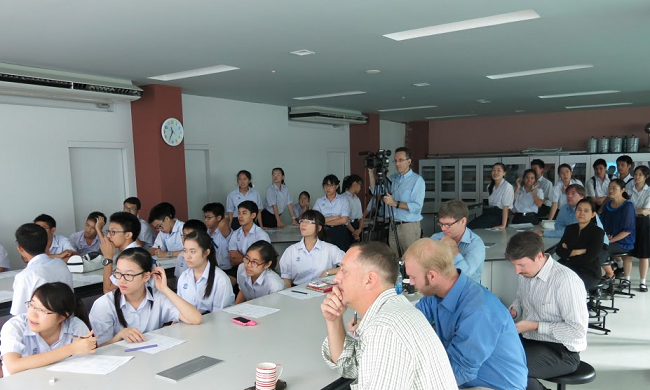 Students sometimes get the opportunity to engage with outside experts, another of the eight essential elements. For example, one group had a member whose sibling worked in a research lab, so they were able to access equipment and expertise not normally available in a high school lab. Finally, the projects offer great opportunities for collaboration, communication, and creativity, all key 21st century competencies.

The projects are open-ended, and often involve real-world problems, another of BIE’s eight essential elements. For example, a few years ago one group investigated water pollution in Bangkok canal water. If you’ve ever visited Bangkok you will know that some of the canal water is pretty horrible!

"Many of the students already have a number of extracurricular commitments, such as music classes and sports."

The group chose five spots around Bangkok that they felt were representative of the city’s canals. They then surveyed the water quality of these five locations over a period of months. The group used standard water quality parameters such as dissolved oxygen content, turbidity, and appearance. What was particularly interesting about this project was that it coincided with the major flooding that occurred in Bangkok during 2011. The group began their sampling prior to the beginning of the flood. They continued to sample during and after the flood. Their results showed that the canal water in all five locations was of very poor quality in the sampling period before the flooding. Following the floods they observed a dramatic increase in water quality based on the parameters they were measuring. A few weeks after the floods, the water quality began to decline once more. The group concluded that the improvement in water quality that they observed post-flooding was due to the massive dilution effect caused by the influx of huge volumes of water into the city’s canals.

So there we have the positives. What are the key challenges we face as teachers and learners involved in these projects? Well, as mentioned earlier, time and curriculum constraints are the main limiting factors for these projects. We have no class or lab time specifically dedicated to these projects. They are carried out during lunchtimes, after school, at the weekends, and over school holidays. Many of the students already have a number of extracurricular commitments, such as music classes, sports, and additional tutoring classes. Project supervisors can be available at lunchtime and after school, but only to a limited extent at weekends and over holidays. However, the value added by the projects for learners is, I feel, worth the extra investment in time and effort. Student feedback upon completion of the projects is generally positive, particularly in terms of the science they learned. They do, however, complain about the lack of time afforded for the projects throughout the school year, but as we have a pretty packed timetable there is little we can do about this.

At a recent STEM education conference in Bangkok, Karl Frearson, head of Science at Eton College in the UK, suggested that an effective way to motivate students was cash! So, when this year's project students gave their final presentations, I informed them that there were cash prizes on offer. The students in the year below attended the presentations to get some ideas for when they come to do the projects themselves. These students were asked to vote for their favourite project, and the winning group received a cash prize, in the form of book vouchers.

My students will go on to study a wide range of subjects at university, but obviously not all of them will stay in science. What I therefore hope they take away from these projects is not only a deeper understanding of science and science as a way of thinking, but also transferable, key 21st century skills such as critical thinking, collaboration, communication, and creativity.

Do you use project based learning in your school? Let us know in the comments.