How we’re using Minecraft to engage pupils in our school

Darren Currie is a History and Learning for Life and Work (LLW) teacher at St Joseph's Boys' School, a non-selective Catholic secondary school in Derry City. At St Joseph’s he was the school’s Special Educational Needs coordinator from 2003 to 2012 and currently occupies the post of careers coordinator. Darren has a keen interest in trying to develop a greater use of new technologies in the classroom to enhance the learning experiences of his students. He has recently established links with two Derry based STEM organisations, CultureTECH and The Nerve Centre, to support him in his endeavours.

Website: https://www.youtube.com/watch?v=kzEhEejARO4 Email This email address is being protected from spambots. You need JavaScript enabled to view it.

“Stop throwing snowballs at those pupils or I else I’m going to have to freeze you!”

When you enter the world of MinecraftEdu, be prepared to say some pretty surreal things to pupils during your lessons. I used the exact words above a few days ago during a lesson using Minecraft when a pupil went ’virtually’ off-task, had figured out how to procure snowballs, then promptly began a one man crusade against his classmates! Happily no major incident ensued and the situation was easily remedied. After a few clicks on the teacher control panel, said pupil was frozen out of the world for a few minutes, reprimanded and the class continued. There are risks in trying something new in teaching and MinecraftEdu is not any different in that regard.

I have been teaching for 17 years at St Joseph's Boys' School, Derry, a non-selective Catholic Post primary school of 900 pupils in the Creggan area of Derry City. The school fosters the ideal of ‘Achievement for all’, and through its curriculum policy aims to enhance the spiritual, moral, cultural, intellectual and physical development of pupils. I was the school's Special Educational Needs coordinator for nine years and teach History (KS3, 4 and 5) and Learning For Life and Work (KS3 and 4) while currently occupying the post of Careers, Education, Advice Information and Guidance (CEIAG) coordinator.

Our school participated in a MinecraftEdu training event as part of CultureTech week in September 2014. We were one of a limited number of schools to obtain a free license for the year, and we asked our IT department to nominate two IT teachers to take part in the training. At this point, I knew very little about the potential of Minecraft as a learning tool and I - without too much thought - believed that the software would be an 'ICT thing' and that it wouldn't be very useful to other subject department areas including my own. However, staff feedback from the training they attended was extremely positive, and it wasn't too long before we were planning on how to develop the use of the software to enhance learning in our classrooms.

We are currently at a very early developmental stage with a year 9 History project on the Plantation of Ulster, but already the pupils involved (a group of low to average ability students) are really enthused about using Minecraft as a learning tool. We have undertaken some preparation work during History class on the background to the Plantation, and have looked at some of the difficulties that English and Scottish settlers would have had arriving and then establishing settlements in Ulster. One area in particular the pupils wanted to look at was how the settlers defended themselves against the native Irish population. This traditionally would most likely have been taught via History textbooks or worksheets with (or without) audio/visual aids. Pupils would have been expected to draw and label various structures built by the planter population.

After a few informal discussions with the IT department I teamed up with an IT colleague, Cathal Hegarty, who was teaching the same class (and had previously been one of the staff trained in how to use MinecraftEdu in the classroom). We thought it would be a more interactive experience for the pupils if they could be given the opportunity to create a 3D replica of a 17th Century Plantation ‘strong house’ and Bawn using the MinecraftEdu software. We hope that this process will not only achieve the same subject specific learning outcomes but will also give the pupils the opportunity to develop ICT, Communication and Teamwork skills as a result of using the new software.

The project should develop along the following lines:

• The pupils will learn of the reason for the existence of Plantation Bawns in during 'normal' lesson time.

• The pupils will be furnished by the History Department with copies of architect plans and replica drawings of Salterstown Bawn and Brackfield Bawn - typical Ulster Plantation Bawns.

• The IT department and IT technician will ensure that MinecraftEdu software is uploaded to the appropriate server so that pupils can have full collaborative access to the ‘Group Building Areas World’ that we downloaded from ‘MinecraftEdu World Library’. The IT teacher will also use their IT lessons with the class to help complete the project.

• Pupils will be divided into teams then using the History department provided plans, drawings and teacher guidance, will be assigned various tasks within their groups and begin the process of building their Bawns using MinecraftEdu software.

The teams will be judged and assessed on the following criteria:

Pupils are very willing and eager to engage in tasks if they are interactive, challenging and fun, Minecraft ticks all of those boxes. The pupils are 'spawned' into a world where they are given a set of instructions and allowed to get on with the tasks that includes undertaking group work and developing communication skills. A huge bonus is that the teacher can set up various restrictions before, during or after their Minecraft lesson. Work can be saved at the end of a lesson and completed in another. We have taken print screens of the various stages of construction and will use them to display on notice boards in the classroom. This process is particularly well suited to kinaesthetic learning styles and has been very positively received by the pupils involved. 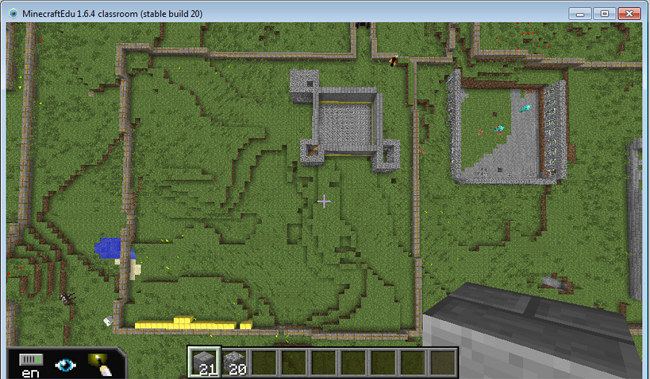 We are still trying to figure out many, many things! I am not a very technically-minded person (I can use a smartphone and get my head around most of the functions of Microsoft Office) but after working with the software for a short time I believe that we have only scratched the surface of how MinecraftEdu can be used fully as a teaching tool. I would love the opportunity for our school to avail of more MC training. Next time we would raise awareness of the benefits of Minecraft as a teaching tool to other subject areas and offer access to any future training to staff from other departments.

We have also encountered some issues using Minecraft on our C2Kni managed network. We’ve been able to work around the issues with a lot of support and patience from our IT team. The issues would need to be resolved as initial enthusiasm for developing projects may lead to frustration if using the software is not straightforward and requires an on-going dialogue with the IT department to facilitate use.

In the future, our plan is to roll out the Ulster Plantation project to the rest of the Year 9 and then next year expand the use of Minecraft to Year 8 for the building of Norman Castles. I would like to see funding for some bright spark to develop Minecraft worlds specifically for the Northern Ireland Curriculum. What pupil wouldn't love to use Minecraft to explore the inside of a volcano, or take a tour of the trenches in WWI? My own self-interest as a LLW teacher would be delighted to see a 'Stormont world' or 'Westminster world' where students could take a virtual tour of the Parliament buildings and undertake tasks designed to test their knowledge of the legislative system or meet their virtual MLA or MP! 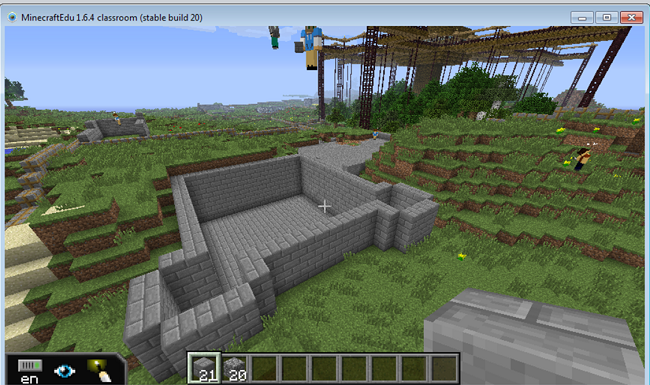 We have been using MinecraftEdu for several months now and are slowly but surely finding a way to use the software to assist with teaching and support learning in the classroom. We will continue to have moments when we may find ourselves saying “Virtual vandalism is not acceptable conduct in this lesson!” and “If you blow that wall up, you will be removed from the computer for 5 minutes!”

However, what outweighs the peril of exposing pupils to bizarre teacher reprimands and some initial technical teething problems is our witness to greater pupil motivation and enthusiasm for History lessons. Pupils, who have at times exhibited signs of disengagement, now want to discuss how their lesson has gone and what is going to happen next session - that’s what makes this process worth the effort and risk.

Do you use Minecraft in your school? Share your experiences below!