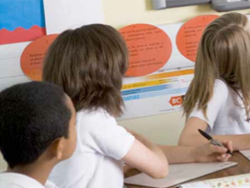 Moreover, the lack of a clear plan can lead to uncertainty and inconsistency. Having a predetermined set of consequences enables you to calmly, assertively and consistently deal with misbehaviour. It is a great stress-reliever.

Before we look at what those consequences should be, here are some key points about applying them.

Consequences should be proportionate. Overreacting to minor rule-breaking causes resentment and creates a negative atmosphere in your lessons.

Consequences should be known by the class in advance. A pupil who knows the penalty for breaking a rule but chooses to break it anyway has little ground for complaint, whereas you will seem unfair if you appear to be making up consequences on the spot. Ensure that the class knows the penalties for misbehaviour before you apply them, and keep them clearly displayed in the classroom.

Always start with the least intrusive intervention possible. If this works, you’ve dealt with the problem with minimum disruption to the lesson. If not, you can always move up to the next level.

Consequences must not be humiliating or degrading. There is no surer way to alienate a pupil than by humiliating him in front of his peers. Gain pupils’ respect by applying reasonable and fair punishments.

Avoid “whole class” punishments. Tempting as it may be to detain a whole class because a borrowed pencil is missing, don’t do it: it will alienate the innocent majority.

Do not threaten a punishment that you are unable to carry out. Doing so seriously undermines your credibility. “Throw another bit of paper out of that window and I’ll throw you after it!” Say this, and it’s quite likely that another bit of paper will go out of the window, just to see what happens. Then you’ll be forced to lose credibility - or your job.

Be consistent. This is perhaps the most important factor in any consequence system. For most pupils, the certainty of a consequence is more of a deterrent than its severity. An inconsistently applied punishment is a weak punishment. Some pupils may feel it’s worth pushing the boundaries if the consequences are uncertain. Moreover, if you apply different consequences to the same behaviour, pupils will see you as unfair and disorganised: a child who is given detention for an offence which was punished with a verbal warning in a previous lesson will feel aggrieved and you will appear unjust.

On a deeper level, children do not like uncertainty: it makes them feel insecure and unsafe. Applying punishments fairly, reasonably and consistently will help them feel secure.

Give warnings before significant punishments. One frequent result of there being no clear scale of consequences is that the teacher verbally admonishes a pupil several times, then snaps and gives a detention. The pupil, with some justification, feels aggrieved at what he sees as an unreasonable reaction. This can result in argument or confrontation. Had the teacher warned the pupil that his continued misbehaviour would lead to detention (rather than simply admonishing him for it), the misbehaviour might have stopped sooner.

This brings us to the consequences themselves. What options are open to teachers? If you are lucky enough to work in a school which has a clear, written behaviour policy, follow it. Many schools, however, tend to leave day-to-day discipline issues in the hands of teachers.

So, you’ve followed all the advice in my previous articles and established a temperate classroom climate in which misbehaviour is minimal. How should you respond when it does occur? Here’s my suggestion.

Step 1: Verbal Admonition - Make it clear to whom you are speaking, state clearly what he is doing wrong, and say what he needs to do to put it right: “David, you’re not listening to me. I need you to turn round and face me. Thank you.”

Step 2: Verbal Warning - If the misbehaviour continues, give a verbal warning and state what the next level of consequence will be: “David, this is the second time I have had to speak to you about turning round. If I have to speak to you again you will have to come and sit here.”

Step 3: Final Warning - Take the action warned of in Step 2 (in our example this would mean moving David to a seat near the front, but it could be something like writing the pupil’s name on the board or in your mark book). Clearly state the next level of consequence will be if the misbehaviour continues.

Step 4: Apply the Consequence - If the pupil continues to misbehave, apply the punishment you warned him of in Step 3. This could be spending break with the teacher, a phone call or letter to the pupil’s parents, or even detention after school.

Parent contact is a particularly powerful tool, but whichever option is chosen, the most important factor in its effectiveness is certainty of delivery: if you say you’re going to do something, you must do it.

This suggested scale of response is not intended for dealing with extreme misbehaviour such as violence, threats of violence, swearing at the teacher, open defiance or repeated lesson disruption. In such cases, the pupil should be removed from the classroom as soon as possible (this is simply to enable the lesson to proceed: further action should follow). Every school should have a clear system for dealing with extreme misbehaviour as part of its published behaviour policy.

Another problem is the failure of pupils to comply with punishments: for example, a pupil is told to come back at lunchtime but chooses not to. It is my firm belief that it is not up to the class teacher to pursue this further. Defiance of the detention system is defiance of the head teacher’s authority and should be dealt with accordingly.

Inexperienced teachers can find it difficult to know where to draw the line between mischief and serious misbehaviour. Some tolerate levels of bad language or insolence that go beyond what more experienced teachers would consider acceptable. My advice is simply this: if it feels wrong or makes you feel uncomfortable, then it is wrong; do not tolerate it.