Vicki works at mobile ICT security, charging and storage expert LapSafe® Products, the company behind the UK’s first ever laptop trolley. LapSafe® Products has been a trusted brand within the education sector for more than a decade, providing superior solutions to track, manage, store and charge laptops, netbooks and tablets since 2000. LapSafe® Products pioneered the industry it now leads and manufactures the most comprehensive range of charging products on the market. Recent products include: the UnoCart™ sync and charge for iPads, the ClassBuddy™ quality low-cost laptop trolley and the RFID Diplomat™ laptop locker.

Website: www.lapsafe.com Email This email address is being protected from spambots. You need JavaScript enabled to view it. 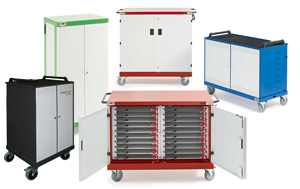 According to the latest ICT Provision and Use in Schools report by the British Educational Suppliers Association (BESA), the average UK secondary school has around 86 laptops. Even more extraordinarily, the same report holds that, of the 2.5 million computers currently used by pupils in UK schools, the majority of them are laptops.

With so many schools favouring portable computers, laptop storage and charging trolleys are now commonplace in our classroom, providing teachers will a fully mobile ICT suite that can be wheeled between rooms of pupils. Unfortunately, with the rise in popularity of laptop trolleys comes an entire field of associated jargon, making it very difficult to decide which laptop trolley best meets a school’s needs. To make things even more complicated, different manufacturers can often mean different things when they use a particular term.

To help make your decision a little easier, I thought I’d run through some of the most common, and most confusing, phrases, to provide some clarity.

For some reason, soft-start, also known as load-protection, has been called many different things by manufacturers of laptop trolleys. However, no matter what the name, the functionality is the same.

Soft-start (not to be confused with surge protection) is a system to prevent power surging to all of the laptops at once when the laptop trolley is switched on. As a result, soft-start is designed to prevent a laptop trolley tripping a building’s fuses and is a must-have standard safety feature to look out for.

This phrase can cause a lot of confusion for schools because almost every manufacturer of laptop trolleys means something different when they use it. Power management normally refers to the way in which the electricity that charges the laptops is controlled inside the cabinet and is perhaps the most important thing to consider because it can impact upon pupil safety and the battery life of your laptops. Some laptop trolleys use a timer as a simplistic way of managing power inside the trolley, with other laptop trolleys using more sophisticated systems that detect exactly when a laptop has finished charging, and then turn it into standby mode.

Surge protection, or in-rush surge protection, is different to soft-start, but is another way to deal with something called ‘in-rush current’. If there is a surge, or sudden rush of electricity, caused by a lightning strike or a switch at the National Grid, surge protection absorbs the electricity to protect fuses being tripped. This safety feature also protects the laptops inside the laptop trolley from any damage that a surge could cause.

Mains conditioning filters the electricity to handle electrical spikes and smaller upsets in the electrical supply. Probably the best examples of mains conditioning are when a fridge turns itself on or off and causes a small fluctuation in the building’s electrical circuit, or when a light switch makes a ‘pop’ sound when it is turned on. Again, this is another vital requirement for laptop trolleys to protect the laptops themselves. Also filtering is essential to ensure the cabinet meets Electro Magnetic Compatibility (EMC) directives.

The term refers to the voltage that appears at the plug pins, for a short period of time when a plug is removed from the power socket. Residual voltage protection does not allow any residual voltage to escape from the laptop trolley once it is switched off, which could cause an electrical shock.

I hope that the above explanations take some of the confusion out of your search for a laptop trolley and makes things a little easier for your school.

Check out Innovate My School's Laptop Storage & Charging directory for a range of solutions on the market.