What is "Big" History? For me, it’s anything that captures the imagination, enthuses or even sparks inspiration for students in a History lesson. More so, when I think "big", I think outlandish, memorable and relevant. I've done all of these in various shapes or forms;they have worked well, and I’d love to hear yours too (please comment at the foot of the article!).

This lesson can be placed at the beginning of an historical enquiry, and engrosses the students from the word ‘go’. As they enter the room, there should be ‘warning’ tape from wall-to-wall, placed around the silhouette of a dead body (you could also use black sugar paper). Students are told that this person has been the victim of a murder. In teams, students are then told that they are detectives and need to work out what happened. 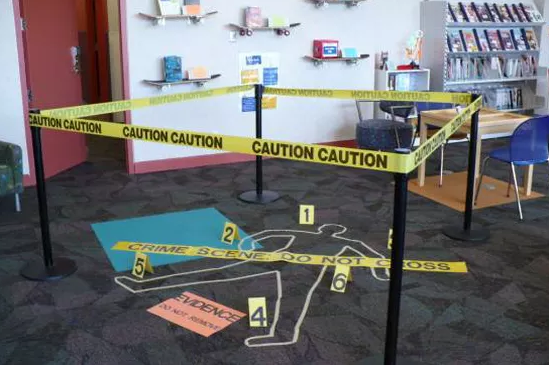 STEP 1 – Students need to come up with a list of all the things they would do first (check CCTV, door to door search etc).

STEP 2 – Explain to students that the year is 1888. Ask them to now eliminate those things that they could not do at this time.

STEP 3 – On their list, “As they enter the room, there should be ‘warning’ tape from wall-to-wall.”they will probably have “interview a witness”. They should come up with the list of questions. You can take on the role of witness, PC Joseph Andrews (Police helmet works here)! Use this original witness statement and prepare to hotseat answers:

Police Constable Joseph Allen, 423 H, deposed: Last night I was in Castle Alley. It was then 20 minutes past 12 when I passed through. I was through the alley several times. I remained there for five minutes. I entered the alley through the archway in Whitechapel Road. I had something to eat under the lamp where the deceased was found. Having remained in the alley for five minutes, I went into Wentworth Street. There was neither man nor woman there. There were wagons in the alley - two right underneath the lamp.

Coroner: Would you swear there was no one in the wagons? - I would not swear to that, as I did not look into them; one of the wagons was an open one. Everything was very quiet at the time. The backs of some of the houses in Newcastle Street faced the alley, and in some of the upper windows were lights. That was not an unusual thing at that time. I cannot say if any of the windows were open. No sounds came from those houses. On leaving the alley I met Constable Walter Andrews, 272 H, in Wentworth Street. It was about 100 yards from the alley where I met Andrews. I spoke to Andrews, who then went towards Goldston Street.

[Coroner] How did you fix the time?

PC Joseph Allen: I looked at my watch. It was 12:30 when I left the alley. At the end is a public house - the Three Crowns - and as I passed the landlord was shutting up the house. After leaving Andrews I went towards Commercial Street and met Sergeant Badlam, 31 H, who told me a woman had been found murdered in Castle Alley, and he directed me to go to the station. When the sergeant spoke to me it was five minutes to 1, and 1 o'clock when I got to the station.

STEP 4 – Ask one student to volunteer as an original witness. Earlier in the day, ask a Year 7 (or a student in a year group unknown to those students) to shout something random at some of the Year 9s at break time and then run off (nothing offensive, obviously!), but make sure that they at least glimpse “This was a real technique used by the Ripper Police.”the Year 7’s face. In the lesson, ask five Year 7s to appear in an identity parade. They need to select who they think it was in groups (or just the students who witnessed it – if you get the year 7 to do this during your lesson – perhaps delivering a note, then this could also work because then all students can be involved). Try to select four Year 7s who look relatively similar to the one who interrupted/shouted. Of course, they will probably get it wrong. This was a real technique used by the Ripper Police, but the murders all took place in the dark, and the person who saw him was drunk!

Create two barricades using your desks by placing them on the floor. Create ‘No Man’s Land’ in between. Turn all the lights out and then play the sound effects of war. Ask students to imagine how they would feel and to contrast that with what they were told this war would be like when they joined up for it.

Now, take your class outside. Get them to stand in a line. Face them from 500 metres away. Blow a whistle to replicate the “going over the top” signal that was given in WW1. Ask students to start walking towards you: they must only walk but can stride!

Having explained that a Vickers machine gun can fire 400 rounds per minute and predicting that at least 75% of the bullets will miss their intended targets, shout out two random numbers per second. The student whose number it is will sit down immediately. Within 30 seconds the whole class will be sat down.

Explain that soldiers were ordered to walk at the start of WW1 battles with bayonets attached. Now explain that the training soldiers received was very limited too. Use football corner flags (if you can borrow some from PE) and ask students to hold them up on the field in random locations. The activity must be conducted in complete silence (this is really what the officers had to do in training). They simply need to cross the field while avoiding the white flags which are bombs going off! Students will find this laughable, and you can then emphasise how “laughable” the training was compared to what they would actually face.

The power of Skype is sometimes an easy one to overlook. You can conduct an interview with someone who experienced any event at anytime from anywhere in the world and students can interact. Just to name a few examples – a Holocaust survivor (or relative of survivor) or a Black American who lived through the civil rights era in the Deep South. As there are quite a number of these people still alive and available, this is a unique opportunity to bring History alive too!

Students can prepare a list of questions in advance of the interview. I recently did this with the education team at Warwick Castle as they played the roles of historical characters. It worked really well.

What do you think of these tactics? Sound off below.