Teaching the right work with Stretch and Challenge

Laura is a music specialist and is currently curriculum leader for performing arts at Belmont Community School in Durham. She will also be Project Based Learning leader from September, something she believes very passionate about. She is mum to a very active 2 year old and loves running and stewards at Durham Cathedral in her spare time.

Website: mrsjacksonmusic.wordpress.com Email This email address is being protected from spambots. You need JavaScript enabled to view it.

Back in September 2011, I began the academic year full of gusto. I had re-planned schemes of work, made some lovely new resources and prepared exciting performing and listening tasks. After several weeks into the term, I realised something wasn’t quite right. Work from some students hadn’t been done particularly well, feedback was becoming more lengthy and wordy, and the weaker students were continuing to make the same mistakes. I needed to rethink how I was teaching the struggling students.

I used some of my free time to visit one of our feeder schools to watch how they taught the weaker students, but also how they differentiated the work, as this was essentially the problem; we had students coming to us with low reading ages and were unable to access the curriculum, but in order to prepare appropriate work, I needed to know what 6/7/8 year olds were supposed to be able to access. I had trained in secondary education so had no real idea what these reading ages meant.

I found the work in the primary school exciting, eye opening and really helped me to focus on preparing a variety of differentiated tasks for all disciplines in music. I also shared the resources with other members of my department, as it had become important to me that we didn’t let these students down. By this point it had become more to me than trying to save time marking; it was about the students and making sure they were able to understand, complete the tasks and also make improvements to their work.

In November 2013, I attended a TeachMeet at Walbottle Campus, Newcastle and had a lightbulb moment when listening to Cherry Crooks presenting about Stretch and Challenge. It was this picture which struck me hard (via Tom Sherrington). 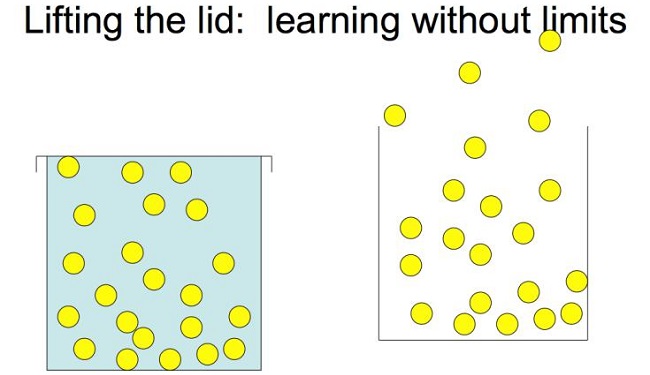 It made me really think about who I was aiming my lessons at, and who I was letting down. I had sorted out my differentiation, made sure students could access and were making improvements, but where was the stretch? The challenge? Despite preparing a variety of tasks, I was now letting down the top end; the most able, those who need the hardest, grittiest, tough tasks to help them improve and really push them further. I had become so preoccupied making sure the weakest students were catered for, I had taken my eye of the top end.

Straight away I decided to use tasks rather than ‘levels’. I discussed this with students, and the feedback they gave me told me they didn’t like levels, they had a stigma attached to them; a lid put on their achievement and a barrier to improvement. A number too high was too hard and frustrating to try to achieve, a number too low amongst peers was seen as not being clever enough so therefore, no effort was needed.

I decided to give students a variety of tasks, both in class and as homework after reading Graham Nuthall’s The Hidden Lives of Learners. In the book, he discusses the fact that the most able students are the most likely to know most (up to 50%) of the material covered in a topic and they are least reliant on teacher information, unlike the least able who are most reliant on the teacher as a source of information. I found this startling, but also believable when I thought of my most able students.

I also decided to include dedicated improvement reflection time (DIRT) time into listening tasks. I felt that this was possibly a risky move in music, particularly at a time where OFSTED was heavily criticising music for not being taught “musically”, but it was important to me to embed the qualities I believed would help students in other areas. Not just mine, but also to cement the skills I wanted them to have as listeners; to appreciate the music they choose to listen to, to justify beautifully how the music makes them feel and understand why, to listen to music like musicians.

After reading An Ethic of Excellence by Ron Berger, it made me realise that as well as using DIRT time to critique and improve work, the students have to believe in the work and, most of all, themselves. If they feel that their learning community is safe, stable, friendly and secure, then they will feel safe enough to share their work, take on board and use the critique they are given and in turn will reap the rewards of their learning community and take pride in their work.

I was conscious that this was not to be a “quick fix”. I wanted it to become a way of life, to embed and develop a culture of excellence where students are hungry to learn, are motivated by the desire to learn and motivated by what they learn and achieve.

My first steps were to break ‘levels’ down into tasks and colour-code them. I also decided to take away the safety net I had provided for the least able and weakest students. Whilst completing my department data analysis, some of these students had remained static and I needed to gently push them in the right direction too. By shifting the focus on the top end, preparing the grittiest tasks for the most able, it meant I could also instil a sense of self-confidence and belief into these static low achievers too. I introduced “takeaway homework” (magpied from Ross McGill’s 100 Ideas for Secondary Teachers book) that allowed student choice and that was also highly differentiated and catered for different student abilities and interests.

I developed critique in Y7 and Y9 lessons gradually then throughout both KS’s, tweaking each time to improve, learning from each class I worked with. By the time I had the next data capture, the results were impressive but I wasn’t satisfied by the new set of numbers. What did satisfy me was the work that had been produced; the skills that had been developed and the belief students were beginning to have. They were proud of themselves, proud of their achievements and proud of each other.

I had students writing fluent analysis of pieces of music they had listening to, students performing on the keyboard using melody and chords, hands together, students developing their vocal repertoire and becoming increasingly confident about classroom performances. The weaker students were motivated by the excellent role models and understood the need for effort, belief and determination to overcome difficulties. The more they achieved, the more they wanted to achieve and this was the key. I had a whole wall of homework displays that students had done, and by displaying the range and variety of homework, it again made students proud of each other. Our learning community was developing a lovely, nurturing but high-performing atmosphere.

By the end of the current academic year, Y7 were completing work that Y9 had been doing earlier in the year. The work was not easy; indeed, it had been challenging for Y9 in the first term, but we had gone beyond that now. Some students still needed some extra support but they weren’t afraid to ask for it. Students would collect their vocabulary help sheets if they needed one (without being reminded), they used full sentences with beautiful musical language, justifying their decisions, answers and opinions without being prompted. They were completing the most challenging tasks in performance tasks, performing with more confidence and belief. This is exactly what I wanted to achieve at the start of the year.

This all sounds great and rosy, but I know there is still much work to be done - there always will be, it will never be finished.

During the last few weeks we have been developing our new curriculum without levels. I have been so excited and privileged to lead these changes within the Performing Arts department as the Curriculum Leader. We have planned challenging and exciting work, and have linked music, dance and drama together to create projects, rather than topics or units of work, discrete in each subject.

It was important to me as the Curriculum Leader that my department works together united, rather than fragmented and separately. We have looked at A level and GCSE work for what we will require as ‘Beyond’ and ‘Excellence’, and have set thresholds for what we want to see and want students to be able to do and create. I want to create real-life projects with value and integrity to heighten the experiences of our students further and this is something that will take time to develop and embed. I am extremely excited and honoured to be the Project Based Learning lead in our school, and look forward to all that I will learn in this role, to benefit our students.

We still have a lot to do as a department, and a lot to do as individual teachers.However, I know the work will be worth it; nevermind lift the lid, it will blow the lid off completely.

Have you used similar methods in the classroom? Let us know in the comments.

Register for free to continue reading
Registration is a free and easy way to support us.
When you register, you'll join a grassroots community where you can:
• Enjoy unlimited access to articles
• Get recommendations tailored to your interests
• Attend virtual events with our leading contributors
Register Now
Already got an account?
Login
Read 5614 times
Tweet