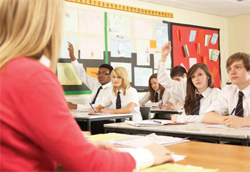 Offer choices. You notice that Adele, on the back row, has her make-up out during the lesson. Rather than insist that it be handed over to you - risking an argument and extending the time it takes to deal with the situation - say to her : “Back in your bag or on my desk, Adele - your choice”. This is a win-win solution: Adele doesn’t lose face (she feels she has made a choice rather than obeyed a command), and the distraction is gone, allowing you to get on with teaching. It is also worth adding the warning, “If I see it again, it’s going on my desk until the end of the lesson”: most pupils will readily accept such a deal - and in the event that make-up does reappear, it’s much easier to confiscate it if you’ve warned that this will happen.

Use partial agreement. This is a useful way to beat the “It wasn’t only me” argument. For example, you see Anthony chatting instead of working. You ask him to get back on task. “But so-and-so was talking as well,” he replies. Rather than argue with him, just say “that may be true, but you are the one I saw”. By partially agreeing with Anthony, you make him less likely to argue back.This approach is also useful in quelling minor classroom squabbles: Pupil: “Sir, Darren keeps looking at me funny.” Teacher: “That may be true, but I need you to get on with your work now.”

Use positive correction. It is very easy to slip into “moaning” mode: to constantly pick up on bad behaviour. A more effective strategy is to promote the behaviour you do want. All this requires, in many instances, is replacing “Don’t do that” with “Do this”. For example, you see Melville staring out of the window instead of listening. Rather than saying “Mel, stop looking out of the window”, say “Mel, look at me, thank you”. The two statements amount to the same thing, but by being more positive you make confrontation less likely. (Also note the use of “thank you” rather than “please”; the latter implies that you would like compliance with the instruction, the former that you expect it.)

The “what-what” technique: This is useful for getting pupils who have been distracted to resume working. For example, you see Amy staring into space when she should be writing: Teacher: “Amy, what are you doing?” Amy: “Um, nothing.” Teacher: “What should you be doing?” Amy: “Um, writing.” Teacher: “Thank you.” This technique can also be used to provide positive rule reminders – eg, “Susan, what are our rules on talking?”

The “when-then” technique: For example, “Aleem, when you stop shouting out the answers and put your hand up, then I will listen to you”. This tip is useful because it reinforces the desired behaviour - rather than just focusing on what the pupil has done wrong.

Allow “take-up” time. Pupils are far more likely to obey rules when they feel they have chosen to comply than when they have been forced to. A typical face-saving strategy for pupils is to delay compliance with an instruction for a short while. Allow them that. It allows them to comply without losing face. Issuing ultimatums and demanding immediate compliance is more likely to prolong the disruption and provoke confrontation.

Following these simple techniques should help you to maintain a positive, constructive and collaborative atmosphere in the classroom, and to manage behaviour effectively without shouting or resorting to unduly coercive methods.