Top tips for bringing the Maker Movement to YOUR school

P. Matthew Dillon began teaching in 1986, after completing a MA in Curriculum and Teaching Childhood and Elementary Education from Columbia University-Teachers College. He has taught kindergarten through fifth grade self-contained classes in public schools in New York and Texas. Moving to Hawaii in 2010, Dillon worked at a private school as the elementary science coordinator/teacher and the K-5 Engineering & Design Teacher. In 2014, Matthew became the first Lower School STEM/Makerspace teacher at ‘Iolani School, in Honolulu, Hawaii.

He has spoken about makerspaces and maker education at FETC, Stanford University's FabLearn, Schools of the Future (HI), and the NSTA STEM Forum. He also presented at ATLIS, the Hawaii STEM Conference and ‘Iolani’s Ignite Innovation. In addition to presenting, Matthew has run various professional development sessions for both private and public schools in Hawaii.

Website: iolanik-6fablab.blogspot.com/ Email This email address is being protected from spambots. You need JavaScript enabled to view it.

Have you heard people talking about “making” in schools, or “makerspaces”, or “maker education”? What about 3D printers, squishy circuits or arduinos? The idea of making to learn is a philosophy of education that goes back to the late 1800s/early 1900s and the writings of John Dewey. “Give the pupils something to do, not something to learn; and the doing is of such a nature as to demand thinking; learning naturally results.”

Fast forward to the early 2000s… originally published in 2013, Invent To Learn: Making, Tinkering, and Engineering in the Classroom by Gary S. Stager and Sylvia Libow Martinez is considered by many to be the “bible” for maker education. “Students engaged in direct experience with materials, unforeseen obstacles, and serendipitous discoveries may result in understanding never anticipated by the teacher.” Making in education was becoming “popular” with the ever increasing accessibility of computers in schools (and tablet computers), the affordability of 3D printers and the new interest in coding. 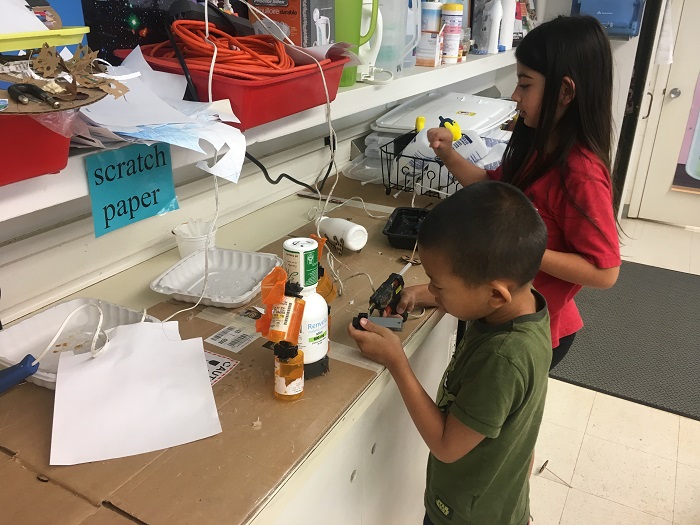 In 2013, ‘Iolani School opened up a new building, the Sullivan Center for Innovation and Leadership. This building contains classrooms, our library, meeting rooms, open/flexible space but it also has a large, well equipped makerspace, computer labs, and robotics/electronics lab. Upper school students are given the chance to take electives in Design and Fabrication, Robotics, Computer Science, Video Game Design, App Design, and so on. But this was just for our seventh through 12 graders. So the decision was made to bring this same type of learning to the lower grades.

In 2014, a lower school (kindergarten through sixth grade) makerspace opened with the goal of increasing the instruction and exposure time students would have to the concepts related to Science, technology, Engineering and Maths (STEM). But also giving them hands-on access to all sorts of materials and technologies that they could use in their learning. With the educational trends of ‘project-based learning’ and ‘design thinking’ becoming the thing to do in school, having an area in the classroom or, even better, a dedicated ‘makerspace’ would make sense. 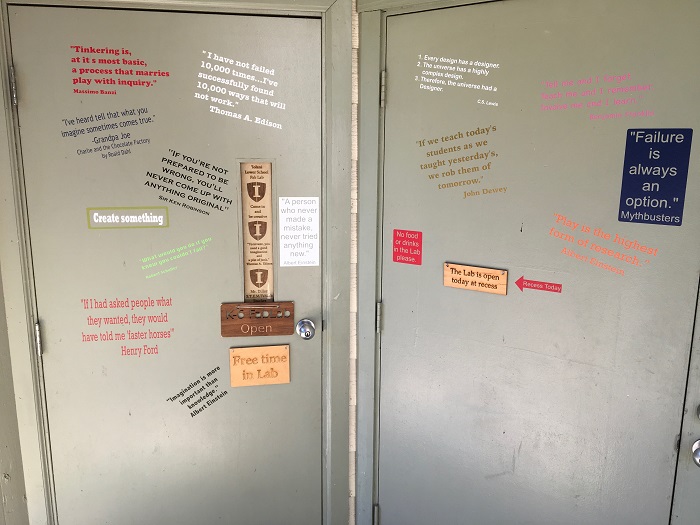 ‘Iolani set aside a room that would be renovated and stocked with all the latest technology. We have 3D printers, a laser cutter, a CNC mill, a vinyl cutter, various circuit boards (MakeyMakey, arduino, Raspberry Pi), tools, electrical components, and of course, cardboard, tape, glue, scissors, etc. But this was just means and the material for making. The most important thing is the “why” we make. 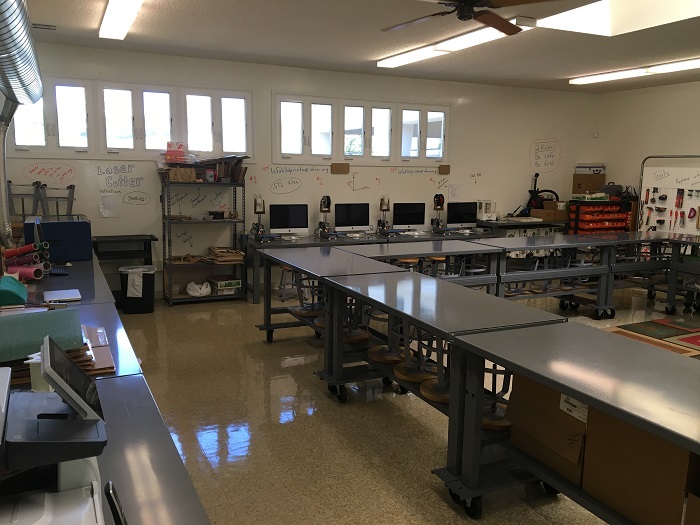 At its very essence, making in school is an attitude, a mindset, a culture. It’s a process, a journey: where learning is personal and unique. Where work is real and meaningful; where there is an audience and reason for what is made. These are reasons we do what we do.

So how do we take what is “required” learning and have students “make” to learn? Here are a few examples:

First grade fictional rainforest creatures: As part of the rainforest unit, these students worked in groups to create a fictional creature that lives in one of the layers of the rainforest. Using design thinking they imagine, plan, create and improve this creature. The teachers also enlisted the help of our high school Biology class. The first graders shared their ideas for the creature and the high school kids gave them feedback about how "real" their animal was. The students then came to the Lab to create their creature using recycled material. We first gave them a lesson on connecting materials (tabs, flanges, slots, etc) and then they followed their plan and made their animal. 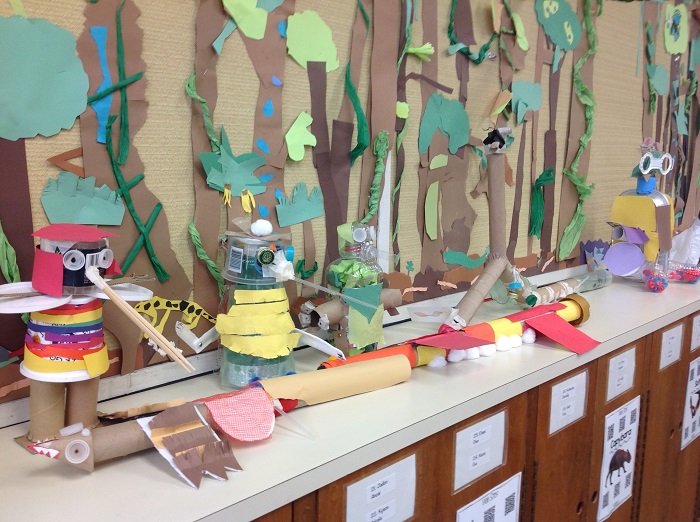 Third grade desk caddies: As part of a design thinking activity, our third graders had to solve the problem of not having a place to put their supplies (pencils, markers, erasers, etc). They solved the problem by designing and building desk caddies. This involved making drawings and then prototypes cut out of cardboard. Next they wrote out their plan and included a labeled diagram of their caddie. They transferred the design to the computer and then to the laser cutter the pieces. Finally, the students glued them together and put them on their desks. 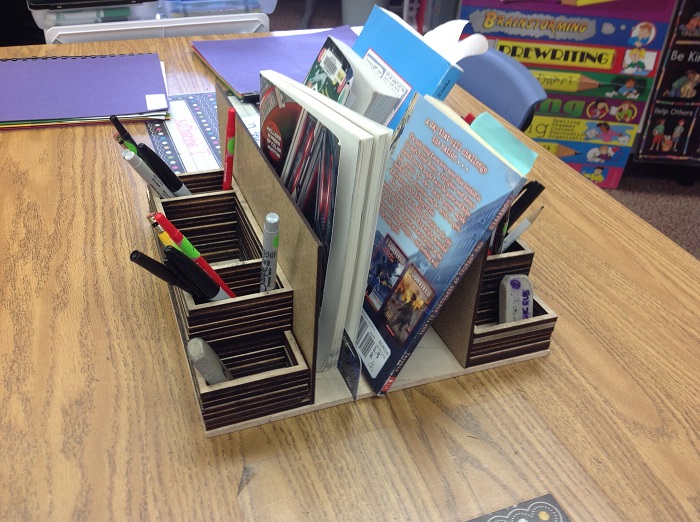 Sixth grade Ancient Egyptian artifacts: During the sixth grade year, students learn about ancient cultures. One of these units was on ancient Egypt. Students were challenged to research and create an artifact before giving a report on it. Given the option of using the Lab, a number of students came in and made a variety of things. 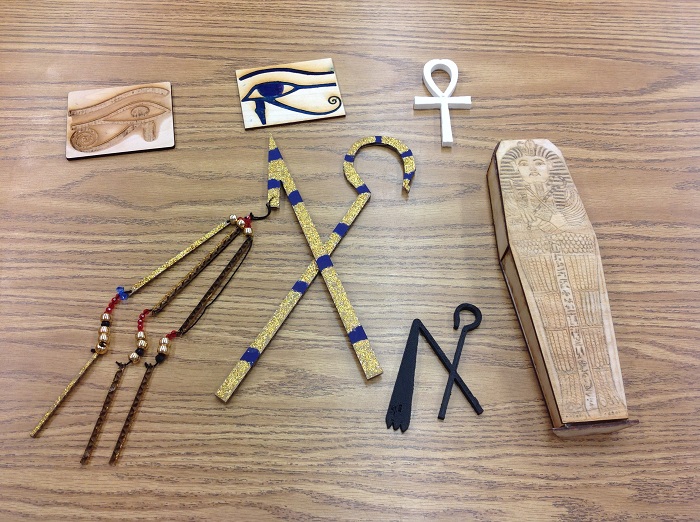 We also offer "mini-sessions" for each grade...one time a year for a 90 minute period. The topics are based on each classes curriculum and what tools or techniques are appropriate for each grade level. Doing this, our students will gain the skills and techniques needed for any project they choose...not only in grades K-6, but when they go on to the Upper School and the Sullivan Center.

Examples from ‘Iolani School of what Upper School Students can do:

(All of these can be found at: inventtolearn.com/cmk-press)

Register for free to continue reading
Registration is a free and easy way to support us.
When you register, you'll join a grassroots community where you can:
• Enjoy unlimited access to articles
• Get recommendations tailored to your interests
• Attend virtual events with our leading contributors
Register Now
Already got an account?
Login
Read 8273 times
Tweet