Ian has always been fascinated by the power of sound and, from an early age, started working on sound production with a number of local drama groups. After leaving school, he worked in BBC Radio as a sound engineer before forming his own mobile recording business; during this period he designed the sound for a number of provincial theatre productions.

Ian's second love is computers and these two strands came together in the form of OmniBus Systems, a company he founded to develop computer automation systems for TV and radio stations. These software systems are now used to run TV stations around the world, including the BBC, and in 2000 OmniBus Systems was awarded the Queen’s Award for Innovation.

Ian retains his passion for the theatre and regularly helps out with sound production and design for school performances. He recently developed FX Live, a software application for the iPad, which he hopes will allow pupils and staff to improve the quality of their sound design in school productions. 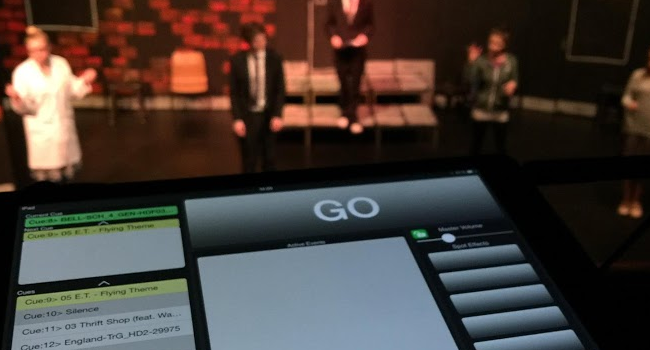 "With no changes to the set, the use of two different soundscapes made it easy to give subtle cues to the audience."

Traditionally, within many school productions sound has been an afterthought, perhaps reduced to a few tracks of music or sound effects played in from a CD player or computer playlist and, with the tools available to professional theatres costing hundreds of pounds, very few schools have been able to improve on this.

However, with the advent of the iPad and the availability of sophisticated software packages for applications such as theatre sound, this is no longer the case. These tools allow the easy scheduling of quite complex sound sequences and have the ability to play multiple sound cues simultaneously, so it becomes a relatively easy task to keep sound running throughout all of the scenes in a performance.

So what is a soundscape, and how do you go about designing one? The first and most important point is that it needs to be subtle. Audiences should not really be aware that it is there. I like to say a good soundscape should be seen and not heard. By that I mean that your subconscious hears the sounds and creates an image in your mind; you should not be consciously aware of it and it should certainly not distract from the dialogue on stage.

Because many school productions are done with minimalist sets and, in some cases, no set at all, a good soundscape can go a long way towards helping to create an environment in the minds of the audience and, to a certain extent, it can even help the cast.

A good example of this is a production I recently worked on which took place in two different schools. One was an inner city comprehensive and the other an up-market private school set in the countryside. With no changes to the set, the use of two different soundscapes made it easy to give subtle cues to the audience as to where a particular scene was taking place. For the inner city comprehensive this involved distant traffic, the occasional car alarm and police siren, whereas the private school soundscape featured birds, distant sheep and the sound of a choir singing as if drifting across the quadrangle.

You will not always find ready-made soundscapes on sound effects CDs or online libraries. It's more a case of putting elements together yourself to create the correct impression. But it can be a good exercise for the class as a whole to think about what those sounds might be.

It's also great fun to go out and record your own elements to create a soundscape as, again, this is now very easy using just a smartphone. This is especially true if you want to add any human voices into your soundscape. The Hollywood term for this is “Walla” and it consists of almost inaudible words or chatter appropriate to the environment. Again, this is a great group exercise. In the UK it is called “rhubarb”, which stemmed from the fact that repeating the words “rhubarb… rhubarb” in a crowd scene would produce suitably indistinct chatter. The film buffs amongst you may remember that Eric Sykes took this concept to its ultimate conclusion by making a film called Rhubarb that consisted of no dialogue whatsoever, just the cast saying “rhubarb” in the correct intonation throughout the movie.

Last winter I was involved in creating the sound for a production of A Christmas Carol, and that involved a number of soundscapes. The most complex was recreating the general hubbub of early 20th century London. The class was encouraged to research and think about the elements that would make up that soundscape and the final mix included some of the following elements:

When mixed together and played at different levels, depending on whether the scene was indoors or outdoors, this successfully created the impression of being in a busy, bustling London street and everyone had a lot of fun putting it together.

Even scenes that you would think would be silent, such as Scrooge's house, had strange wooden creaks and groans that seemed to bring the house to life, and this all added to the suspense. Quite often you can use the same soundscape in a number of different ways by mixing it differently. So, for the night-time scenes in London, we removed a lot of the chatter and traffic and replaced it with the occasional drunken shout and distant dog barks.

A distant dog is not a quiet dog!

One of the more interesting aspects of sound design that the examples above illustrate is that it’s not just about selecting the correct sound, but placing it in the correct 'perspective' in the soundscape. And the digital technology we now have at our fingertips makes this much easier once you grasp a few basic principles about how sound behaves.

There are three main things that can be adjusted on a sound to change its perspective: the EQ (tone), reverb and echo.

Let's take a look at each of these in turn:

"Sound is reflected off hard surfaces and all of these reflections arrive at our ears at slightly different times to create an effect known as reverb."

Equalisation, or EQ for short, is the tonal quality of the sound and this changes with distance. High frequency sounds are very directional and so don't travel far, whereas mid and lower frequencies do. So the first thing you would do to make something sound distant is to remove some of the high frequencies. This is also true if there is a physical obstacle between you and the sound. So, for example, a scene that takes place in a New York apartment would have a different traffic sound depending on whether the windows were open or closed. This is very subtle, but if you lift the high frequencies of the traffic sound when the door to the outside world is open and then remove them again when it's shut, you will be amazed at how natural it sounds.

So the first thing we need to do to make our dog sound distant is remove some of the higher frequencies.

The next thing we need to think about is the 'space' in which the dog is barking. If it's a completely flat field, then just removing the high frequencies is enough. But if it's, say, in a wood then it would sound very different. Sound is reflected off hard surfaces and all of these reflections arrive at our ears at slightly different times to create an effect known as reverb. Think church or lift shaft. But reverb is present in all rooms where there are any hard surfaces - the delay times are just shorter. That's why you sound so good when you sing in the bathroom.

Reverb is not just indoors. A dog in a wood would sound different from a dog in a street, but they would both have reverb. Trees reflect sound and that means a lot of surfaces to reflect off, all at different distances. You would be amazed at the difference even a few milliseconds of reverb can make to an effect to make it sound like it's in a real space rather than just a dry studio.

The final element is echo, and this can be used by itself or with reverb. Again, it should be used sparingly, but our dog in the field might have a single or possibly multiple echoes bouncing back quietly off the surrounding hills.

If all this sounds complicated then the best thing to do is simply experiment and see what works. The fact that all these variations of a dog barking can be created just by tweaking a few settings in an iPad app is something that would have been unthinkable a few years ago, and you will soon learn to recognise when something sounds right.

So, in conclusion, sound should play an integral part in your productions, and need not be restricted to just effects marked in the script. See it as a chance to develop creative thought and encourage any pupils that are interested to really explore what is possible with sound. All you need is an iPad and imagination....

Do you use iPads to develop soundscapes in your school? Let us know in the comments.

Register for free to continue reading
Registration is a free and easy way to support us.
When you register, you'll join a grassroots community where you can:
• Enjoy unlimited access to articles
• Get recommendations tailored to your interests
• Attend virtual events with our leading contributors
Register Now
Try Later
Already got an account?
Login
Read 5493 times
Tweet