Whether or not you subscribe to the digital native ideology or believe it’s a fallacy, on the whole our students today are more au fait with social media than ever before. Schools have become adept at limiting student access to social media and at managing their own accounts, but it’s often seen as an additional PR tool rather than a legitimate learning activity. Whilst I don’t believe that unrestricted access to Facebook in lessons is necessarily a valid form of pedagogy, I do think the concept of social media is a useful way to break down topics and help to engage students.

"Forcing them to be succinct means that they have to consider the most salient points only."

Before I explain that any further, a confession: Hello, my name is Sarah, and I’m a social media addict. I have multiple Twitter accounts, Instagram, on-going Google Hangouts, no less than three Pinterest accounts and a very under-used Google+ account (or three). I also run our school Facebook, Twitter and Instagram accounts. I think this pretty much sums up my bias here.

It’s no surprise that Twitter features heavily in my classroom. I’ve used it several times in my classes over the last couple of weeks, in a few different ways. I love that Twitter forces students to be succinct - it’s fantastic for vocabulary work, or in this case, defining the learning skills that I had been teaching to Year 7.

Using a free tweet generator, students narrowed down what were initially quite lengthy definitions into bite-sized chunks that can be used as display material around my classroom and around the school. They generally understood the 140-character limit and the idea of hashtags and were keen to see who could come up with the best definitions within those limits.

Twitter is also great as a plenary tool in any lesson. Students can come up with concepts, key facts that they’ve learned, think up questions for the next lesson - it’s a pretty versatile tool. There are plenty of ready-made handouts you can use for this - a quick search using ‘twitter plenary’ will give you some options.

Searching for tweets using hashtags is a fantastic way to get students discussing current events. It can be useful, particularly in Citizenship lessons. This can take some prior planning, as of course anybody can tweet anything, so it’s worth doing a search yourself and extracting the more appropriate tweets. I’ve used trending topics as a discussion starter about current events in form time - often students already know about these topics, and from time to time they have educated me! Those boy band hashtags just won’t disappear...

My last Twitter tip is to use it as a revision tool. A colleague showed me how she has students write a tweet about one particular concept, often a definition (she’s a Science teacher - definitions work great for her), on one side of a page. Again, forcing them to be succinct means that they have to consider the most salient points only, and there’s a good chance they’ll remember a short, sharp sentence than a more expanded definition. We’ve been working on the use of mindmaps for revision with our older students, so on the back of the page students mindmap that particular topic. These become a collection of ‘tweet cards’ to be used when revising, much the same as flash cards.

Quite a popular task that involves using social media in the classroom is to have students create Facebook profiles for characters or historical figures. I’ve currently got students creating them for characters from “To Kill A Mockingbird” - they have to be sensitive to the kind of language and the tone that Atticus Finch may use if he were to use Facebook, the sort of messages he might post on his children’s profiles, geo-tagging the status updates, etc. It’s helping to consolidate their knowledge of events in the novel as well as their understanding of characters. They’ve done some rough work in their books and they’ll shortly be using Fakebook to create online versions.

I’ve also used Fakebook as a revision tool, and created this as both an example for my Year 10 English class and a reminder about some of the major events in Macbeth. It’s lighthearted and uses language they understand, but also contains a few quotes, and you can add video clips to help them to remember key scenes. 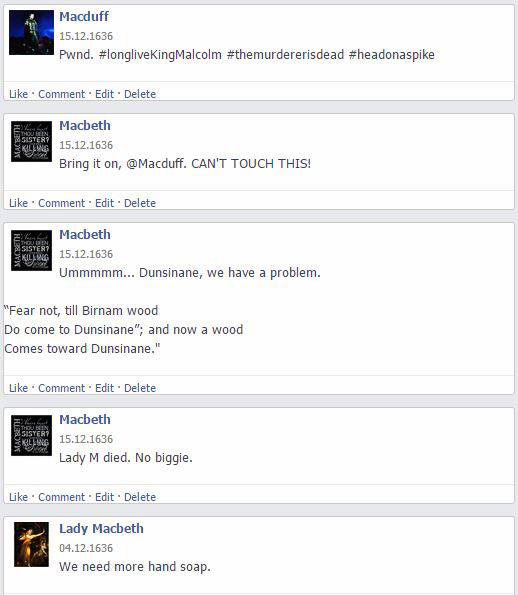 While I don’t use Instagram in class on a regular basis, our Art department does. The head of Art takes a lot of photos of student work and shares it, as well as photos of random happenings in her lessons (lately it’s been a competition to get the longest, continuous pencil shaving). Many students follow this account - she’s careful to manage it appropriately - and it gets students excited to see their work being shown off to the rest of the world. Many of them know that I’ve regrammed their work on our school account, and are keen to let me know if theirs has been Instagrammed so that I can show them off a little more. She also takes lots of photos that are used as inspiration for her students. Among the recent ones have been vintage fabrics and pictures from a museum trip - helping to bring the rest of the world to our classrooms.

The final social media platform I highly recommend using in lessons is Pinterest. Contrary to popular belief, it’s not all cakes and pallets - there’s a huge range of resources available, especially for early years and primary. Of course, you can also upload your own. I set up an account for my students to access. When we’ve done project work I’ve set up some boards and added a couple of pins to get students started. As they do their own research, they add their own pins so that it becomes a collaborative research tool. I’ve seen other teachers use them as mood boards in Design and Technology - students pin items as stimulus for their practical work, be it catering, fashion or product design.

It’s also a great planning tool. I’ve pinned lots of ideas as I’ve seen them, and when I’ve needed inspiration I’ve trawled through and come up with new tasks and projects. We’re currently planning the creation of a kitchen garden at my school, so there’s pins about how to grow various fruits and vegetables, but also a lot about how we can use repurpose plastic bottles in new ways, such as making hanging gardens or to allow self-watering of raised garden beds. If we can collect enough bottles, we’ve also found plans for building a greenhouse with them - though that’s a long way off at the moment!

These are just a few ways to use social media in your classroom. They mostly rely on adaptations of the real thing, but are genuine enough to engage students.

Do you use social media to boost engagement? Let us know below!

Register for free to continue reading
Registration is a free and easy way to support us.
When you register, you'll join a grassroots community where you can:
• Enjoy unlimited access to articles
• Get recommendations tailored to your interests
• Attend virtual events with our leading contributors
Register Now
Already got an account?
Login
Read 6674 times
Tweet