Schools across the UK are being invited to take part in a national survey of internet use by pupils when at home. Education consultant Brett Laniosh from Catshill Learning Partnerships, who are carrying out the survey, said that the results will provide valuable information to schools on the range of hardware such as laptops, tablets, consoles and smart phones being used by young people.

We know that children are using a wide range of technology to get online at home,” said Brett, “including games consoles, tablets and even their parents’ smartphones. This will be a chance for schools to find out what devices their pupils are using and then compare their results alongside the national average when the results are published in time for Safer Internet Day in February 2017.

“We will also be asking schools to collect information about the ‘Internet of things’ as we may well find that internet fridges, kettles or even dog collars are being used at home!” 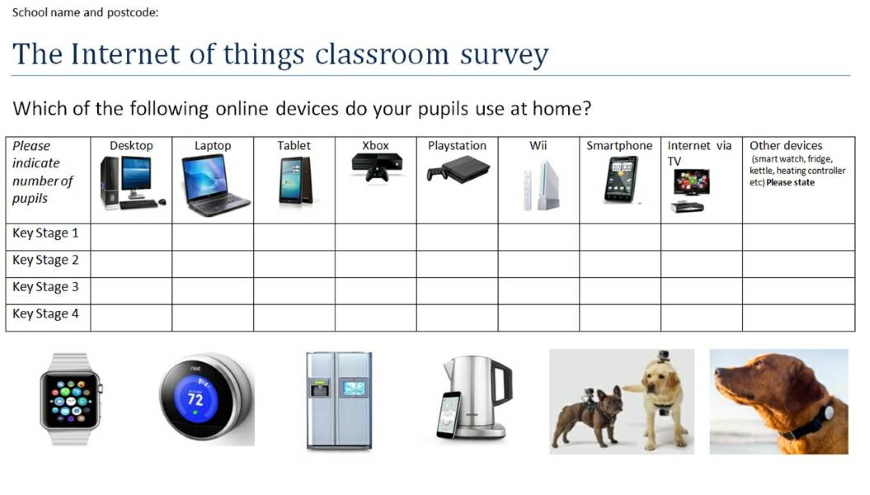 The National Internet of Things survey is supported by edtech association Naace. Once signed up, schools will be sent a survey form that will be completed in each class during the Autumn 2016 term.

Each class will be shown a number of devices and pupils will be asked which they use at home. No personal information will be collected; only the number of devices used. Once each class has carried out the survey, schools return the completed form. Numbers will be collated for each school with the national results published in time for Safer Internet Day on 7th February 2017.

Visit www.catshill.com/pupil-internet-use for more information on how to sign up.