Nottingham Girls’ High School is an independent day school for girls between the ages of 4 – 18. Part of the GDST (Girls’ Day School Trust) Nottingham Girls’ High School is the largest school within the group. The GDST is the leading group of independent girls’ schools in the UK, with nearly 4,000 staff, and 20,000 students between the ages of three and 18. As a charity that owns and runs a family of 24 schools and two Academies in England and Wales, it reinvests all its income in its schools. Founded in 1872, the GDST has a long history of pioneering innovation in the education of girls.

Website: www.gdst.net Email This email address is being protected from spambots. You need JavaScript enabled to view it. 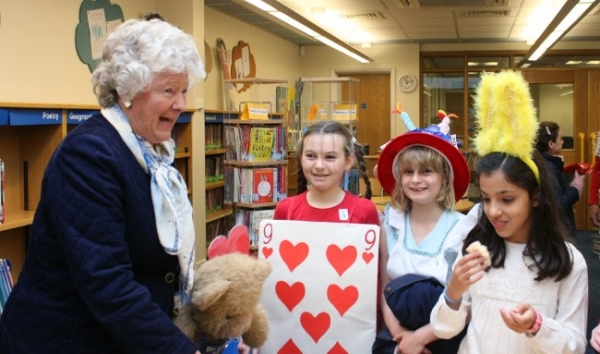 Nottingham Girls’ High School has joined forces with the NSPCC to raise vital funds for the community. Pupils were joined by esteemed alumna Jenny Farr MBE, president of the Nottingham branch of the NSPCC, and held a Mad Hatter-style coffee morning campaign to mark 125 years of NSPCC East Midlands. The event raised over £1000, and included an Alice in Wonderland-themed fancy dress, bake sales, tea parties and an art competition.

Nottingham Girls’ High School is no stranger to dedicated charity work, having raised almost £15,000 for 17 local charities during the 2014/2015 academic year. Earlier this year, Jenny Farr launched a campaign asking people across Nottingham to organise one of 125 coffee mornings to celebrate the 125 years of NSPCC activity in the city.

“Our girls make positive contributions to the wider community, and we have a long tradition of supporting local and national charities,” said headteacher Sue Gorham. “Giving back is an important part of our ethos. It’s fantastic to see how our students inspire each other, coming up with creative ways to raise money as well as volunteering their own time. I’m incredibly proud of all of their efforts and to see them work with Jenny for such an important cause.”

Jenny said: “It makes me proud to come from a school that dedicates so much effort and valuable support for charities and whose students have a genuine passion for getting involved. To see how hard the girls have worked for the NSPCC - a charity so important to me - warms the heart. The event was a huge success and everyone had fun in the process - the costumes and artwork were fantastic!”

Ms Farr MBE has been a key part of NSPCC fundraising for almost 60 years, including spearheading the setup of its Cranmer Street Nottingham Service Centre in 1984. When Cranmer Street Centre was revamped in 2013, it was renamed Jenny Farr House. Jenny was also chair of the NSPCC Full Stop appeal in 1999, and president of its 2006 East Midlands appeal, Child's Voice.

Register for free to continue reading
Registration is a free and easy way to support us.
When you register, you'll join a grassroots community where you can:
• Enjoy unlimited access to articles
• Get recommendations tailored to your interests
• Attend virtual events with our leading contributors
Register Now
Already got an account?
Login
Read 3797 times
Tweet