Editor’s note: Were you at this amazing event? If so, share your experiences of the day in the comments below. Be sure to get in touch, as we’re keen to collaborate with as many Primary Rockers as possible!

When I tell my colleagues about Twitter, I often get the eye-roll. ‘Here he goes again, banging on about Social Media.’ ‘I don’t understand a word of what he’s saying.’ Use the words ‘edu-chat’ and I’ve lost them completely.

I just wish that every Primary teacher in the world could experience the love I felt at #PrimaryRocks Live. In fact, the love that’s there every Monday 8-9pm when busy teachers give up valuable time to discuss their craft. 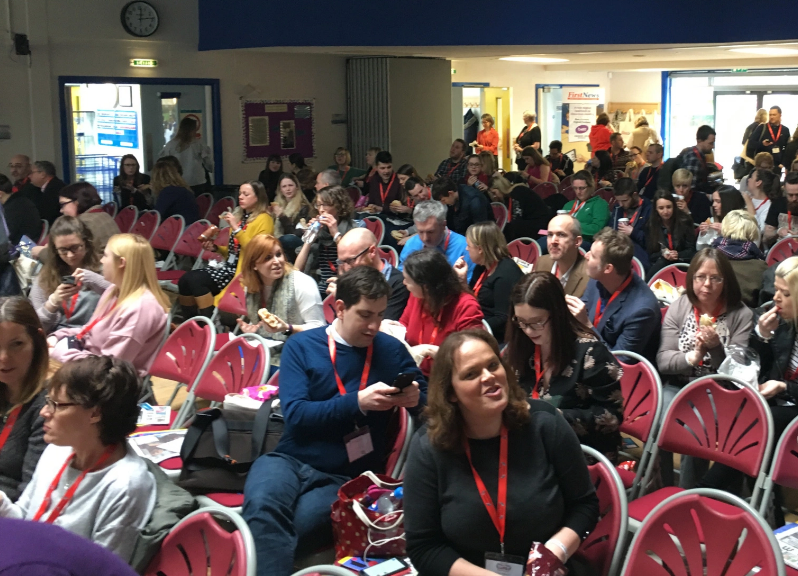 I have been on Twitter for about a year, and in that time my practice has skyrocketed. My pupils have such a variety of learning, almost exclusively based around ideas I have gleaned from the hundreds of Primary teachers who are sharing the amazing work they are doing with their pupils.

I liken the use of Twitter to the difference between a book and a library. A teacher’s development in school is the book. The learning that is available is limited. Your experience is drawn from the pupils in your care, and the colleagues that share your setting. However, with some exceptions, the opportunity to venture beyond your own four walls is limited. That means that all of your teaching comes purely from you, and maybe resources collected at random from a number of websites (you know the ones I mean).

Twitter, in comparison, is a library. I have, in my pocket, the means to contact and interact with thousands of Primary educators from around the country. My sphere of knowledge has gone from my four walls to the four corners of the known world. I can draw inspiration and resources from some of the best Primary Educators in the world, and as a result my own teaching has improved exponentially.

For the uninitiated, #PrimaryRocks is a weekly Twitter Chat focussing on Primary education. Questions are posted, ones that are relevant to Primary teachers NOW, and those questions are answered by hundreds of teachers. Discussions (and the occasional argument) are started, and this cross-fertilisation results in everyone leaving having learnt something new, or even more importantly, having their own practice praised and vindicated. In a world where the profession is on its knees, positivity is at a premium. Positivity oozes on a Monday night.

What's up dudes?! Here are the #PrimaryRocks questions for tomorrow. Come and join in from 8pm :) pic.twitter.com/XXG47hCeU0

There’s a strange thing that happens at an event like Primary Rocks Live. A crowd of people whom I’ve spoken to on a weekly, if not daily, basis for months are all gathered in one room. You walk in, and momentarily it feels like the first day at school. Lots of new faces: some who are already friends, some sat alone. As you venture into the room, suddenly you realise that you recognise some of the faces. I’m sure that guy over there is… Isn’t that woman… Didn’t you like my post yesterday… Whilst you don’t know those people, you do know them. It doesn’t take long for someone to speak to you - we are all teachers after all. Suddenly you realise that the guy shaking your hand is someone you speak to almost as much as your Mum. You already have a shared enthusiasm, a shared understanding, some in-jokes.

Then you are dragged into the warm embrace of the room. ‘That guy’ introduces you to some other people, who you actually already know but have never actually met. The group over in the corner (The Primary Rockers) are practically Rock Stars. Behemoths such as Simon Smith, Rob Smith and Chris Dyson greet you warmly as if you are old friends from years back. You meet new people, develop new contacts, find new followers and people to follow. All of this before you’ve taken your coat off. 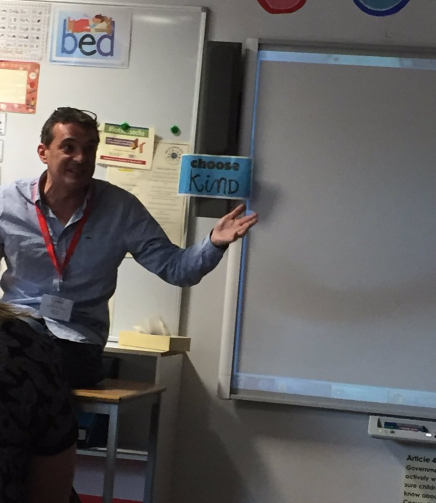 The organisers could have just left us in that dinner hall for the whole day and it would have been worth it. However, what they had in store was better.

The Head Honcho himself, Gaz Needle, ascended to the stage to rapturous applause. Giving us a brief summary of Primary Rocks and his own experience, he built the crowd up and drew us together. He spoke with humour and honesty, a true Primary teacher. In fact, these were two key themes of the day. 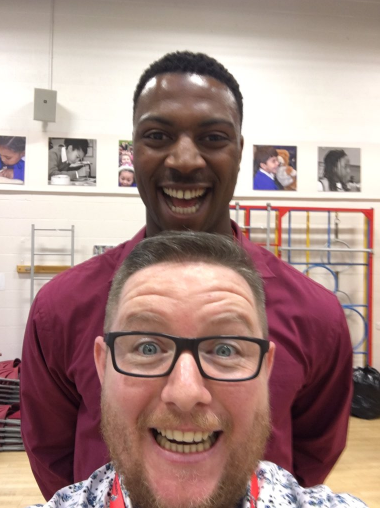 Next up was the opening Key-note was Paul Dix. A world-renowned behaviour expert, Paul spoke with passion about how behaviour in a school has little to do with the children, and more to do with the actions and the behaviour of the staff. His talk was full of examples where schools enacted a change in adult behaviour, resulting in a ‘seismic shift’ in pupil behaviour.

My favourite example was ‘Fantastic Walking’: In a school where behaviour was an issue in the corridors between lessons, the headteacher instilled a system where everybody in the school would walk around showing exactly the same walking style: body straight, hands behind backs, striding like mild version of John Cleese in The Ministry of Silly Walks sketch. Paul’s demonstration of this had the hall in stitches, however demonstrated the importance of staff buy-in in behaviour policies.

He spoke of visits to a particular school in Brazil where a problem pupil was causing havoc. Paul’s advice was simple: Every member of staff would greet that child with the same stock phrase ‘Have you grown? You look more grown-up.’ At first the child was freaked out, but when Paul returned to the school a few months later he asked about the same child. The response: ‘He has no problems, he’s grown up.’ The whole drive of his talk was that if you have a staff that pull together, show a united front and make their management of behaviour consistent, then behaviour improves.

After Paul’s energising talk, the race was on. Who to visit in the first session? I plumped for Tim Roach, although I heard rave reviews for Rhoda Wilson's Whole-Class Teaching approach, Peter Bakare’s enthusiastic approach to imagination, and Stephen Lockyer’s talk on expectations. Tim Roach spoke about improving writing through the medium of Stephen King. I know, right? He referenced King’s non-fiction work On Writing, and broke it down into six precepts:

1) A blank page is scary, even for multi-million selling authors.
2) Developing vocabulary is key, but vocabulary has to be relevant.
3) Grammar is vital, as is correct speech.
4) Description is vital, but shouldn’t be over-used.
5) Dialogue is best kept simple and to-the-point.
6) A good writer is someone who reads a lot and writes a lot.

The main drive of the talk was to keep writing simple and make sure it has a purpose.

Dinner time came, with an opportunity for ‘Networking’ (also known as chin-wagging). The networking was complemented by free ice-cream provided for all the delegates, with a choice of sprinkles!

After dinner, another difficult choice. Do I visit Sean Harford, whose talk about Ofsted was well-received (something that doesn’t happen often) or Mike Watson’s talk about Outside Education, or maybe even hear Gaz Needle’s off-the-cuff talk about his rise to headship. I chose to visit Tim Taylor, the current scion of the Mantle of the Expert method. Tim started by introducing us to the idea of moving children’s thinking between the real world and an imaginary one. We became ‘Fairytale Police’, charged with creating signs to warn visitors away from the Troll under the bridge. Even more impressive, Tim led the assembled teachers to the tomb of Tutankhamun. Armed only with a photograph of the elaborate lock on the Tomb door, he slowly created an image of the inside of the tomb. His nuanced, careful questioning allowed even scarred, jaded teachers to step back in time. The use of silence and open questioning created reflection and empathy, and it was clear what the impact would be when used in the classroom.

Next I visited Allana Gay. Originally moving from High School Science teaching to Primary, Allana spoke passionately about the role of a leader in Primary schools and how individual teachers could access resources and mentorship in order to further their own leadership journey. I left feeling less a humble class teacher, more a Leader-in-training. 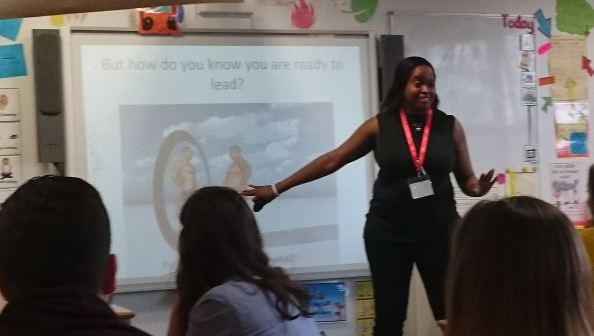 The official part of the day was wrapped up by the wonderful Michael Tidd. Known for his expertise in the use and application of data, Michael’s talk was actually on how schools implement marking and feedback. Honest, hilarious and authoritative, Michael ripped the traditional idea of marking apart. He gave numerous examples of bad, over-the-top marking schemes. He also provided some examples of how marking could be low-workload, high-impact. If only he was speaking to room full of headteachers. 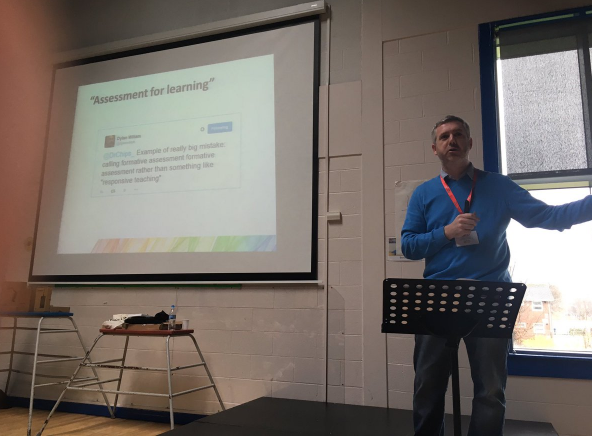 The main intention of events like Primary Rocks is to hear high-quality speakers with relevant messages. In this regard, the event was a success. But more importantly, and probably with a longer-lasting impact, were the relationships being developed. The times in between the talks, as well as the time spent drinking shandies at a local pub afterwards, were where the real synergy was happening. Some of the finest minds in Primary education were brought together over sandwiches, ice-cream and pints of ale. The result being relationships that can be continued on Twitter.

Now that faces match names (or handles), ideas have been exchanged, collaborations discussed, friendships formed: the future is bright.

Another #PrimaryRocks Live done and dusted. If you're a Primary teacher, this community is a downright MUST. #PrimaryEd #UKedchat #edchat pic.twitter.com/7UGROvSld4

Visit www.primaryrocks.com for more information, and remember to share your stories below.