Claire Stoneman is deputy headteacher at Dame Elizabeth Cadbury School, Birmingham, leading on teaching and learning and curriculum. She has also led the development of the school’s anti-homophobic, biphobic and transphobic work, including a collaborative project with Stonewall and the Crown Prosecution Service. The school’s work in this area has been nationally recognised by a number of organisations, including an award from the DfE. As an English specialist, Claire has published a book with Routledge on the teaching of playwriting; she is currently writing a book on LGBT inclusion in schools.

Website: www.dectc.bham.sch.uk Email This email address is being protected from spambots. You need JavaScript enabled to view it.

As the year progressed, I began to be aware of something wasn’t quite right in the school’s culture. In the hubbub of the corridors, canteen, playground and even classrooms, I heard something that jarred me, that really bothered me, and (this is what irked me more than anything), wasn’t challenged. Comments from pupils to pupils went thus:

On the surface, it was brushed aside as ‘banter’, but dismissing it as this is dangerous. It is not banter. The word ‘gay’ was being used as a synonym for something that was rubbish, something worthless. It was bandied about with a thoughtless intensity. And the more I listened, the more insidious comments I heard, and the more I looked, the more I became aware of young LGBT people in my school who were silently enduring being bullied. Who would take the long journey home to avoid bumping into other pupils. Who wouldn’t put their hand up in class. Who would avoid areas of school in unstructured times. Who self-harmed. Deaf ears didn’t hear; blind eyes were turned.

And I became more and more aware of a curriculum that didn’t have any LGBT role models, that didn’t reference, or only fleetingly referenced, esteemed gay writers, musicians, scientists, designers, artists, mathematicians or sportsmen and women.

I knew something had to be done.

Tellingly, The Teachers’ Report (Stonewall, 2009), found that only two in five Secondary school teachers and less than half of Primary school teachers in Britain said their headteacher demonstrated a clear leadership role in tackling homophobic bullying. Thankfully, my headteacher was wholly supportive, as were senior team. To tackle homophobic bullying and language in a school it has to be led from the top. We drew up a plan of action.

Our main challenge was lack of confidence in the staff body. All teachers want to help pupils; we’re all in it"In our foyer is a sign reminding the community that ‘We are all human’." for the kids. The issue was simply that no one had ever provided any training on how to address homophobic language or bullying in school, so the staff weren’t empowered. We began with some training sessions for staff on how to deal with homophobic language and behaviour, with practical hints and tips, and then a small group of staff wrote a ‘home-grown’ series of lessons for PSHE on LGBT role models, the history of the LGBT movement and exploring perceptions of LGBT people in the media. We taught this in our form tutor groups over a six week period, so all pupils from years 7-11 were involved. It was highly successful: teachers reported a reduction in the use of the word ‘gay’ as a synonym for worthless, and our teachers felt empowered to deal with such language if and when it arose in school.

Some things we did were symbolically very powerful. I stood in front of every one of our year groups in assembly and explained to them how homophobic, biphobic and transphobic bullying is wrong. They had to hear it as clearly as that: it is wrong, and we will deal with it in exactly the same way as racism or sexism. I told them the tragic story of Dominic Crouch, the young boy who committed suicide because of rumours and bullying around his sexuality, and of his father Roger Crouch, who also committed suicide because of the trauma around his son’s death. I’ll never forget that assembly: you could hear a pin drop.

The slings and arrows of homophobic comments, language and abuse lessened. 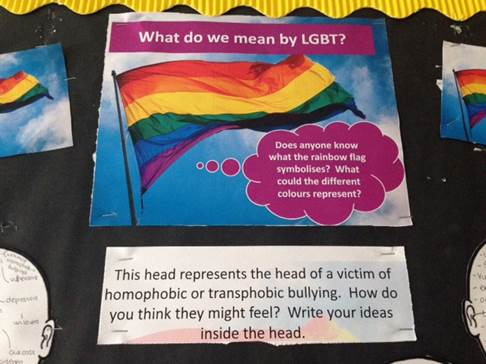 That wasn’t all; our work began to gain traction. To our surprise, we were approached by the Crown Prosecution Service and Stonewall to collaborate to create a teacher resource pack for schools on tackling LGBT hate crime. The resource can be downloaded, free, here: http://www.cps.gov.uk/northwest/get_involved/hate_crime/schools_project___lgbt_hate_crime.

What was most moving for me was that a group of our pupils clamoured to be involved, and over 20 were actors in the DVD that was filmed as part of the project, with excerpts of staged examples of homophobic, biphobic and transphobic bullying for schools to analyse. Never have I been more proud than of our pupils who were part of this project, addressing homophobic, biphobic and transphobic bullying and standing up for what is right. We ran further training sessions for our supportive, caring, committed staff. We piloted all the resources in PSHE in form time again to great success, kicking off the project with a fantastic performance of ‘Straight Talking’ written and performed by Birmingham-based Round Midnight Theatre Company, a play about two best friends, one who comes out to the other. The anti-homophobic, biphobic and transphobic bullying lessons were very well-received by our pupils and staff. One of the most beautiful and poignant outcomes to the project was this piece of writing, written by a year 11 pupil, Max Wilkins, called ‘The Truth’: 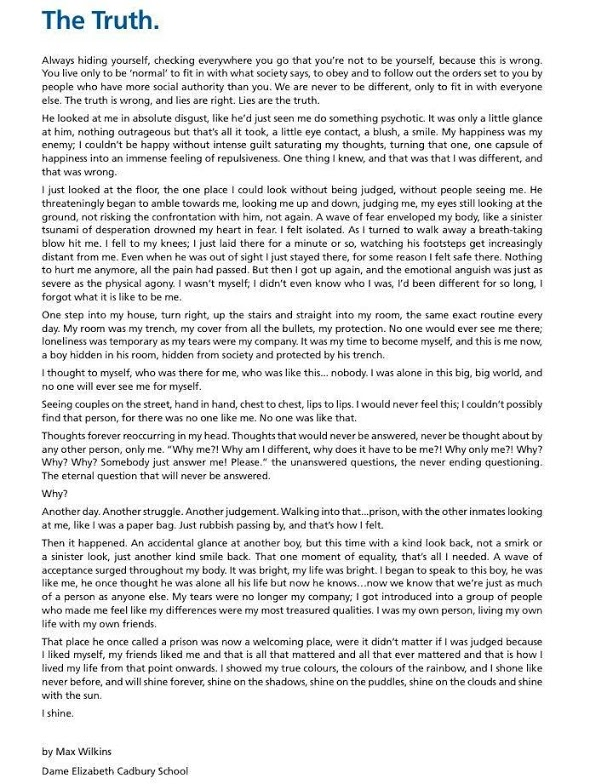 Max has since talked about his experiences to teachers from other schools at an anti-homophobic conference hosted at our school the following summer, and joined me on two occasions to talk to 150 trainee teachers at Teach First’s West Midlands Summer Institute. What triumph over adversity. 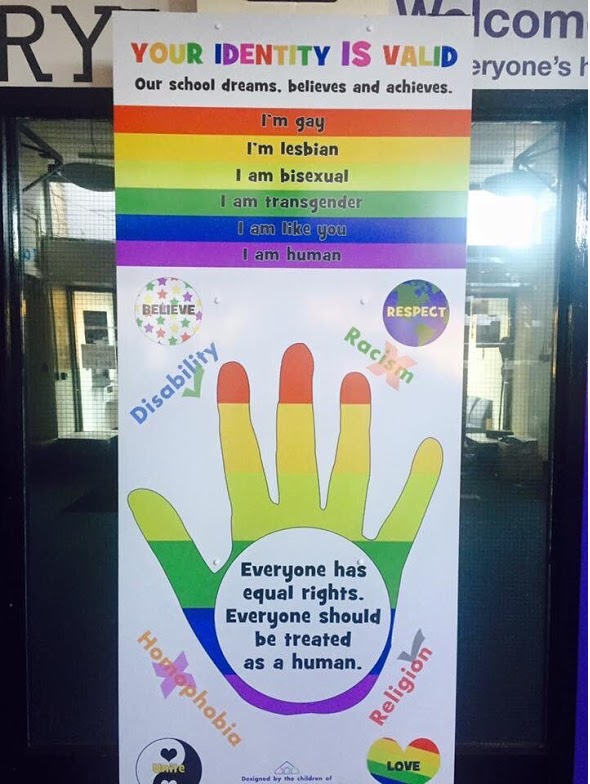 Since those first months of change, amazing things have happened. Our work on LGBT equality has, quite literally, become the very fabric of our school. In our school foyer is a huge sign, reminding the school community that ‘We are all human’ – designed by our pupils. There’s a fantastic mural adorning one of the outside walls, celebrating freedom, including freedom to love who we want to, also designed and painted by our pupils. We have, for three consecutive years running, celebrated Spirit Day in October – where every member of the school community wears something purple as a show of support for bullied LGBT youth. We celebrate LGBT writers, and have a collection of books by LGBT authors in the library for our pupils to read. The curriculum has many opportunities for prominent LGBT scientists, mathematicians, artists, writers, musicians and sportsmen and women’s achievements to be celebrated. Our policies reflect our commitment to equality for pupils and staff and we meticulously monitor all types of bullying so we know we have concrete data to see patterns and changes. Back in 2010, homophobic bullying wasn’t even tracked; according to the data there wasn’t a problem. 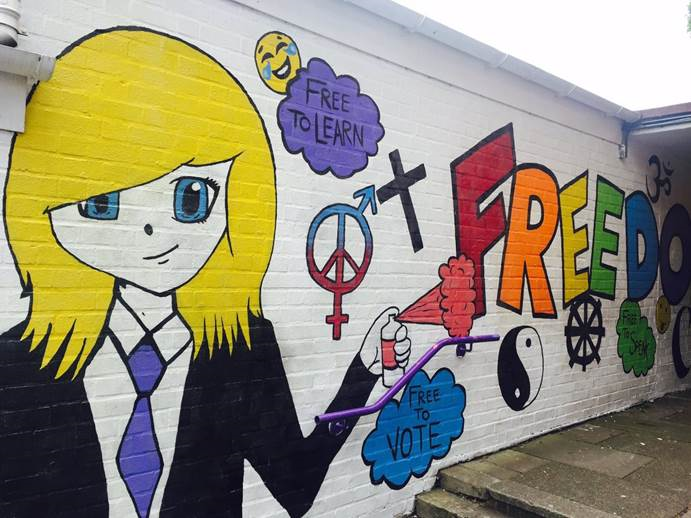 We aren’t complacent. We still run assemblies and workshops on LGBT equality. Our pupils are interested, mature, concerned. They are horrified that young LGBT people endure bullying in other places in the UK and around the world. This makes us very proud: our kids really care. We talk continually about acceptance, not tolerance. No one wants to be ‘put up’ with. Our pupils know we accept and value everyone for who they are. And this is what enables every member of the school community to grow and flourish: pupils and staff know, as it says on the wonderful sign in our foyer, that at Dame Elizabeth Cadbury, their identity is valid.

How do you promote such values in your school? Let us know below!

Register for free to continue reading
Registration is a free and easy way to support us.
When you register, you'll join a grassroots community where you can:
• Enjoy unlimited access to articles
• Get recommendations tailored to your interests
• Attend virtual events with our leading contributors
Register Now
Already got an account?
Login
Read 10380 times