Shivani Lamba is the Director of Forensic Outreach, an organisation founded in 2001 which aims to incorporate forensic science within the science curriculum in the UK and Europe. It has delivered programmes to over 100 academic institutions and charities.

Website: www.forensicoutreach.com Email This email address is being protected from spambots. You need JavaScript enabled to view it. 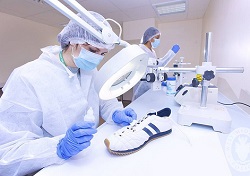 Over the past decade, we’ve witnessed the emergence of forensic science as a cross-disciplinary approach to basic science education in both primary and secondary school.

In most cases, this routinely involves a mock criminal investigation centred around a murder, and is situated almost exclusively within the science classroom. The BTEC in applied science, for example, which incorporates a fairly extensive forensic science component in its curriculum, has further catalysed the adoption of this model in classrooms throughout the UK, ensuring that theoretical science is given an authentic practical element.

Coupled with criminology, the formidable role of forensic science in governance and policy-making provides an inextricable link to the criminal justice system. In this sense, it also has a role in the Humanities classroom as a way to explore issues deeper; in this post, we’ll provide three simple ways teachers can apply it outside the school laboratory.

Late 19th and 20th century history brims with seminal figures in forensic science, who, in some cases, participated in very significant proceedings. One such person is Walter C. Langer, a psychoanalyst known for the preparation of a psychological analysis of Adolf Hitler in 1943 during WWII in which he accurately predicted his suicide as the "most plausible outcome".

Introducing unusual supporting characters in the context of a larger narrative often serves to reinforce a more practical historical understanding (e.g. event chronology) by providing colour to a familiar picture. Consider also the roles of the following individuals: Thomas Bond, a psychologist who profiled Jack the Ripper; Joseph Bell, the inspiration for the literary character Sherlock Holmes; and Cyril Wecht, who consulted on the JFK assassination.

2. Ethics and building the future of forensic science

The rapid R&D of new technologies to combat crime have incited widespread debate over fundamental human values. Such advances often cause commotion in subjects worth discussing within philosophy or ethics classes, such as public security versus private liberty.

Where A-Level Philosophy and Ethics may commonly involve discussions on the arguments surrounding abortion, euthanasia and genetic engineering, forensic science provides a contemporary and unique environment to explore matters that may not be as visible in the public domain. Such issues may include: the recent printing of a 3D gun (and potentially other weapons in the future); the use of smart bullets; and the application of criminology to curb crime 'hot spots'.

3. Science behind the legal system

Forensic scientists refer to the effect of legal dramas on the discipline as CSI syndrome, which refers to misconceptions about the application of science to criminal investigations due to its popularisation in the media. There exists an opportunity to engage students by discussing the role of forensic science in criminal justice and whether it serves to improve outcomes. This is especially relevant in countries and states where the spectre of the death penalty makes discussions regarding the fallibility of forensic science even more important.