Lee has been a Primary School teacher for eight years at Davyhulme Primary in Trafford, Manchester. He provides INSET and CPD internationally, looking at ways to raise standards across the curriculum. He works alongside Alan Peat Ltd and the Literacy Shed. His blog provides teachers with a variety of ideas for using technology in the classroom. Lee has also released a range of eBooks demonstrating how technology, in particular iPads, can enrich teaching and learning in the classroom. His latest eBook, The 12 iPad lessons of Christmas, was the 3rd best selling eBook in the iBook store.

Website: mrparkinsonict.blogspot.co.uk Email This email address is being protected from spambots. You need JavaScript enabled to view it.

The fatal mistake schools make when deploying mobile technology is thinking that by purchasing the hardware, that’s the hard part done. In fact, the easiest step in a school’s iPad journey is buying the technology; the successful use of the technology is determined by what schools do after this.

"To bring the writing alive, the children performed their compositions using the app Shadow Puppets Edu."

I now lead inset and training internationally, helping schools utilise mobile technology to enhance teaching and learning across the curriculum. Many schools who contact me are in the same position: “We have bought the technology... now what?”

When schools decide to invest in mobile technology, they need to have a clear vision for how it will be deployed successfully. The most effective step we made at Davyhulme Primary was to focus on the teachers. Making sure all the teachers received quality CPD and had their own iPad to build their confidence. Schools who do not allow teachers to have an iPad to take home restrict the teacher’s ability to further their understanding and competence with the device. If the only time teachers have to try different apps is during the school day, chances are it won’t happen. Between 7.30am and 6pm, time is extremely limited for teachers within school; very few have time to go to the toilet, let alone practise using the iPad. So if you want teachers to become confident in using this technology let them use it at their leisure and this will make a difference.

One of the training packages I offer and have recently ran at Davyhulme has been Year Group Specific training days. A cluster of schools have invested in the training which has been delivered across seven days focusing on a different year group each day. This sort of training has meant teachers have had time out of the classroom to really familiarise themselves with a range of apps specific to that year group. The training has also focused on projects that use a range of different apps to contribute to a finished piece of work that enhances, transforms and redefines what can be done on paper. I follow the SAMR model when considering how to use technology in education. The research done by Ruben Puentedura recognises four different levels in which technology is used in school:

Without the correct vision, support and CPD for teachers, schools often find themselves using technology to substitute what can be done on paper. This has little impact on the children’s learning and only scratches the potential to the device. Let me demonstrate a recent project, which demonstrates how the use of iPads and a range of apps can redefine what can be done on paper.

Our Year 5 topic in Autumn term is the book Kensuke’s Kingdom by Michael Morpurgo. Using our knowledge of the story we decided to make replicas of the island. After reading an extract from the book, the children sketched out their interpretations of the island 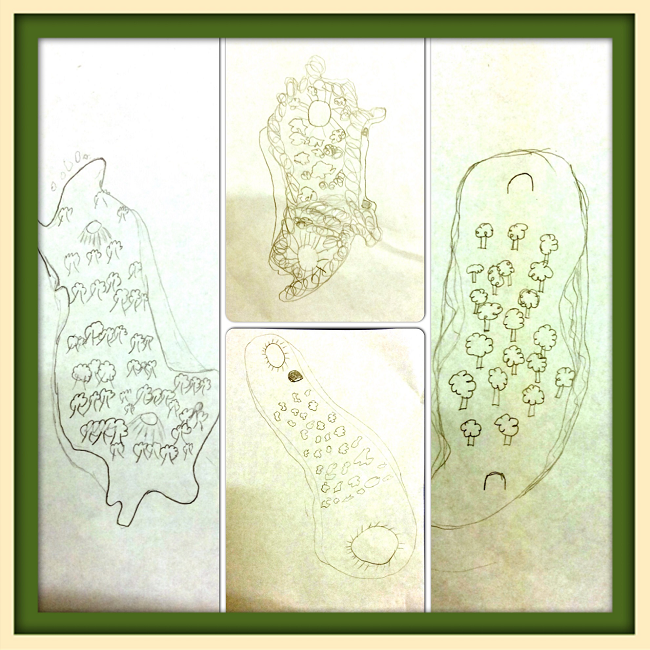 We then decided to make more detailed replicas of the Island using the MineCraft PE app on iPad. Minecraft is an extremely popular video game and one different from many others, in that it has a creative mode. The creative mode allows children to build and create anything they want. It is a game that children relish, and I have seen first hand the increase in engagement it can provide when used in the classroom. I have used Minecraft to inspire writing, to solve maths problems and other topic lessons. In this context it was used as a reading task for children to build the setting based on the passage they read.

The next step was to explore the island in a way that would inspire children to write effective short descriptions. We used the app Panorama 360 Cities. This app allows you explore some incredibly picturesque panoramic pictures from around the world. I decided to collect examples of these panoramic pictures that resembled a deserted island. For example:

When children explore this image on the app they can fully immerse themselves, as the app responds with the child moving the iPad. I then used the program Airserver, which allows you to mirror your iPad screen onto a Mac or PC. The app also allows you to make a recording of the screen, so as children were exploring the panoramic picture, I made a recording on Airserver. The recordings were then saved to our school Dropbox account, where the children could access and download to their iPads.

"The most effective step we made was to focus on the teachers; making sure everyone received quality CPD and had their own iPad to build their confidence."

Children wrote short descriptive paragraphs to go along with the videos. The rich imagery inspired them to write some beautiful work. To bring the writing alive, the children then performed their compositions using the app Shadow Puppets Edu. This free app allows children to import pictures and video clips of 30 seconds then orally record themselves over the visual media. The children can pinch their fingers to zoom in and out of the pictures/video clips, flick between images and also use annotation-tools to highlight aspects of the video. The children’s finished effort can be shared to the camera roll.

The last step in this project was to link the children’s videos to their replicas made on Minecraft. To do this we used the app Thinglink. The web-based app allows you to link text and video to an image. It is completely free, and you will need to create a login so the finished work can be uploaded to your Thinglink channel. I asked the children to choose their images from Minecraft, add text to label parts of the island linking to the Kensuke’s Kingdom story, and then link in the videos created in Shadow Puppets. They had created their own interactive guides to Kensuke’s Kingdom.

The finished piece of work is an example of how technology can redefine what can be done on paper. From children reading an extract and creating a setting using a range of tools not available on paper, to then exploring every inch of the island as if they were standing in the middle of it. Leading to the children transforming their writing in digital stories where children use their voices to effect along with the visuals. Finally, linking it all together into an interactive image that can be shared and published on a school blog for the whole world to see!

Have you used similar methods in the classroom? Share your comments below.

Register for free to continue reading
Registration is a free and easy way to support us.
When you register, you'll join a grassroots community where you can:
• Enjoy unlimited access to articles
• Get recommendations tailored to your interests
• Attend virtual events with our leading contributors
Register Now
Already got an account?
Login
Read 13619 times
Tweet