This year, perfect your learning spaces

Professor Peter Barrett is an honorary research fellow for the Department for Education at Oxford University, and an emeritus professor at Salford University. Peter is an international advisor to the OECD and the American Institute of Architects. He is currently focusing on achieving optimal learning spaces in schools. The findings of this work have, for the first time, isolated a significant influence of Clever Classrooms on variations in pupils’ learning. Peter is also a contributor to the Gratnells Learning Rooms project..

Website: www.learning-rooms.com Email This email address is being protected from spambots. You need JavaScript enabled to view it.

A couple of years ago I led a study which provided the evidence, for the first time, that the physical characteristics of the classroom not only affect the learning progress of Primary school pupils, but impact very significantly. Taking everything together, the measured impact of the classroom design factors explained 16% of the variation in learning of the 3766 pupils - in the 153 classrooms - assessed.

You can read the full results of what we called the HEAD (holistic evidence and design) study in my Clever Classrooms illustrated guide. It is free to download at cleverclassroomsdesign.co.uk. 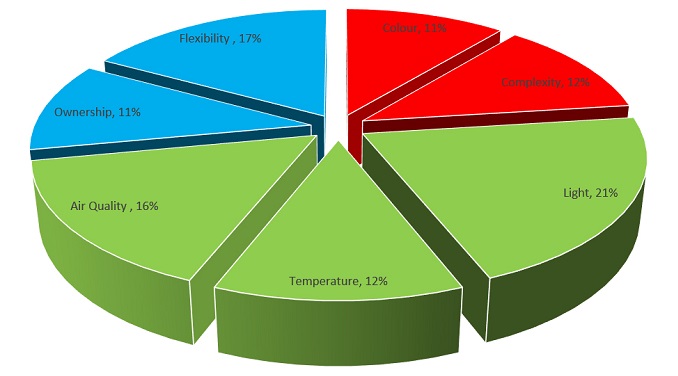 We really wanted to focus on the viewpoint of the pupil in the classroom, so we developed a special SIN model to guide the data collection and analysis. The results“Learning areas need to actually feel distinct.” showed that the N (naturalness) factors accounted for just under half of the 16% impact. It’s great to be able to prove this, but it was expected, since it includes such basic issues as sufficient light, good air quality, and effective temperature control.

Next up was the level of ambient S (stimulation) provided by the visual complexity and colour of the classroom space. This is something that has often been debated, but there is little agreement. Our results clearly showed that mid-level stimulation is optimal for learning - not too chaotic, and not too boring. Obvious maybe, once you know.

Perhaps the most surprising element of the HEAD approach was the idea that the level of I (individualisation) could perhaps be so important for learning. This was driven by consideration of how people process sensory information in their brains and the fact that we build up individual preferences.

To test out this idea, two aspects of the classrooms were studied: the opportunity for ownership, and the availability of flexibility for the pupils and their teacher.

The HEAD findings on the impact of individualisation are very surprising. Not only are the factors involved statistically significant in their impact on learning, but the scale of the effect is big - between a quarter and a third of the overall 16% impact is accounted for by ownership and flexibility.

So what are the practical opportunities to best improve the Primary school classroom for learning?

This is the creation of a space that the children feel is theirs. This is because it has character, has their marks as individuals on it, and is properly set up for people of their size and age. These are simple issues, but involve a wide range of considerations to achieve the maximum effect.

Let’s begin by asking if the room is a simple, anonymous box, or does it include distinctive design features? These features may be built-in through interesting floor plans or unusual ceiling design. If not, the teacher will have to work harder with the class to make their space their own.

This could involve fairly large-scale class-made displays that are instantly recognisable (whilst avoiding creating too much visual stimulation). I will never forget the classroom with a full-size tree made of painted cardboard boxes that you had to walk under as you entered. It can also be worth signaling the entrance of the classroom in the corridor outside, so that pupils have no doubt when they have arrived at their “home” base. 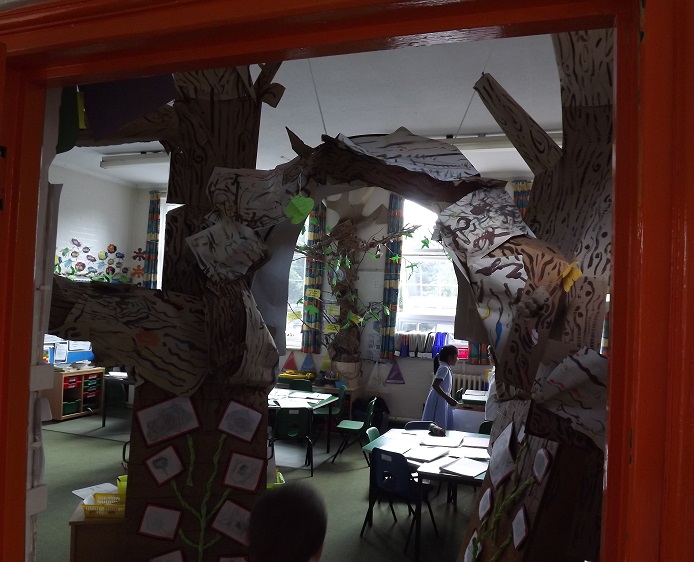 The next consideration is whether pupils get the opportunity to put their personal mark on the classroom? Can they see themselves in the space? An easy way to achieve this is for pupils’ work to be displayed on the walls along with other examples of their efforts. A danger is that extensive displays are all teacher-created learning materials. Do the pupils have individual trays, pegs, lockers? If so, do they have their names on them, and maybe small photographs of their faces? The overriding thing to ask is: does this classroom obviously belong to these pupils?

Now consider if the classroom is thought through for children of the given age? This concerns the provision of good-quality desks and chairs of the appropriate size, together with furniture and fittings that create a child-centred space that makes the pupils feel comfortable and valued. It is striking that, in work we did in Norway, we saw excellent provision of fully-adjustable chairs, but at the same time high-quality, but very severe, desks and cupboards. These created quite an alienating feel for young children.

Other things to consider are low-level sinks and interactive whiteboards that children can reach. Also, low sill levels to windows, as well as the provision of window seats, allow staff to maximise outside views.

This is built up of physical classroom features that deliver options to both pupils and teachers about how they access learning opportunities. Aspects include: the availability of different spaces, plenty of wall areas for displays, and plenty of storage. Some of these will be relatively fixed through the initial design of the classroom, but others will be dependent on how the space is set up and used.

Are there well-defined learning zones within the classroom? These could be areas for activities such as reading, role-play and Maths, as well as wet and carpet areas. Ideally these need to actually feel like distinct areas, so it’s preferable if they can be accommodated within natural recesses in the shape of the classroom. If not, then they can be formed through the use of furniture. It is good if they can also be defined by changes in colour and / or level, otherwise a rather chaotic feel can be created raising visual complexity / stimulation issues.

Learning zones are linked to the teaching methods employed, so providing more is generally appropriate with younger pupils at “A more comprehensive approach can be taken.”KS1, whereas fewer are normally needed in KS2. In KS2, space can often be at a premium as the children, and so desks and chairs, tend to be bigger, but often the classroom is not. One issue we have noticed is that pupils love ‘found’ or part-made spaces, where they have permission to form the spaces as they choose. It is possible to try too hard to provide all they need.

Secondly, is there a breakout space associated with the classroom for one-to-one or small group work? Such an area may beshared, but provides an invaluable extra dimension for the teacher to set up different activities and deliver them without clashing with the main classroom. This flexibility can be distinguished from having lots of open space, which does not support different-but-adjacent activities in the same way.

Thirdly, there is a need for sufficient wall space to flexibly support the creation of displays, as discussed under ownership. Such spaces can easily be lost where there are large windows and high storage cupboards. That said, the common solution of putting display material up on the windows is not the answer as it hits daylight negatively, which is an important SIN naturalness factor.

Fourthly and finally, there is always a need for sufficient storage that is accessible to the teacher and pupils. Sometimes this may be difficult to achieve in the classroom itself. However, if the corridors are sufficiently wide, it can be augmented with the provision of cupboards and maybe lockers in the space outside the classroom. Without adequate storage provision the opportunities for the class to switch activities, using different learning materials, will be hampered. Architects Chadwick Dryer Clarke cleverly built storage into a partition between two classrooms at The Stephen Perse Foundation in Cambridge: 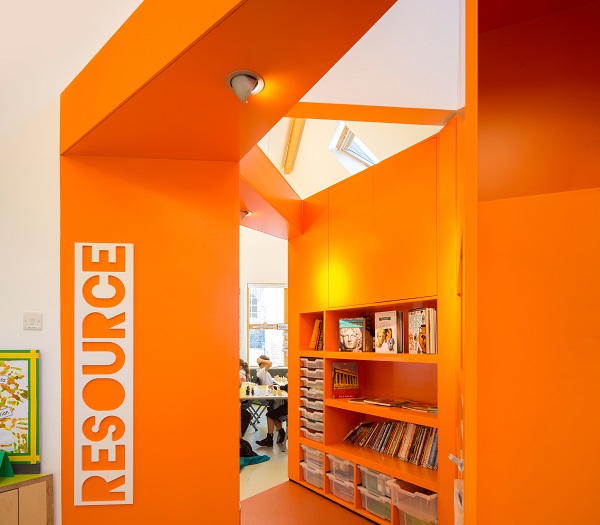 What is clear is that the issue of individualisation in the classroom deserves higher prominence, particularly as its impact on learning has now been clearly evidenced. In fact, when progress in Mathematics specifically was investigated, individualisation was found to be the biggest factor. It would seem that pupils feeling comfortable in their classroom pays real dividends for this subject where confidence issues are often experienced.

There are many choices that teachers can make to improve the experience of their pupils in terms of individualisation. Often teachers would have done some of these things intuitively, but now a more comprehensive approach can be taken. Some aspects can be facilitated by the basic architectural design of the classroom. Plus, wherever possible, designers should be sensitive to these needs and create classrooms that naturally support teachers and pupils in making them their own.

Register for free to continue reading
Registration is a free and easy way to support us.
When you register, you'll join a grassroots community where you can:
• Enjoy unlimited access to articles
• Get recommendations tailored to your interests
• Attend virtual events with our leading contributors
Register Now
Try Later
Already got an account?
Login
Read 5597 times
Tweet