Survival is the only organization that champions tribal peoples around the world, helping them defend their lives, protect their lands and determine their own futures. Their work is preventing the annihilation of tribal peoples, giving them a platform to speak to the world, investigating atrocities and presenting evidence to the United Nations and other international forums. Survival support legal representation. They fund medical and self-help projects. They educate, research, campaign, lobby and protest.

Website: www.survivalinternational.org/info Email This email address is being protected from spambots. You need JavaScript enabled to view it.

A native of the Yawanawá tribe, which translates to The People of the Wild Boar, Nixiwaka took some time to tell pupils about how his tribe is under threat, all which dressed in his full tribal dress. According to Cambridge News, the Yawanawá are one of around 400 tribes across the Amazon Rainforest, many of whom are facing threats from those wanting to mine the area for oil, gas, logging and agriculture. "In the rainforest, you are completely connected to the elements,” said Nixiwaka. “You are surrounded by the constant sounds of animals, insects, frogs and water. At night you are illuminated by the stars, which shine endlessly. It is beautiful. There is still racism towards Indians in Brazil today. People think that we 'live in the Stone Age'. The truth is that we are constantly adapting to the world around us. We aren't living in the past, we are just different.

“I am working with Survival visiting schools, colleges and universities around the UK. The students know many things about the rainforests from their books but this is the first time they have met a real tribal person. I feel honoured to be sharing my story. I want people to understand and respect the way we choose to live.” 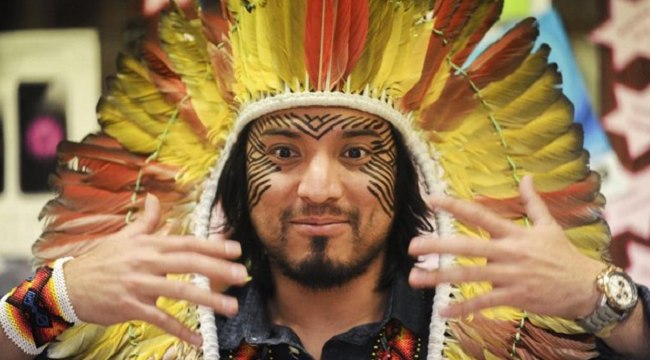 Melanie Menell, who co-organised the visit, said: “We thought it was really important to raise awareness about what is happening in the rainforests. It was a brilliant opportunity for children to understand how people live in another part of the world.

"He was great. He told them stories about living in the jungle, the food they eat, the animals around them such as panthers and the challenges they are up against. He did not get too heavy about it but it was about raising awareness about their plight."

Those wanting to learn more about Nixiwaka’s inspirational journey can read his interview on the Survival website. He is also on Twitter as @Survivalnixiwak.