Mike Gunn is Head of the nationally-recognised Creative Arts Faculty at Finham Park School in Coventry. He has been seconded to the leadership team to implement the strategy for a whole-school roll-out of BYOD, taking responsibility for strategy, infrastructure, trialling teaching and learning through mobile technology, and staff training. He has shared his expertise at Teachmeets and CPD conferences around the country, and blogs (reasonably) regularly about his work here. Perhaps less believably, he is also a t'ai chi and kung fu master of some 20 years. So it's worth paying attention!

Website: about.me/mike.gunn Email This email address is being protected from spambots. You need JavaScript enabled to view it.

Media teachers have a plethora of technology available for use in their duties, but which tablet to use? Finham Park School’s Head of Creative Arts Mike Gunn shares why he lives and dies by the iPad when it comes to media studies.

As an advocate of BYOD, I've always talked to colleagues about the benefits of different devices and approaches within a "mixed economy" digital learning space (or "classroom where everyone's phone is different”, as it's more commonly known). Largely, what you want to do should dictate the type of device you use, and I'm quite happy to work in a multi-device environment. Until I walk into my Media classroom.

I should make it clear that I have no particular beef with any other individual device, or operating system, or anything else at which you think I may be showing signs of beefage. But the iPad has always been, and remains for the moment, the device with the most power in terms of Media and Film teaching. Think about it in terms of the skills you are trying to teach, and you'll see why:

Analysis is about note-taking, acquiring knowledge, and applying that knowledge in such a way as to develop critical faculties. This is one area of Media and Film Studies which might be considered "device-neutral" (bear with me here, we're in a new digital environment, and there will plenty more neologisms before the blog is out!). For note-taking, I use Evernote, with its easy-to-use UI, easy sharing, tagging and cataloging, and the ease with which I can record verbal feedback as audio attachments to notes. For formal written work, there's GoogleDocs, with comments, editing, sharing, peer feedback and revision checker facilities (I've written about these here, so forgive me for skimming). We do a lot of mind-mapping through Popplet, we use Notability to distribute, annotate and save PDF resources, and we use Explain Everything amongst others to offer different ways of showing learning. So far, so uncontroversial in BYOD terms. I don't think there is an app there which isn't multi-platform, and that's part of the reason I use them, because the students can get used to them in my lesson, and transfer those skills to their other lessons where a variety of different devices are in use.

Similarly, in terms of resource curation, there are a host of ways of bringing information together for your students into one place which again should be accessible on whichever platform you want. Except Blackberry. There's always a kid with a Blackberry. And they're always the ones who can't access ANYTHING! I digress, somewhat bitterly…

Youtube is where all my video tutorials go (might just have blogged about that before as well), Pinterest is the magpie nest where I collate all of the useful and/or shiny things I find on the web, and if you don't already have a VLE to centralise all of this stuff at your school and distribute it to your students, you could do worse than Edmodo, an excellent all-rounder which has been made to mimic Facebook in an "acceptable to all teenagers" sort of a way.

Finally, for revision, there are a couple of nice apps called Revise Media Studies and Revise Film Studies which are, somewhat predictably if you've gathered the gist of this blog so far, also available on iTunes and Google. They're both pretty good for vocabulary learning, though if you want your students to learn specific definitions of yours, why not get them to make their own flashcard sets with Quizlet? It matches definitions to key terms, and has lots of useful games for testing, and it's available... You guessed it. Here's one I made earlier, à la Blue Peter. Or was it Jamie Oliver? Always get those two mixed up.

Practical Media and film production are the areas where Google struggles to keep up with the vast breadth of the Apple app ecosystem, and where Windows are... well, the less said the better frankly. Here, iTunes seems to have a plethora of simple tutorial apps available for Film which show you the basics of filming and editing, such as Making Movies Make Sense and for the more advanced students, the more in-depth CLOSE-UP, an app of advanced film vocabulary which is really useful, with a variety of checklists for commenting on different elements of filmmaking. For example, the checklist for Lighting includes sliders between low and high-key, high and low contrast, soft and hard light, as well as options for shadows, composition and light sources. Developers just seem to think that their most lucrative education market will be Apple users, and thus they write first for iTunes. Some stop at that, others get a Google app up and going soon afterwards, but that, I think, is why Apple are currently still ahead of the game. 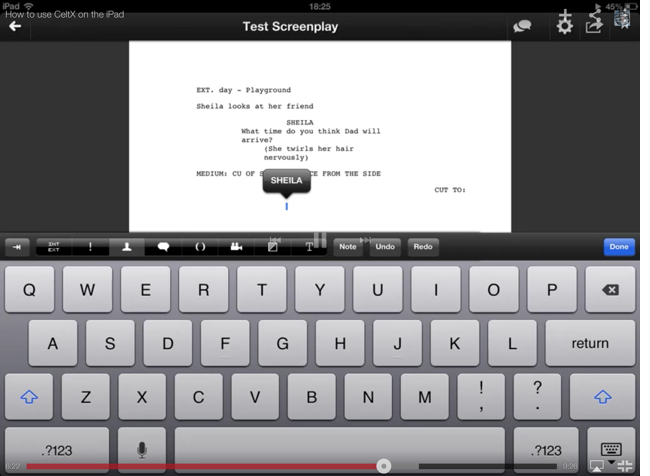 One of my favourite simple apps for creating scripts of any kind (theatre, radio, TV, film) is CeltX, and the iPad app is excellent for this. The app formats scripts exactly as they would be presented professionally, and prompts you for slug-lines, actions, character names, dialogue, parentheses, camera angles et al. When you write in what you want, the app automatically formats the information as it would be in a script. Character information is in capitals and centred, for example, whereas dialogue is indented appropriately. A free account means you can access any of your scripts in the cloud, via the desktop app, the iPad app, or the online editor. Simple, brilliant. Available on Google, but not as crisp or easy to use for some reason. No idea why. 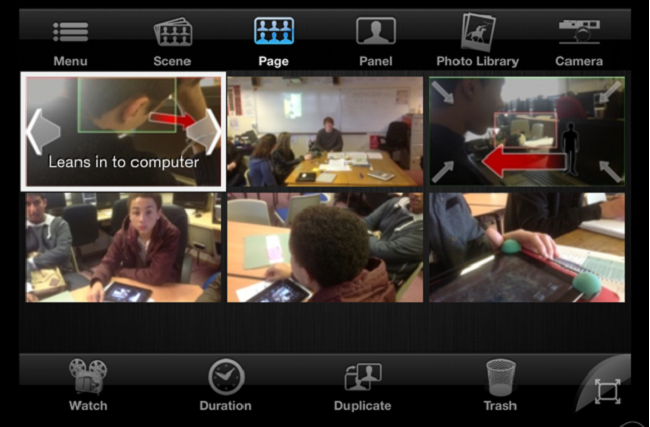 Cinemek: Why can't the kids ever pronounce it?!

Storyboarding is one of the filmmaker's key tools. There are a shedload of storyboarding apps out there, but the one I love most is Cinemek, because it uses photos taken on the device you are working on, and incorporates them into the storyboard frames. That seems like a faff to some students, because they want to draw something quickly and get on with filming. But the beauty of needing to take photos is that students need to think beyond showing the story events: They need to work out where they are shooting it from, what angle is best, the distance of the camera from the subject etc.

And all of this gets them into the swing of thinking of the film product not simply as a story-showing device, but as a means of artistic expression in itself. And while the camera shooting gets them thinking about framing, the storyboard itself gets them to think about timing (they can change the duration of each frame), about camera movement (they can insert track and zoom symbols), about how the script and the visuals go together, and finally they can even play back a quick video to show them how the storyboard looks in motion. Awesomeness.

If you're a "real" film or media teacher, the iPad filming solution isn't a satisfactory one, but filming on an iPad certainly gives you an idea of pre-viz, and at lower ability levels or for younger age groups, it offers a lot of practical skills if you combine iPad filming with iMovie editing (especially good for its trailer templates) and / or Pinnacle Studio: The two have different functions, but are becoming much of a muchness (speed up, slow down, titles, images, sound effects etc). It's now also possible to get a bit better quality of sound and stability with Mic attachments (such as the iRig system, for use with proper microphones) and tripods designed deliberately for use with iPads. You can even control a multicamera shoot with the Collabracam app and if you want to go really nuts, there are basic Green Screen apps, as well as some more fun things like ACTION MOVIE, an app which allows you to ham up your real-life footage with exploding monsters, tumbling cars, you name it. All of these are plenty to exercise the creative minds of young students, and the process and skills are the basics you want them to learn for later on in their Media and film careers, from pre- to post-production, just a bit simpler.

There are oodles of photo editing apps out there too, many of which do some neat things (Snapseed, Filterstorm, PS Express to name but a few), but few of them seem to do everything you want. For some reason, the apps which alter photos don't do good layout design, and the apps which do good layout aren't great for image editing. Personally I go with PS Touch for combining posters and images, and working with layers especially. There are standard Photoshop tools such as selection, magic wand, painting, cloning and blurring tools, as well as adjustment tools, a load of preset styles and effects, text, fill, gradient, lens flare... You get the idea. There's a lot of stuff. PS Touch makes them savable and they can then be used in other apps from the camera roll. However, having praised it to the heavens for its functionality, I should warn you that the functionality is inversely proportional to its usability! Get your degree first, then try to work out how to use it… 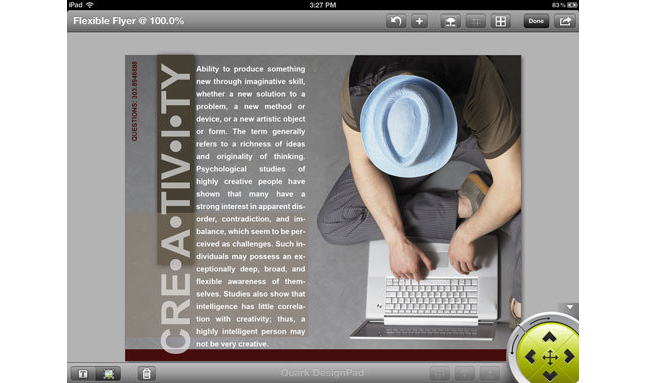 For bringing the whole thing together, Quark DesignPad allows you to create full design products which are exportable as PDF and PNG. We use Adobe InDesign with A-level students, but this is pretty good as a cut-down version. The app allows you to place boxes, designated them as text or image or background, give them shape and outlines and colour / opacity properties. And unlike PS Touch, the interface is a lot more intuitive. Between the two of them, you can get some pretty fancy print work going.

There are tonnes of app design and webpage design tools out there to choose from, and I'd be loathe to name one over another, because their suitability will depend largely on your proficiency level and the quality and key functions of what you want to achieve. You can easily knock up something from templates with apps such as Simpl easy website builder. On the other hand, if you want to build from scratch and have something which is CSS editable, you could go for something like i-Dzign Web Page Builder, with its easy WYSIWYG interface, ability to save in a variety of formats, and also the ability to publish via an in app FTP client.

And there you have it. An almost complete tool-kit for Media and Film teachers, all on one portable (beautifully designed and premium-priced) device. Get a class set. Get an AppleTV to show everyone's work, and Robert's your father's brother and other such old-fashioned witticisms.

Have you used an iPad for teaching media studies? If so, share your experiences in the comments below.