Dr Ingrid Wassenaar is a former Fellow of Christ's College, Cambridge. She went on to work as a change management consultant for SHM and as a senior researcher for The Key. She is now an independent education consultant.

Website: ingridwassenaar.weebly.com Email This email address is being protected from spambots. You need JavaScript enabled to view it. 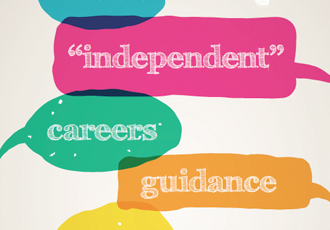 From last September, all secondary schools must provide “independent” and “impartial” careers guidance to pupils in years 9-11. This should include information on all options available for 16-18 education or training, including apprenticeships.

This article looks at what is meant by “independent guidance”, and how schools might best provide it. It is based on the findings of a pilot Transitions Programme, carried out in secondary schools between September 2011 and March 2012, and funded by the RSA.

What is independent guidance?

The Education Act 2011 states that, to be independent, careers guidance must come from a person not employed at the school. Accompanying statutory guidance, issued by the Department for Education, elaborates somewhat, stating:

“Schools should secure access to independent face-to-face careers guidance where it is the most suitable support for young people to make successful transitions, particularly children from disadvantaged backgrounds or those who have special educational needs, learning difficulties or disabilities.”

It also states that careers guidance activities “may take place on an individual or group basis and may be face-to-face or at a distance (including help lines and web-based services).” [my emphasis]

This implies that if a school believes its pupils do not require face-to-face support, it need only direct them to websites and telephone helplines, since these satisfy the conditions of externality and independence in the legislation. As if to underline the notion that face-to-face support is not required, the Government is promoting its National Careers Service, which offers such online and telephone support.

The problem with this is that providing independent, impartial careers guidance can too easily default to giving pupils a list of websites to visit. Information is satisfyingly concrete. But it is not enough. We live in an information age: it is possible for young people to research their options very quickly — and independently. What they may well lack, however, are the agency, resilience and decision-making skills required to make use of the information available.

The findings of the RSA-funded Transitions Programme, which worked with Year 12 pupils in four schools around the country over a six-month period, indicate that all kinds of pupils can benefit from challenging, face-to-face mentoring concerning their careers and futures.

The programme focused on coaching and training rather than guidance. The aim was to motivate pupils to identify, and start to achieve, their long-term goals by building their agency and resilience.

The one-to-one sessions were short, challenging coaching sessions, tailored to each pupil, with exercises designed to prompt reflection and get pupils to think more deeply about their futures.

At the start of the pilot, it was clear that most pupils had never considered their long-term futures. Many either had inflated expectations or were selling themselves short. Their decisions were often influenced by parents or teachers, and they lacked the confidence to make their own choices.

The programme challenged pupils’ preconceptions, which some found difficult. As one pupil said: “I don't want to make a decision, I want to be told what to do. Although I hate being told. But I hate making decisions. Even small things”.

Overall, however, the findings indicated that coaching young people early in their careers helps them learn to manage change for themselves. Many pupils came to the final coaching session with significant, concrete decisions about their future. Managing change is vital in an employment world of portfolio careers.

Coaching is widely used in business training. Its value is in actively challenging people, within a clear and secure framework, to move forwards. Coaching young people works as a preventative, addressing issues that might damage pupils’ motivation later in life.

The Education Act 2011 states that careers guidance should be what “the person giving it considers will promote the best interests of the pupils to whom it is given”. This ignores the idea that pupils are, and need to be, the agents of their own success. Young people are full of passionate interests. What they need is support to enable them to make effective, concrete and sustainable decisions about their futures. Careers coaching can be the difference between simply dispensing information and really motivating pupils to take positive action.