How you can cut down teacher workload

Written by  Learning by Questions (LbQ)

Learning by Questions (LbQ) is an easy-to-use app that increases learning whilst decreasing teacher workload. Filled with scaffolded Question Sets aligned to curriculum objectives in KS2-KS3 Maths, Science and English, pupils receive immediate feedback to every answer whilst live performance analysis is delivered to teachers so that interventions can be made, and misconceptions corrected at the point of learning. Independent studies by the IEE show that LbQ can increase learning by more than 20%, and teachers are saving hours every week.

Website: www.lbq.org Email This email address is being protected from spambots. You need JavaScript enabled to view it.

There is a parable about two woodcutters. Determined to prove their superiority, they decided to have a competition to see who could cut the most trees down in one day. One woodcutter chopped on relentlessly, spurred on by the intermittent silence of his competitor whom he assumed was exhausted. But when the day ended, he discovered to his horror that his competitor had felled twice as many trees! His competitor had triumphed, simply because every-so-often he had taken time to sharpen his axe.

When do teachers get time to sharpen their axes? Okay, perhaps a poor choice of words, but you understand my meaning. The National Education Union believes that 84% of teachers only find their workloads manageable ‘sometimes’ or ‘never’.

Tony Cann CBE was the founder of Promethean. In the edtech world he is something of a giant, revolutionising classrooms around the globe by replacing blackboards with sleek interactive panels. But he is also the first to admit that technology alone is not the answer:

“Truthfully, technology has improved engagement but not made as much impact on learning as I would have liked. Teachers often do not have the time to familiarise themselves with anything but the simplest of applications and, unsurprisingly, the net benefit can be too small to justify the time it has taken for adoption.”

Tony and his team at Learning by Questions (LbQ) have spent the decade since leaving Promethean developing an easy-implement teaching and learning tool, one that both increases student attainment but actually lowers teacher workloads. The result is a downloadable app, filled with curriculum-aligned Question Sets that captivate and enthuse children, also scaffolding their learning from understanding through reasoning, fluency and more complex problem solving. Every answer receives personalised feedback and is automatically marked, providing instant insight for teachers. 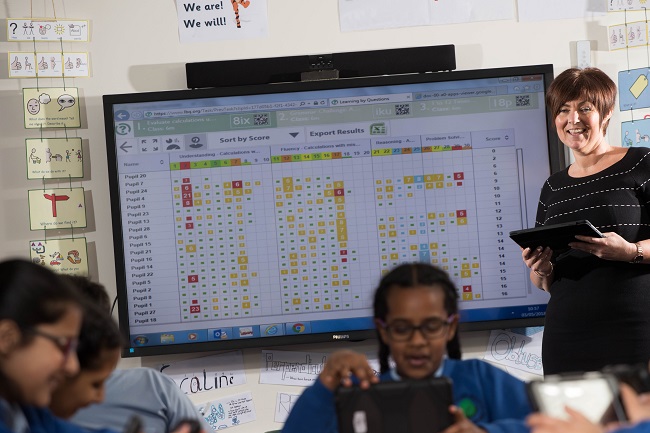 Over the last academic year, LbQ has been piloted in 50 schools across the UK with phenomenal results:

”Within five months, a third of the pupils in my Year 8 low ability group made their objectives for the year and half exceeded them!” Emma Tranter, Ribblesdale High School

“I love the way it has given me time back. Not having to produce resources, plan or mark as much has helped massively in my work/life balance.” Sarah Harper, Waterloo Primary School

In the LbQ pilot, even with low usage of just one to two times a week, 75% of Secondary teachers saved between one-to-two hours each week. This compares very favourably with the BESA Edtech Workload Survey 2018, which found only 21% of teachers made the same saving with general edtech usage. Similarly, at Primary level, 50% of LbQ teachers saved one-to-two hours, compared to the BESA reported 17% for general edtech use. LbQ is more than doubling the number of teachers making comparable time savings every week. As more LbQ Question Sets in more subjects become available, the savings will be even greater.

We know this will sound like every other teaching solution that’s currently clogging up your inbox. But LbQ is a very sharp axe that’s going to allow teachers to finally see the wood for the trees.

Find out how it worked for Annie and Ben at Lancaster Lane Primary:

Register for free to continue reading
Registration is a free and easy way to support us.
When you register, you'll join a grassroots community where you can:
• Enjoy unlimited access to articles
• Get recommendations tailored to your interests
• Attend virtual events with our leading contributors
Register Now
Already got an account?
Login
Read 6079 times