Paddy Carroll is the assistant head at Shaw Wood Academy in Doncaster. He has been a primary teacher for 15 years. Paddy is also a British Council Schools Ambassador.

Website: https://shawwoodacademy.co.uk/ Email This email address is being protected from spambots. You need JavaScript enabled to view it. 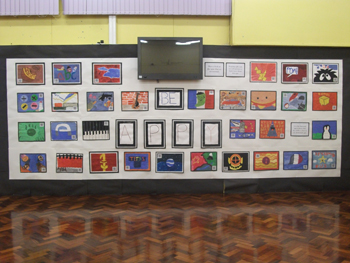 Like many schools across the world, Shaw Wood Primary in Doncaster is discovering the benefits that mobile technology can bring to its curriculum.

Introducing mobile technologies at Shaw Wood was something of a venture into the unknown. As the school's IT Coordinator, I decided to use the eTwinning collaboration tool to work closely with Anne McMorrough and her primary class at St Martin de Porres National School in Dublin, which was also experimenting with mobile apps. Since September 2011, pupils at the two schools have exchanged reviews and advice about the apps that they have used, communicating via Skype, email and blog posts.

One app that has been used particularly frequently is the free augmented reality application Aurasma.

Aurasma enables a user to take a photograph of a real-world object – such as a building, newspaper headline, billboard, etc. - then to “overlay” that photograph with images, videos or Aurasma animations. Other Aurasma users can, by hovering their mobile phone over the real-world object, view the overlaid image, video or animation.

For instance, using Aurasma, Year 6 pupils took a picture of their class photograph and added to it an animation providing information about the pupils – such as their favourite sports, singers and animals. Visitors to the school who come across the class photograph are invited to view it through the Aurasma app on their phones. When they do so, the animation plays, informing them of what the Year 6 children like to do, what their their favourite sports and animals are, etc.

After that, the children used Aurasma to create a programme for the Christmas concert. Each pupil photographed a friend, then videoed that friend talking about what they had enjoyed during rehearsals for the concert. Some of the photographs were included on the concert tickets and in the programme. By scanning a picture using camera phones running the Aurasma application, parents were presented with the associated video and could see the pupils in the photos talking about what they enjoyed in rehearsals.

The main hall at Shaw Wood contains a display of all of the mobile apps our pupils and their eTwinning partners have recommended. To find out more about an app in the display, viewers can open up the Aurasma app on their mobile and point it at the picture of that app to watch a pupil-led video review of that application. Each app in the display also has a QR code; scanning this with a smartphone leads directly to the page for that application in either the Android Market or the Apple App Store – according to the device used to do the scanning.

This use of mobile technology has been extremely popular with the pupils, who are looking forward to using it in their modern foreign language lessons. It has also been very well-received by parents, who are enthused by the school's plan to use the Aurasma application more widely - for things such as including video messages in class newsletters and associating them with pieces of homework.

Register for free to continue reading
Registration is a free and easy way to support us.
When you register, you'll join a grassroots community where you can:
• Enjoy unlimited access to articles
• Get recommendations tailored to your interests
• Attend virtual events with our leading contributors
Register Now
Try Later
Already got an account?
Login
Read 6361 times
Tweet