The Bard’s Birthday: Shakespeare in the primary school

Alison Chaplin is the Manager of Arts On The Move, a company providing drama support for schools, including great Shakespeare workshops and play adaptations for KS2 and KS3.

Website: www.artsonthemove.co.uk Email This email address is being protected from spambots. You need JavaScript enabled to view it.

As evidenced by Adele Devine’s superb piece on teaching Shakespeare, there’s clearly something about the playwright’s work that gets teachers all fired up. With the birthday of William Shakespeare getting closer, teacher and manager of Arts on the Move Alison Chaplin brings us her finest tips on enthralling your class in this world, and having a great time while you’re at it. 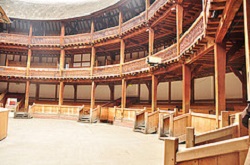 This April we commemorate Shakespeare’s 450th birthday, and hundreds of primary school children across the country will join in this momentous occasion by taking part in organised celebrations. However, a great number of primary school teachers already celebrate Shakespeare in their own way. Schemes of work that explore Macbeth or Romeo & Juliet are already fully integrated into the Primary Framework for Literacy objectives in many primary schools, with teachers attacking the stories, characters and themes with gusto. But for every teacher who loves tackling Shakespeare, there are many who don’t. The literary experiences we have as children, when we first encounter the beautiful Bard, can either make us or break us for life. But, fear not, for help is out there…

My advice when approaching Shakespeare in the primary school is to introduce it by stealth. Find ways of catching the attention of the children and drawing them in to the whole story. For example, describe a specific setting for a scene from a play – a good one is Act 3 Scene 3 from Macbeth - the murder scene*. As far as setting descriptions go there isn’t much information to be found in the text, but some clues are there and what isn’t specified you can surmise (or make up!): it’s night time; a faint torch light can be seen, held by an unseen hand; the setting is a park near the palace, there are trees casting shadows, low bushes and rocky outcrops; the sky is full of rain clouds; it’s spooky.

Ask the children to draw this scene – using chalks on black paper, or inks, or pastel crayons, or using whatever medium you think will suit. When the drawings are completed, discuss them – paying particular attention to how atmospheric they are – and THEN tell them that this is a murder scene. And, right there, you’ve got them. From that point you can fill in the gaps: let them know that it’s Banquo who was murdered and that his murder was arranged by his best friend, a man called Macbeth. Ask why they think someone would murder their best friend – jealousy, anger, revenge, fear – the discussions should be quite lively! Then rewind and let them know where the story originates. It isn’t strictly necessary for your revelations to follow a linear structure, though; you can feed information as and when by simply answering their questions, or start from the beginning if that’s a more comfortable option.

Other ideas for approaches to pique their interest include you creating love letters between Romeo and Juliet, in which they frantically discuss his banishment and her imminent marriage to Paris. We should feel their despair at the terrible situation they’re in. Okay, so this didn’t happen, but it’s a way in! Create these letters on parchment, or something equally effective, and write them using an ink pen to make them seem realistic. You could even age the paper by soaking it in cold tea! From here you can discuss who these people are, what their dilemma is, and what they should do. Then, again, rewind or fill in the gaps.

Hamlet can be explored by creating a confession written by King Claudius – where he reveals that he murdered his brother and then married the same dead brother’s wife – all for the power of the throne. Put King Claudius on trial. Have defence and prosecution witnesses, including, for example, Hamlet (prosecution) and Queen Gertrude (defence – remember, she doesn’t know about the murder!). Through this, you can build a case by exploring the story and, consequently, finding more witnesses for either side. This method works because the whole story of Hamlet centres upon his desire to avenge his father’s death – and the bang-to-rights guilt of Claudius!

Be creative, be inventive. Don’t feel that you have to tackle the plays in full but, instead, find ways of introducing specific characters, themes, pivotal moments, or even sections of text that will engage your children and make them want to know more. And, remember that support is available in many forms…

There are some excellent books available on teaching primary Shakespeare: ‘A Practical Guide to Shakespeare for the Primary School’ by John Doona (Publ. Routledge) is a great resource, as is ‘Beginning Shakespeare 4-11’ by Joe Winston and Miles Tandy (Publ. Routledge). Both reasonably priced, both full of great ideas.

David Farmer, of Drama Resource, runs an excellent course on ‘Teaching Shakespeare to 7-14 Year Olds’; visit the website at www.dramaresource.com for more information.

And, of course, there are organised celebrations out there to give you additional support throughout 2014 and to provide wonderful opportunities for you and your students: Shakespeare Week (www.shakespeareweek.org.uk) runs from 17th – 23rd March, and is a nationwide festival presenting an exciting programme of events and activities for schools and families that have been offered by arts and heritage organisations across the country. The Shakespeare Schools Festival (www.ssf.uk.com) is the UK’s largest youth drama festival and offers students, aged 8-18 and from all backgrounds, the opportunity to perform Shakespeare on their local professional stage.

Shakespeare still inspires. His themes of love, friendship, jealousy, betrayal, revenge are just as relevant today as they were over 400 years ago – you only need to watch an episode of EastEnders to see that! Shakespeare’s characters are three-dimensional, full of anger and desire, hopeless dreams and unrequited love – again, see any modern soap – and will resonate with young people if introduced in a way that generates excitement. Shakespeare has given us some of the best, most poignant, most dramatic, most heartfelt moments in literacy. This year we celebrate his special birthday, yes, but we should celebrate him and his works all year round.

*I use the Heinemann Shakespeare version of Macbeth, ISBN 9780435192037, because it’s full of fabulous notes, ideas and activities to support learning and understanding of the play