Top 8 video communication apps for learning on the iPad

Nik has been involved in ELT since 1992, having worked as a language teacher, teacher trainer and technology trainer. His current position is a freelance learning technology consultant.

Website: nikpeachey.blogspot.co.uk Email This email address is being protected from spambots. You need JavaScript enabled to view it.

The iPad camera has so much potential in classrooms, however the camera app itself is limited in its features. With his experience of using video apps with students, Nik Peachey lists the best ones for enabling teachers to add annotations and commentaries to recorded video, and use video for creating journals, storytelling and speaking practice. 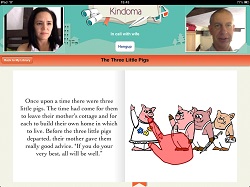 One of the great things about mobile devices such as tablets, iPads and phones is that most modern devices have good quality cameras and microphones built in.

This opens up a really wide range of potential for communication and speaking practice that used to be such a struggle to organise on older laptops and desktop computers.

App developers have also been quick to exploit the potential of this powerful tool and in this post I'd like to look at some of the tools that have been created and how they can be used for language development.