Inspiration from e-sports takes online education to a new level

Written by  Chalmers University of Technology

Chalmers University of Technology in Gothenburg, Sweden, conducts research and education in technology and natural sciences at a high international level. The university has 3100 employees and 10,000 students, and offers education in engineering, science, shipping and architecture.

Website: www.chalmers.se/en/ Email This email address is being protected from spambots. You need JavaScript enabled to view it. 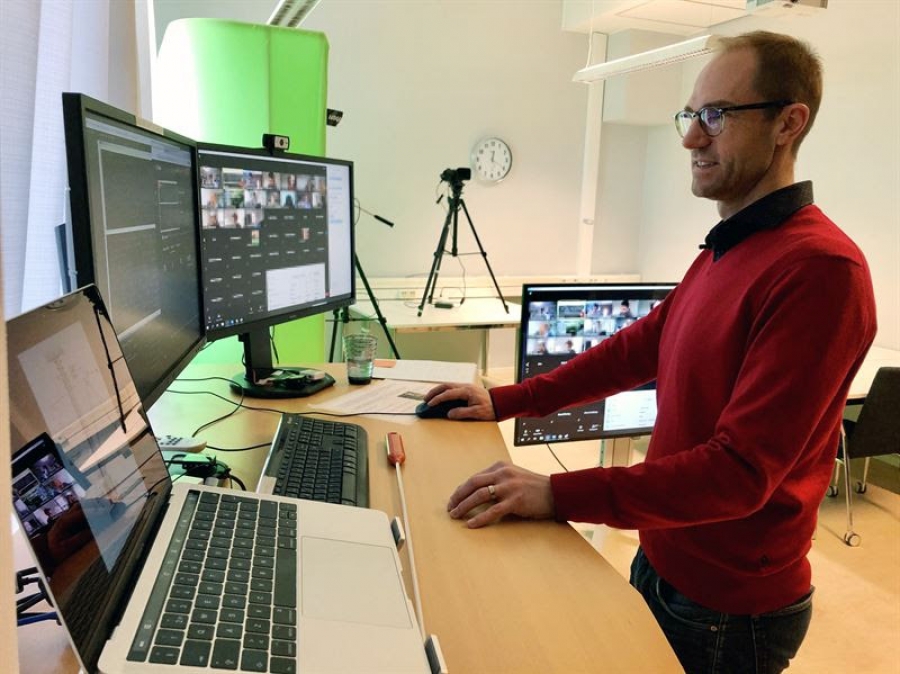 E-sports professionals, Youtubers or physics professors? Perhaps the differences are less than you might think. That is, when it comes to the technical equipment necessary for interacting with the viewers, or, in this case – the students.

When the coronavirus pandemic forced a rapid transition to remote education last spring, teachers and lecturers were faced with great challenges, but also with new opportunities.

At Chalmers University of Technology, Sweden, two physics professors took inspiration and technical know-how from the world of e-sports to make their online teaching as effective as possible for the students. Professional e-sports players who stream their gaming sessions live are well practised in making sure their viewers can follow along with the action, discerning all the subtle details of the game and being able to interact with the streamer.

“We realised pretty quickly that we could learn and benefit from the expertise and technical solutions that have been developed over a long period of time by professional e-sports streamers, and apply them in an education environment, to create a distance learning studio,” says Andreas Isacsson, Professor at the Department of Physics at Chalmers.

To understand the concept, the professors studied in detail the technical setups of several experienced e-sports professionals and successful Youtubers for live streaming and interaction with their co-players and followers.

Now, Andreas Isacsson and his colleague Philippe Tassin have built two teaching studios with several webcams, a high-quality video camera, a specially optimised computer, wireless microphones and more. The cameras allow the students to view, for example, detailed calculations written on a blackboard, much like in a traditional lecture. The studios are in high demand for teaching physics students at Chalmers.

According to the five course evaluations carried out so far, the concept has been enthusiastically received by the students.

“The professors have really handled it well based on the circumstances. They are really trying to do everything they can to make the teaching as successful as possible for us,” says Rebecka Mårtensson, a first-year student at Chalmers.

The success of the studios has recently been evidenced by the fact the professors were awarded the educational prize “Guldkritan” (The Golden Chalk) from the physics students, for their remote education efforts.

The distance learning studios have also received a lot of attention from teaching colleagues at Chalmers since the start of the semester last autumn. More and more students have had their lectures broadcast from there as the academic year has progressed.

The new concept makes it easier for lecturers too, whose workloads have increased greatly due to the pandemic.

“By being able to give the lectures in a more usual environment, the transition to distance education is much less labour-intensive. And since the students appreciate this form of teaching, it is a clear win-win situation,” says Professor Ulf Gran, Vice Head of the Department of Physics, pictured above.